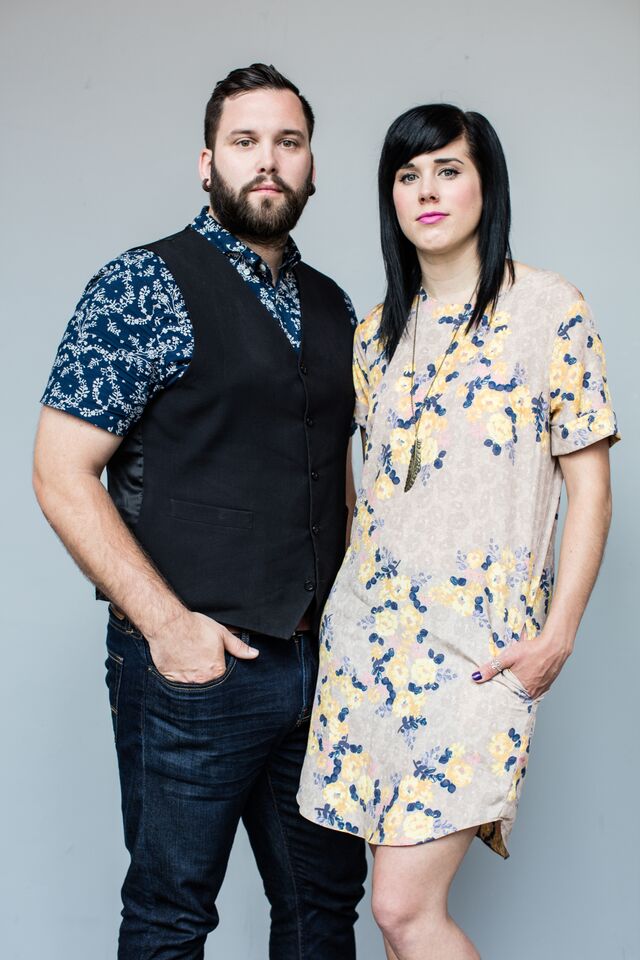 St. John’s NL folk/pop duo, Fortunate Ones is made up of Andrew James O’Brien and Catherine Allan. The duo released their debut album, “The Bliss” back in February and since then has been nominated for three Canadian Folk Music Awards, as well as been picked for the Allan Slaight JUNO Master Class which will take place from October 26-30.

We had the chance to ask the duo a few questions about their background, their music and so much more, keep reading to learn lots about Fortunate Ones!

Hi there! We are Fortunate Ones from St. John’s, Newfoundland. We are a folk/pop duo of Catherine Allan (Vocals/ Keyboard/ Accordion/ Percussion) and Andrew James O’Brien (Vocals/ Kick Drum/ Guitar).

How did you meet and form Fortunate Ones?

Andrew: We met in 2010 at my apartment in downtown St. John’s. Catherine’s brother and I were rehearsing songs at the time and Catherine came by to the rehearsal. During a break, she started singing and I had to sing with her. Her voice was amazing. The next day she learned some of my songs and we were singing on stage together that night.

You released your debut album, “The Bliss” in February, how has the response from fans been?

The response to the record and the live shows has been amazing. The crowds keep growing and tours get longer. We’re always blown away by h ow generous and kind our audiences are, singing along with us, sharing in this music with us. It’s an honour to do what we do.

Andrew: We’ve learned to play to each other’s strengths. I will often have lyrics that I’ve written that will need a melodic lift or the addition of instrumentation. Catherine has a fantastic ear for melody so we will often bring pieces of the songs or ideas and marry them in rehearsal.

We tend to write about our lives and experiences. Time is a big theme for us: it’s passing, our inability to hold onto it. Coming to terms with where you are in the world, being okay with the lack of control and trying to be present in the moment.

You worked with Daniel Ledwell on the album, how was that experience?

We made the record at Daniel’s studio in Lake Echo, Nova Scotia. The studio itself is tucked away in the woods on the shore of a beautiful lake. We recorded in the middle of winter and the forest gave us an isolation that allowed for us to completely focus on the making of the album. Dan was incredibly disarming and creative as a producer. He pushed us out of our musical comfort zones while still maintaining the vision that is at the core of our sound. He made us feel welcome in his home and that warmth and ease made it’s way onto the album.

You were recently one of the artists picked for the Allan Slaight JUNO Master Class, how does that feel?

We’re honoured to be a part of the inaugural class. We’re excited to take in as much knowledge as we can and to be able to work side by side with some of the country’s most respected artists and industry professionals. It feels amazing to be considered for such an important and beneficial opportunity.

What are you most looking forward to about heading to Toronto for the Allan Slaight JUNO Master Class?

We’re looking forward to learning from professionals that have been through the growth we are experiencing, meeting and making relationships with people who believe that we are wroth their investment and getting insight into how we can improve upon what we’ve been doing in our career so far.

Recently, it was announced that you are nominated for three Canadian Folk Music Awards, take us back to when you got the news, what was your first reaction?

Andrew:I was out for lunch with my brother when Catherine called me, laugh crying. She was home alone and was elated to hear about the news. She was crying and laughing and wanted me to come home so she didn’t have to cry and laugh by herself. haha

You recently did some shows as part of the Festival of Small Halls, how did they go?

The Small Halls festivals are amazing. The volunteers and organizers make us feel like a million bucks. They are so respectful and kindhearted, the shows are always sold out and the audiences are so genuinely happy to be able to take part in the event, that it makes our job incredibly easy to do.

On top of all of this, you are about to head out on tour, with various stops in BC, MB, SK, AB and ON, is there a stop on the tour that you are most excited about?

We’re excited to get on the road in general.Being out on tour is what we do best and we’re so excited to play for new and current fans alike! We get to see so much of this country and as hard as the work can get, we never lose sight of how lucky we are to be doing this. We try our best to project that feeling wherever we go.

When can fans on the East Coast expect more tour dates?

They’re in the works as we speak!

If someone has yet to see you live, what can they expect from your show?

There are two of us on stage so we do our best to make the show as musically dynamic as possible. We run the spectrum from full on bass drum driven, driving songs to quiet and introspective ballads. We love to harmonize and that plays a huge role in the performances. We want the show to have an arc and not just be a collection of songs, one after the other. We’re having so much fun on stage and we do our best to make the audience feel that they are part of that. We tend to carry on with each other on stage. We laugh, joke and sincerely enjoy the shows. We hope that this translates with our audiences.