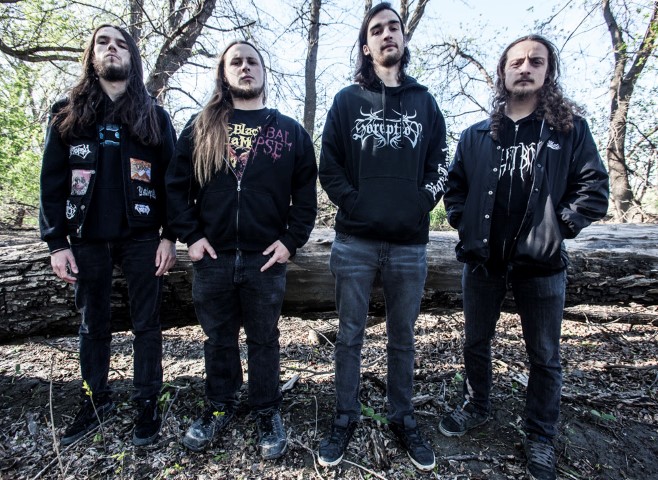 Winnipeg death metal hammers, Inverted Serenity are on the verge of releasing a new album called “Integral”, following up 2013’s “Manifestations Of Eternity In A World Of Time”. I hit up the band for an interview to get the down low on the album and find out what the future holds for Inverted Serenity.

Welcome back guys, how are you?

We are doing great! Lots of momentum as a band with this new material under our wings.

What have you been up to leading up to Integral’s release?

We have been tightening things down at rehearsals for the release date as we will be sharing the stage with Soulfly. We have also been working on ideas for the next album to follow this release of ‘Integral’ already. A very satisfying and refreshing feeling.

For people just learning of your existence, who’s in the band and how did you get formed?

Founding our project in 2009, our original members Tomas Ingham and Ben Deveau, based out of Lac du Bonnet, Manitoba, decided during a class at their high school that it was time to form a band. The two childhood friends grew up occasionally playing music together and shared almost an exact taste in music and artistic philosophy. Inspiration came from several local bands of the Eastern Manitoba region, which included some of our closest friends and eventual official members of our band in the years following the formation. Our guitarists Drew, and Marco joined the team down the road.

Tell me about the new album, how long did it take you to finish?

The upcoming album “Integral” was about a two year process which began even before the release of our first album in June of 2013. The writing of the instrumentation took about a year until we began pre-production in the Summer of 2014 with Iko Lucic. The lyrics took their completed form during the final stages of recording during the Winter months of early 2015 at Jon Warren Productions. The variety in song structure is across the board in every particular piece. The riffs range from atmospheric black-metal grooves, old-school inspired death metal passages, thrash riffs, progressive technical journeys and everything in between. The lyrical themes are based on profound transcendental philosophies all co-relating the concept of the album of “integrating all” through the process of consciously becoming whole. We placed much discussion, thought, and care into every aspect of this album and we are certain that our fans will agree that this is our most impressive and well put together material on our journey as a band thus far.

Was it difficult to write?

The writing process came rather naturally.  The only difficult part was deciding on album art, which we ended up creating ourselves.

Your music is very interesting in that your songs borrow heavily from a number of genres, can fans expect that on this album or is Integral something new?

Integral is a huge step forward for us. The main aspect of our music’s evolution that is apparent when one listens to our discography, is the increase in technicality. As the band grew the songs become more mature in their structure, and they also have larger degrees of atmosphere particularly in the blackened pieces on the new album. We never stick to the same formulas in song structure and in doing so allows for a constant process of audio evolution.

Tell me about the writing process, how did you start putting this album together?

There is no real set procedure for writing aside from the constant hybridization of ideas as a group. We throw general ideas out on the table for each other and work together on how to explore them further, usually adding more complex layers, but we also may decide on simplifying riffs to give songs the ability to breathe and maintain the catchy hook driven melodies that keep one’s head banging. Ideas are often recorded to a mobile phone or pen is put to paper until we get together and share the music’s dynamics face to face. We even created three separate songs based off a medley of riffs Ben had saved up over the years which now are part of the tracks titled ‘Grasp of Impermanence’, ‘Coeur’, and ‘Breath of Life.” Since our lineup has remained stable for a couple years we know what we can expect from each other in terms of skill and malleability which will only help us in the long run as growing musicians. We are open to any and all functions of being able to create music together.

Where did you record Integral and who produced it?

We recording the album in the Eastern realm of Winnipeg. It was recorded and produced by our engineer Jon Warren. Jon also plays guitar for a solid Winnipeg thrash band called Alphakill.

Who would you say is you biggest musical influence?

For us, collectively, bands like Decrepit Birth, Decapitated, Meshuggah, Beyond Creation, Lamb of God, and Gojira is a good general idea of where we get our inspiration.

When writing music do you have the audience in mind or do you write what you would like to listen to?

Normally its about what we want to hear. Once the songs are solidified at practices we then decide on ideas as to how to involve the audience as much as we can.

What are the bands plan following the album release? Any touring?

We will be playing a few more local shows this winter and then will be setting our sights on Western Canada for some touring and we are determined to make appearances at some of the major metal festivals across Canada.

Where would you like to play and with who?

All over the world with anyone who shares the love of music that we reflect.

Do you have a favorite Canadian band?

What do you think of the music scene in Canada, and what is it like in Manitoba?

It’s a very tight nit scene and the people that are in it are passionate and driven. We are lucky to have the support network we do living in this frozen prairie part of Canada.

Share this:
Related ItemsAsher Media RelationsCanadian MetalIntegralInverted SerenityManifestations Of Eternity In A World Of TimeManitobaManitoba MusicMetalWinnipeg MB
← Previous Story Shout Out from The Tourist Company
Next Story → Interview – David James