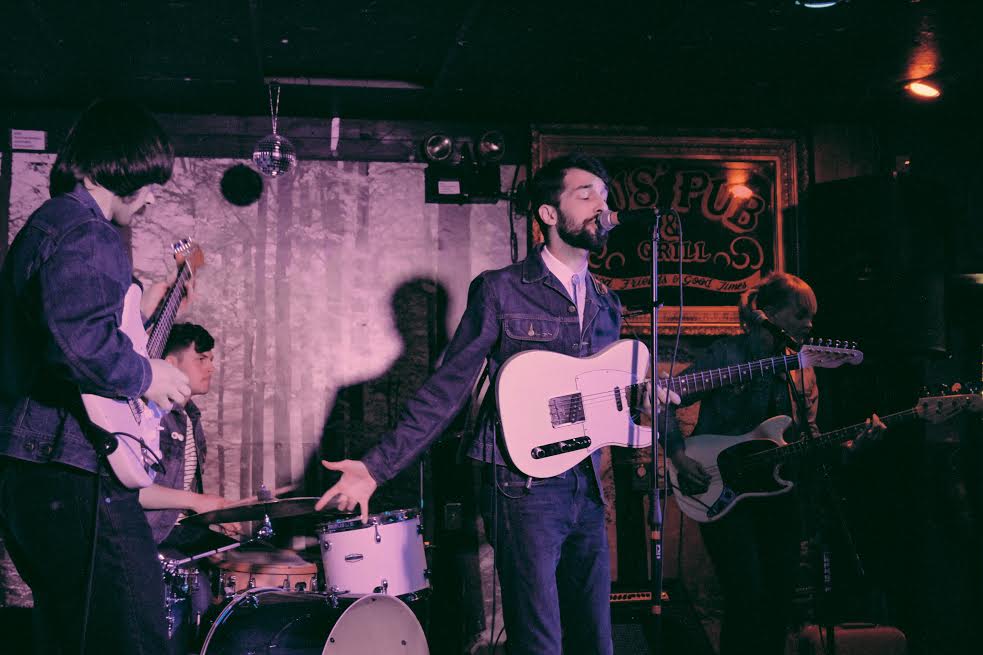 Run Coyote are a 4 piece indie rock band based out of Kitchener/London. They’ve just released a new music video for their song “Love Like a River” which has been gaining air play on CBC Radio One across Ontario and they are currently on tour across Canada supporting their debut album Youth Haunts. Check out our interview with them below.

Can you tell us a little bit about the band for those who are unfamiliar with you?

Sam Allen: We’re a Canadian rock’n’roll band. We wear denim jackets and encourage our fans to as well. We like Spaghetti Western riffs, Freshii, the Canadian Shield, and spooky folk music. We’re basically a family band.

You just released the music video for Love Like a River which features Wilfrid Laurier University swimmer, Kate Vanderbeek training in a pool. How did that idea come together?

SA: Our bassist/vocalist Amanda Grant came up with the concept and everyone liked it. We thought that shots of a pool and water would make for cool visuals, along with Kate’s training synced up with the song. “Love Like a River” has a driving, repetitive rhythm like swimming laps. My brother Joe has a friend named Matt MacDonald. Joe showed us Matt’s unofficial music video for St. Vincent’s “Prince Johnny” and we really liked it. So, we met with Matt about our idea and he liked it and was awesome in bringing our idea to life. Matt heads the production company King Kitty Productions. Amanda found Kate through the Laurier Swim Program – she’s the team captain. Kate was great to work with, very accommodating and cooperative. She brought a lot of her own ideas and experience to the film. We’re really happy with how it turned out.

Love Like a River has also been in rotation on CBC Radio One across Ontario. Have you heard it on the radio yet? How does it feel having a song on CBC?

SA: I have heard it. It’s always exciting to hear your music played on the radio – especially when it’s CBC. The first time they played it we were in the car and rolled down the windows and blasted it down the highway, dancing in our seats.

Your debut album Youth Haunts was released in October 2014. What was the writing and recording process like for the album?

SA: I wrote the songs and then brought them to the band to develop. Since it was our first album, the songs had some time to grow before we went in to record them. It’s really cool to have the ideas in your head come to life with a group. We recorded the album with one of our best friends, Simon Larochette. He has a studio called The Sugar Shack in London, Ontario. We have a great working relationship with Simon – we have lots of fun and get lots of work done. I really feel like Simon is able to push me to my best and I’m able to push him to his best. Since we’re friends first, we’re comfortable working this way.

Do you have a favourite track from the album?

SA: Today it’s “Only Human.” But another best friend, Kelly Wallraff, did a beautiful string part for “Meadow Boy,” which we don’t play live, so it’s a special part of the album experience.

Youth Haunts was named a top pick of the week in Ontario by CBC Radio’s In the Key of C. What was your reaction when you found out?

SA: It’s an honour to be recognized – especially by the CBC, which we value and respect.

Since you’ve been touring in support of Youth Haunts over the last year, do you have any fun tour stories you can tell us?

SA: We were on tour in Halifax with a band called Fever Feel playing Gus’ Pub – a local institution. We were on a great bill with Willie Stratton and Leopardism. The crowd was roaring. But, we lost track of time and Gus’ had to close before Fever Feel played. Dave from Willie’s band runs the Open Mic House down the road from Gus’, so we all picked up Fever Feel’s gear and carried it down the block – a line of musicians silhouetted by the street lights. We finished the night off with an intimate, late night house show in Halifax with a rock’n’roll band from Calgary. On the road, sometimes bad news or a weird change turns into the best night of tour. We had a similar experience in Quebec City on another trip.

What songs have been getting the best crowd reaction?

SA: I think, “Wreck of a Man,” “Rain On” and a Lee Hazlewood cover we do called “Look at that Woman.” Those get me going, anyway.

What are you most excited for on the rest of the tour?

SA: Performing for audiences – connecting with people through music. I love meeting people and sharing our music with them.

What would your dream tour lineup be?

Since we’re all about Canadian music, who are some of your favourite Canadian bands/artists?

SA: Right now we’re really into the new Ought record. We’re big fans of Timber Timbre. Amanda and I love The Weather Station.