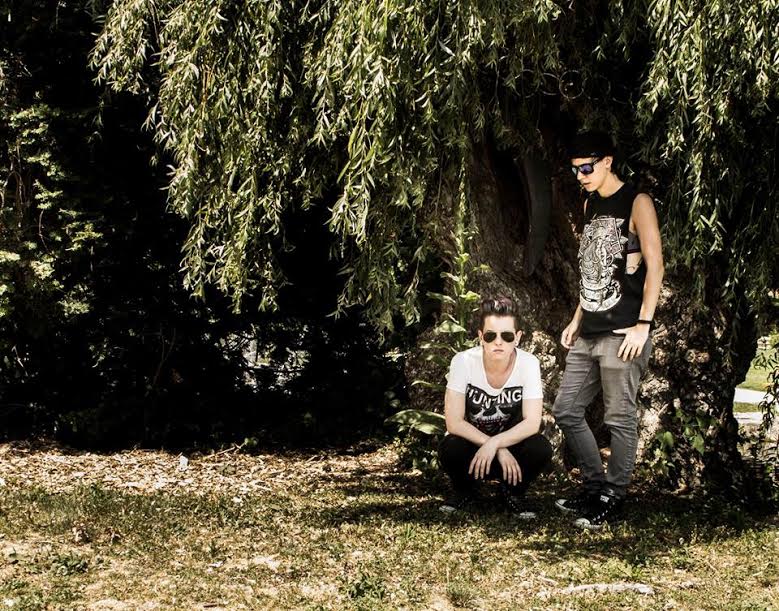 In just one year, Toronto’s female rock duo, Kink, have played Warped Tour and released a new album. They have recently launched a Guitars for Girls initiative which is their attempt at making rock music more accessible to women.

Sure thing! We are KINK – Dani and Erica, from Toronto. Our music is a pretty unique mix between pop punk and alternative rock. We like to joke around that we’re a mix of Tegan and Sara, Alice in Chains and Blink 182.

Your first album, Fine Lines, was released this past summer. What was the writing and recording process like?

Both were extremely exciting! We wrote the songs for the album (and about 5 more) all within a few months, working every day and night together completely focused and motivated on our task. We knew exactly the kind of music we wanted to create, and what our long-term goals were. Honestly we were both fuelled by how well we wrote together! The recording process was intense – we spent over a week, 14 hours a day, in studio with our amazing producer (Jason Pierce), an amazing team and great session musicians that made our experience a dream come true.

Did you know what sound you were going for right from the beginning or did it just come together as more songs were written?

Before we started the band, we actually talked the whole thing over for hours. It was really important for the both of us to know exactly what we were getting into and decide the genre of music that we wanted to create – we wanted it to be different and unique but also containing some key elements from some of our biggest rock influences.

Vans Warped Tour is a dream for many punk/rock bands and you played it after only being a band for a year. How did the opportunity arise? What was your favourite part?

Yeah! Getting the call that we were chosen to play pretty much blew our minds. We played the Toronto Vans Warped Tour, and it was amazing. We spent the entire day meeting kids and giving away music and stickers. Totally fun connecting with current and new fans! The opportunity arose through our producer, Jason Pierce, who sent in our single Fine Lines and they dug it enough to have us play! It was crazy because we hadn’t yet played a show as a full band – we had to pull that together super quickly, and luckily we have some friends who are great musicians so the show turned out great.

Guitars for Girls is an initiative that you started to help get more girls into playing rock music. Why did you decide to start this?

It drives us crazy seeing people talk all the time about how there needs to be change within the industry, but rarely act on it. So we decided to do just that, and we are still accepting and donating guitars to girls in need in Toronto. We both grew up listening and idolizing female musicians and ultimately we want to inspire and challenge young girls who want to follow their dreams.

What do you hope to see from this initiative?

We would really like to see it expand to other major cities across North America. Here in Toronto we have already given about 15 guitars away to girls at Dixon Hall, a charity-based music program. We are hoping to get some major female musicians involved in this and a long-term guitar sponsor so we can get more girls playing guitar nation-wide.

We have been playing shows across Ontario/Quebec for the last year (a lot of bands would call it touring, but we call it driving around home :)) so if we are talking touring outside of those provinces or Canada, nothing official yet, but there are definitely things in the works. We are really focusing on getting as many people as possible listening to our album and getting stoked on it. We want to make sure when we do tour, that there are people wanting us to come play in their cities and not just because we want to be a “touring band”.

We are playing a show Nov 13th in Oshawa at The Atria opening for Bloody Diamonds, and we have a bunch of other gigs coming up across Ontario (check it all outwww.kinktheband.com/shows)

That is a good question! I think that depends on if we are playing an acoustic set (which happens often), or full band. Acoustic we both really like playing Antidote. As a full band we really enjoy rocking out to Fine Lines.

We actually have a huge fan (his name is Clarke) and he is 15. He found us on Twitter, and the best fan moment for the both of us was watching him front row at Warped Tour, wearing our merch and singing along to every lyric of every song we played. It was super cool. But aside from that, we have these great fan moments every day because we are really active on Twitter/Facebook and love connecting with new people and asking them about what they think of the album. It’s always fun to hear people’s opinions on the songs, album artwork and our videos!

Anyone? Yes, I think we could probably name a few haha – If we could collaborate with ANYONE I think Taylor Momsen from The Pretty Reckless would be on that list. Maybe doing something eventually with Brody Dalle (The Distillers) or even Tegan and Sara would be something super fun! Or basically we would do anything to collaborate with Maynard (Tool and A Perfect Circle) or Ken Andrews (Failure, Year of the Rabbit).

Dani is a closeted Bieber fan (guess not so closeted anymore), and Erica loves Billy Talent but the both of us really like Tegan and Sara, Metric, Marianas Trench, and July Talk.