By Lindsay Newman on October 10, 2015@https://twitter.com/lindsaynewman_ 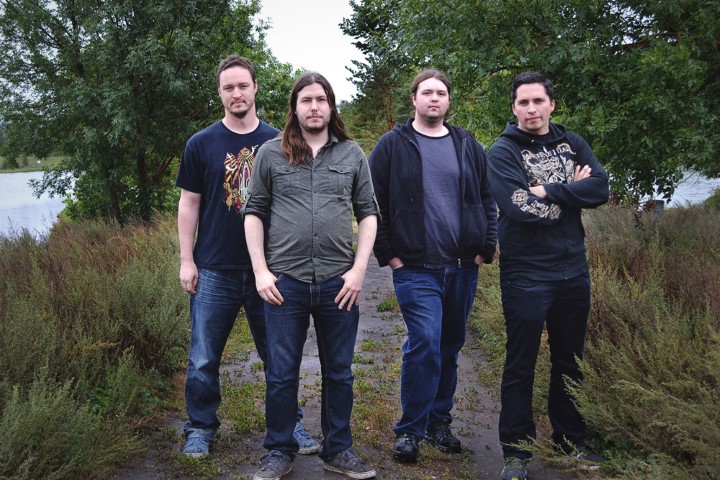 Formed in 2008 Edmonton metal band Silent Line are about to release their third album “Shattered Shores”, which is set for release on October 30th. This album is a concept album this is the band’s first attempt at one. On October 30th make sure to check out the new album from Silent Line.

We all grew up in the same small town – Bonnyville, Alberta – and there really isn’t much to do there and since we all loved music, we decided to form a band. We were all in the same group of friends, so it was easy to get along. Like most bands we originally just played covers, but it wasn’t long before we wanted to make our own music.

What was the writing process like for the new album?

It was a bit longer of a process than our other albums, but I think it shows. We really took our time to make sure we were happy with the songs. Most of the writing was done in the basement studio we run and involved myself (Mike), Randy, Adam, and Andy. We usually start with guitar riffs and drums to get the feel and structure of the song before adding in bass and synth/strings for extra depth. Lots of the orchestrations were done after everything was recorded so we could experiment with them. By the end of the tracking and mixing process we had around 120 tracks per song, we were going for that Devon Townsend and Wintersun “Wall of Sound” mix. Most of these tracks are effects and different orchestra components such as violin, cello, percussion, and choir sections to offer counter-melodies and harmonies to the main riffs in the song.

What made you guys want to pursue a career in music?

As I mentioned before, we all love music. After the first time seeing a live metal show in Edmonton, we knew that this is what we really wanted to do. The energy of a live metal show is something that doesn’t exist anywhere else, and we have always wanted to share our music with as many people as possible. If we are able to instill that same feeling in others, it would mean the world.

Who are some of the bands influences?

Definitely In Flames, Dark Tranquillity, At the Gates, Amon Amarth, and Wintersun. Those are the big ones, but we also love the Devon Townsend Project and many of the classic metal bands that should go without saying.

What made you guys decide that you wanted to do a concept album?

I know that not everyone in the band is a fan of Coheed and Cambria, but I sure am. For those who don’t know, all of the albums – except their most recent – are concept albums. To me, this style of writing brings cohesion to the album; it makes it feel like a more complete and more meaningful experience. I am a huge fan of tying in lyrics and riffs from different songs, for example, the verse riff and chorus are the same in Shattered Shores I: Timeless Night, and Shattered Shores II: A New Beginning. They are in different tunings and have their own unique versions of the lyrics overtop of them, but for the most part they share riffs and vocals. I hope that it helps people connect to the music in a more personal manner.

How has the response been for the 1st single, Shattered Shores: Timeless Night?

So far it has been great! People seem to enjoy the new direction we are going in and we couldn’t be happier with the response. However, we do take criticism seriously and we are not afraid of hearing honest opinions. We’d rather hear an honest opinion than someone blowing smoke up our asses.

At Canadian Beats, we like to ask fun questions to help fans get to know you better, so here goes:

What is your favourite part about thanksgiving?

The gravy boat, without a doubt. A swimming pool wouldn’t hold enough gravy to satisfy our needs.

If you could perform with anyone alive or dead who would it be?

Performing with In Flames would be unbelievable; we have already had the honor of opening for Dark Tranquillity and Insomnium, so we are slowly crossing off our bucket list. One day…

What do you like most about living in Edmonton?

The people in the local scene are amazing, hard working individuals. Without the promoters and fans that exist here, we would be in a rough spot. Also the Telus World of Science.

What is your favourite part about performing at a concert?

It would be just that: performing. Seeing the crowd getting into it – or even when they don’t – is the best feeling in the world. Being at a show, hanging out with the other bands and meeting fans is all part of the performance, and we enjoy every minute of it from when we arrive til we leave.

What is your favourite thing about fall?

I think it goes without saying that fall is beautiful, but it also means we’re almost at the halfway point til new “Game of Thrones”.

Yes: to all of our current fans, thank you for sticking with us and supporting your local scene. To all the people hearing us for the first time, we hope you enjoy our music enough to come see us live sometime! We’ll have a beer or three with you in our van.