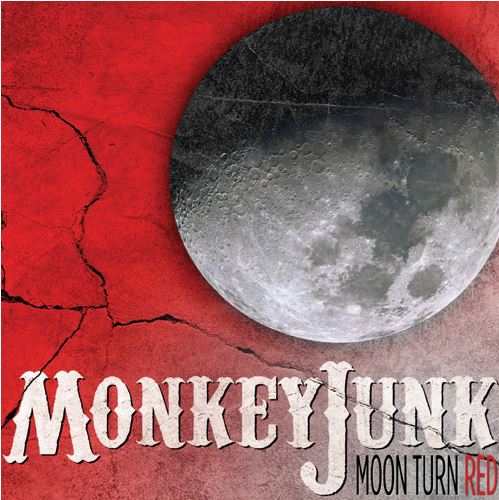 Ottawa, ON based trio, MonkeyJunk is made up of Tony D (Guitar/Slide Guitar/ Vocals), Steve Marriner (Vocals/ Harmonica/ Baritone Guitar) & Matt Sobb (Drums/ Cymbals/ Percussion/ Vocals). The band has been around since 2008 and has just released their new album, “Moon Turns Red” on September 25, 2015 through Stony Plain Records.

“Moon Turn Red” consists of ten tracks, including a cover of the classic David Wilcox track, “Hot Hot Papa”, in which David Wilcox is featured.

The whole album is noteworthy and shows the bands talent and dedication to their music, although I had two songs that stood out to me. “Light It Up” is the first on the album and pulls you in right away, with the intense Blues/ Rock sound and addictive lyrics. The other that I can’t get out of my head is the eighth song, “Lucky One”. It features a highly contagious beat and lyrics that you can’t help but sing along with.

If you’re looking for a high energy album, this may be the one you have been waiting for.  MonkeyJunk excels at what they do, and if you’re into roots, blues or rock, I recommend you check this out!