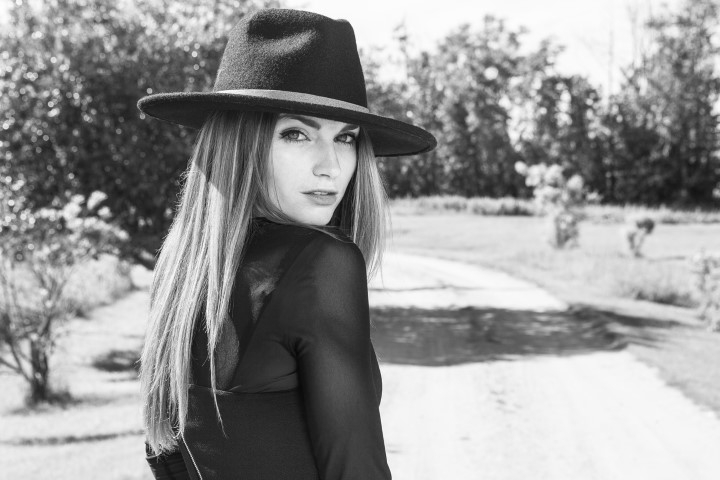 Originally from a small town in Manitoba, Amy Metcalfe is a country singer/songwriter signed to Royalty Records and is now based in Alberta. She released a single, “Whiskey Won’t Fix Me”, featuring Tristan Horncastle, in June of this year, and also her EP ‘Inside Out’, which was released in April. You’re going to want to check out Amy’s music so be sure to check out all the links below.

You’ve co-written with many talented people, such as Byron Hill (Gord Bamford) and Phil Madeira (Garth Brooks), as well as have an impressive amount of solo writing under your belt. Do you prefer writing with other people or on your own?

It really depends on the song honestly. Some songs I would rather finish alone, others I start and know it needs something else or someone rather 🙂

There are usually a few different ways I write. Sometimes I get a title in my head and I just put it in my phone, write it later when I have time or bring it to a co-write. Other times it just takes over and I have the whole chorus and melody regardless of where I am.

U2, The Rankin Family, Taylor Swift, Johnny Cash, Brandi Carlile … a fairly eclectic bunch, but they all have something different to offer as far as influence in my life. Some strictly melodically, some performance wise and some personally.

How has the fan reaction to your new single been?

It’s been great, it’s the type of song people love right away which is what you need to break into radio. I’m really thankful for the support we’ve gotten on this track.

If someone hadn’t listened to your music before, is there a particular song they should start with?

Haha…Well it’s always hard as the artist to pick the right first song because there are a lot more factors than “you’ll like this one” but I spent about two days straight on the order of my album so I would have to say number one on the EP is “Senses.”

That people go there to actually listen to music! It’s refreshing and a great place to actually meet other artists as well.

Senses and The Story by Brandi Carlile

I have a lot of behind the scenes things going on right now. I’ve been exploring all sides of the entertainment industry and just got signed to an agency for commercial modelling and acting. Also have a lot of co-writes planned and looking forward to releasing 3 more singles from the EP! The next single will be out during the first week of January.

Here at Canadian Beats we like to throw in a few questions that help your fans get to know you a bit better:

Ahead of My Time – Teddy Bears

What’s your favourite thing to do in the summer?

Ride my horse and go to the lake.

If you were in charge of a weekend festival, who would be on the lineup? Dead or alive?

I’d pick artists that I know are great performers and that fans are going to go CRAZY for.

What are your must haves for tour?

Room temperature water, and my vocal chords…. a mic and guitar are good too.

Thank you for starting this adventure with me. I can’t wait to show you how much more I have planned!