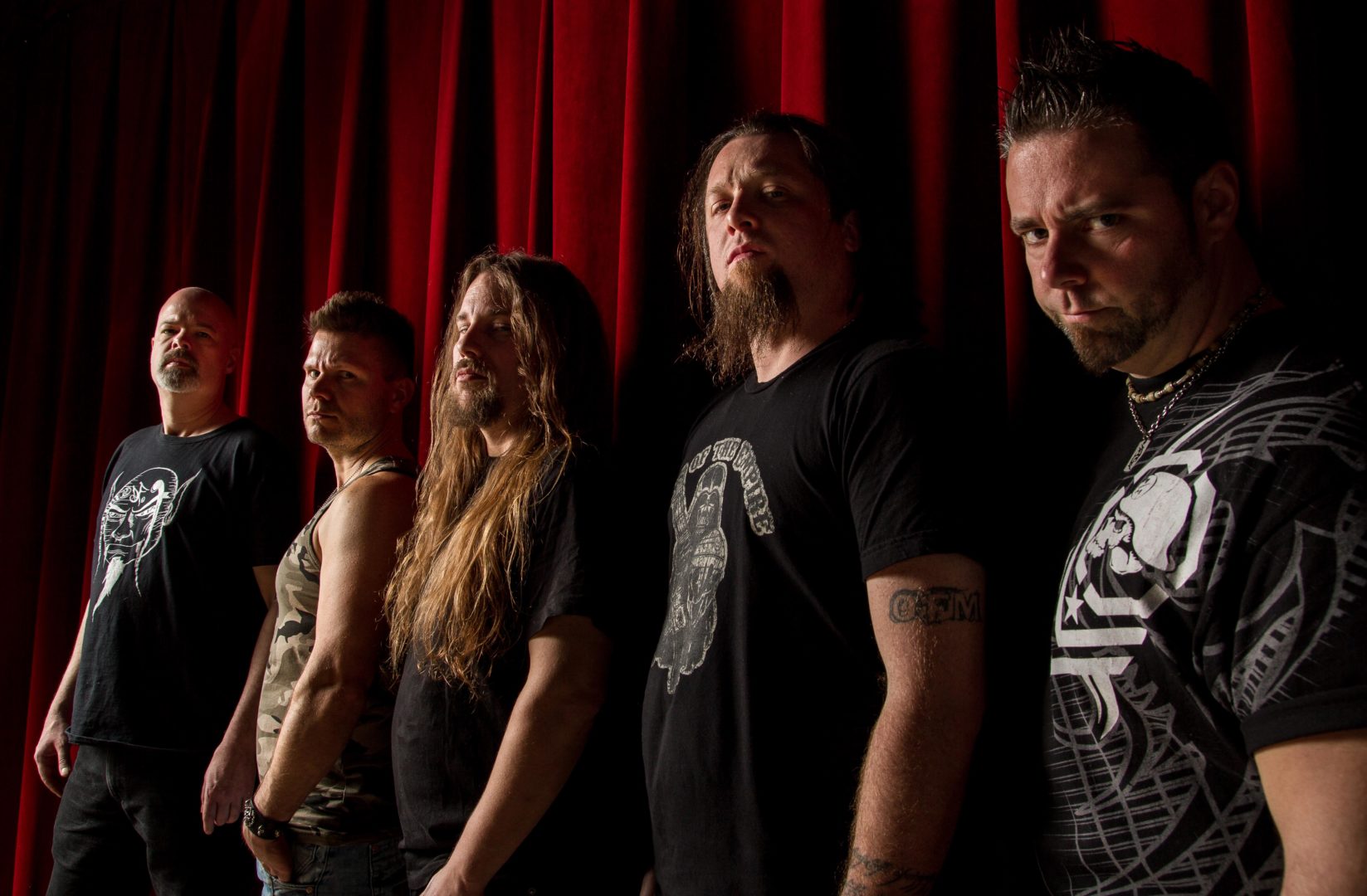 Montreal noisemakers, EVERTRAPPED are about to release their third opus “Under The Deep” and after listening to the single released in partnership with MetalNationNews, its clear that the album is going to fucking slay. I was lucky enough to have a little chat with the gentlemen who make up this monster of a band.

How is everything going guys? Getting excited about the album coming out?

Always! We’re exceptionally excited about this one we feel Under The Deep really captures the extent of the brutality we can put into our music.

Can you give me a brief history of the band for people new to your music? Who are the members?

The band started in 2007 and put out Tales From The Supermax and over the years members have come and gone even since the 2012 release The Anomaly. But the 5 guys you’ve got here are James Brookes on vocals, Fred Dupuis and Vincent Benoit on guitars, Eric Lemire on drums and John Yates on bass. That’s what you’re hearing on Under The Deep.

Tell me about what it was like to write this album, was there anything particularly challenging about it?

It was almost intimidating at times. You would listen to a written piece, and say ‘holy crap am I gonna be able to put something to this that matches up?’ But the tunes have always had that way about them even on The Anomaly. Just learning them can be a systematic challenge at times, but it’s really fun! Once it comes together it always feels epic.

What makes this album different then your previous efforts?

This album for one, is 100% new material. The Anomaly had 4 tracks that were redone from Tales From The Supermax. We didn’t feel they were done justice so we redid them. But this is all new. And we were really excited about that when it was coming together. And every time we saw how hard we would play with every new composition, it just made us want to go harder on the next one and thus Under The Deep was born.

Do you have a message in mind when it comes to your music, or do you prefer the fans to draw their own conclusions?

There are messages, and each song sort of has its own little story hidden behind abstract writing. But ultimately we enjoy the concept of the fans drawing their own conclusions. Art has always been meant to be interpreted by those enjoying it so the greatest complement would be for a fan to come up to us and say how a song inspired them and explain why but it turns out that what they interpreted from it was not at all what it’s about, but that doesn’t matter because that means that they were purely inspired by the music in its most abstract form.

You music seems very apocalyptic; do you feel that is where we are as a society?

Society is likely headed towards some kind of apocalypse but a social apocalypse in the literal sense of the expression. Since the human race will always only worry about something at the last minute when it’s almost too late, we may eventually run out resources or the sun might burn out or whatever, but before it gets to the point where anyone will start to think about it, society won’t be much to behold by then. Hell, we can’t even have a conversation with one another anymore without resorting to technological crutches. It’s so ridiculous it’s almost funny at this point.

Who does the artwork for EVERTRAPPED?

Philip Faith does all the artwork for us. The way he manipulates the images for us is unbelievable how we always end up with something that really captures what we’re going for.

We do it all ourselves. No studios. We have the programs, the knowledge, the gear and its way more satisfying like this. This way we can be assured that we really get the precise sound we want. So everything is self produced, but the bulk of that is really done by Fred Dupuis and Eric Lemire.

Do you plan on touring to support Under The Deep?

Dates are currently in the works, but we don’t have the full game plan yet. We would never give up the live aspect, so it won’t be long!

What are your thoughts on the Canadian metal scene?

There’s a tremendous amount of talent and kick ass metal in Canada. It just feels sometimes like there’s a certain lack of recognition outside of here, or perhaps outside of Montreal and Quebec anyway. Maybe it feels like to every band everywhere on earth but either there’s so much awesome metal in Montreal but it’s a tough climb.

October 16th, Under The Deep is here!! You know what to do…

Be sure to check out the official video for “Underneath The Deep”: