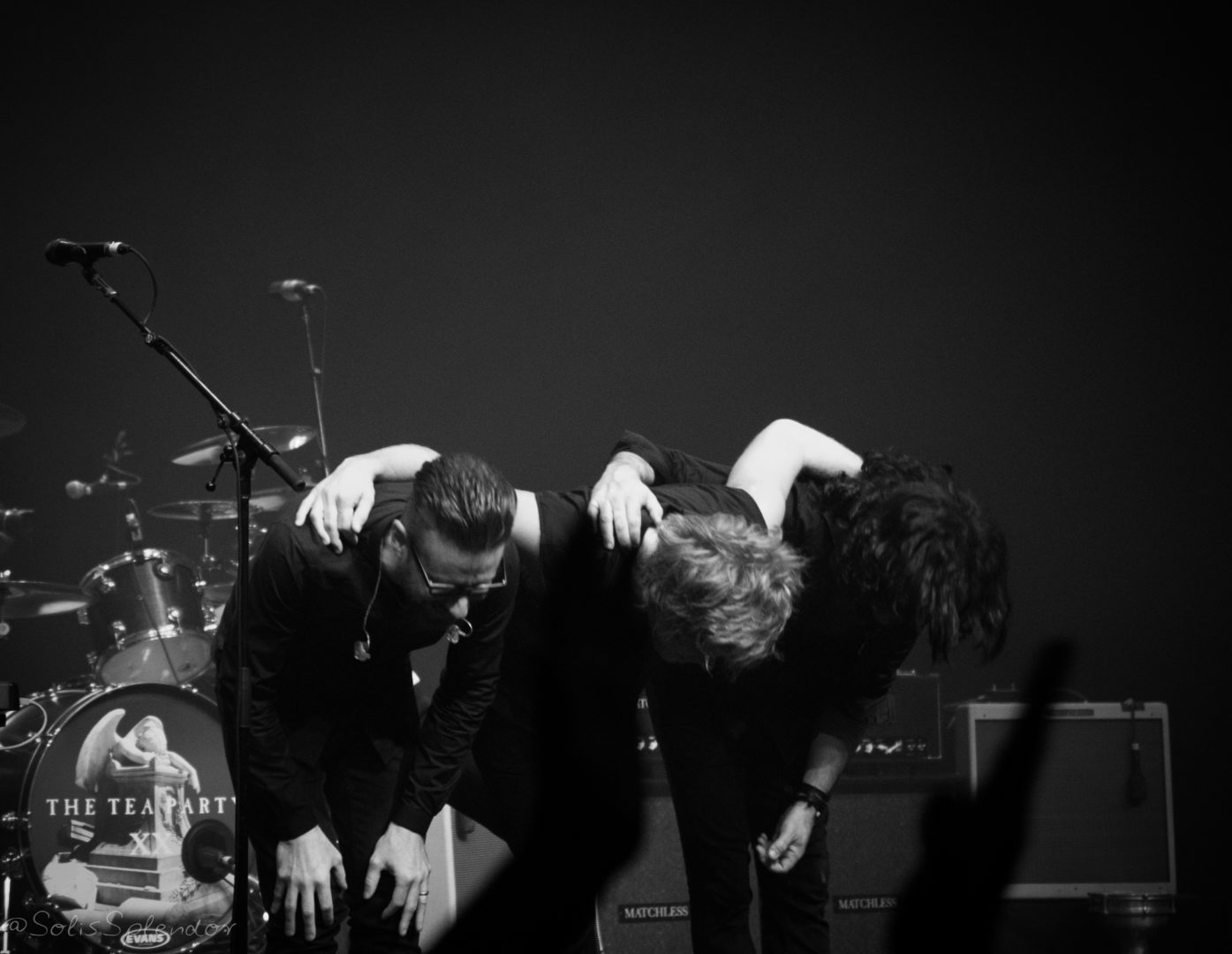 “We are spirits passing through the doors of time, with an invitation heard before we find…”

If only The Tea Party could foresee the double entendre these lyrics possessed twenty years after they were crafted.  While I walked through the large glass doors of the majestic Hamilton Place Theatre I couldn’t help but reflect on the words of their song, Shadows on the Mountainside, an ethereal work of art from The Edges of Twilight.  It is a rare gift to be able to celebrate the music of a beloved band two decades after the inception of an iconic album that propelled them into a successful music career.  The Edges of Twilight is timeless and The Tea Party could not sound any better than they do right now.  Listed below are my Top 10 Favourite Moments of the Hamilton stop in the Edges of Twilight: The Iconic Album Live Tour.

Lead singer and guitarist Jeff Martin strapped on the Gibson doubleneck electric guitar for the playing of this song.  I have heard it many times before acoustically at his solo performances.  But there was something special about hearing it with the robust, full-bodied sound of the ostentatious doubleneck on this particular night.  Pure Magic! 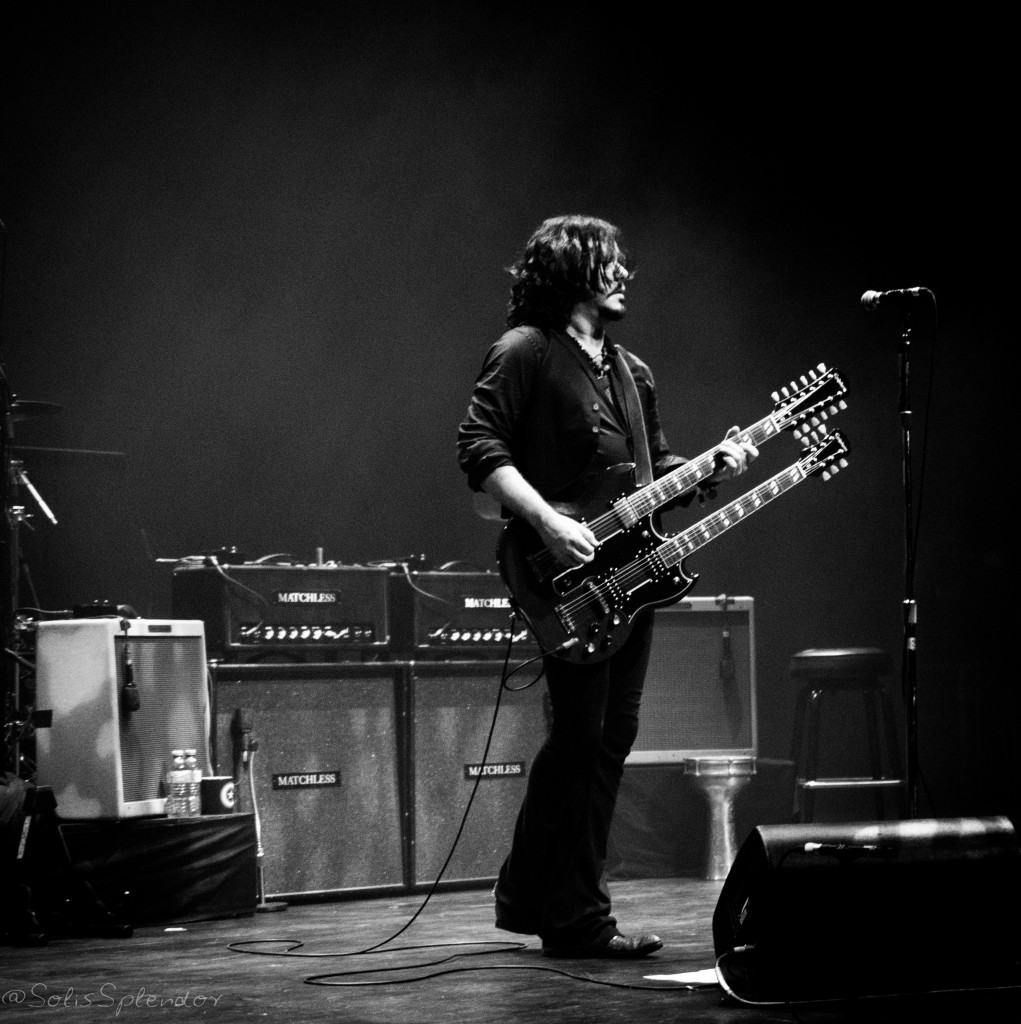 A staple in the opening of the song Save Me, at The Tea Party concerts, is the use of an instrument called the esraj (or, Indian Harp).  Martin sat alone on the stage with this bowed string instrument rested between his knees.  A sombre and dark solo was played using a portamento (or sliding pitch) style, common in Indian music.  The captivating performance quieted the excited concert-goers to a hush.  We watched, mesmerized, as Martin performed this tune, which was steeped in melancholy. 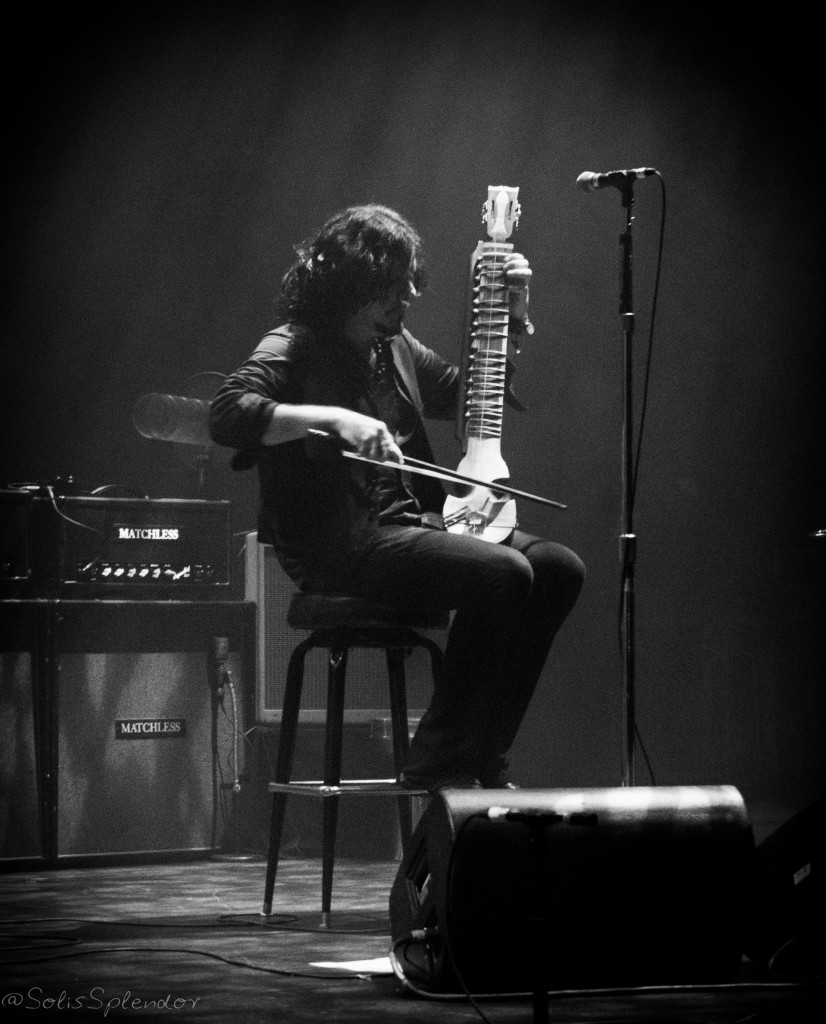 Save Me continued to delight the audience with another trademark element – a bow solo a la the stylings of Jimmy Page.  It doesn’t matter how many times I have seen this, each time is equally as entrancing.  Martin channels the musical prowess of Page by playing his electric guitar like a bowed instrument.  This fitting tribute to a dear friend of his is done in such a way so as to pay respect to the man who made this technique so famous. 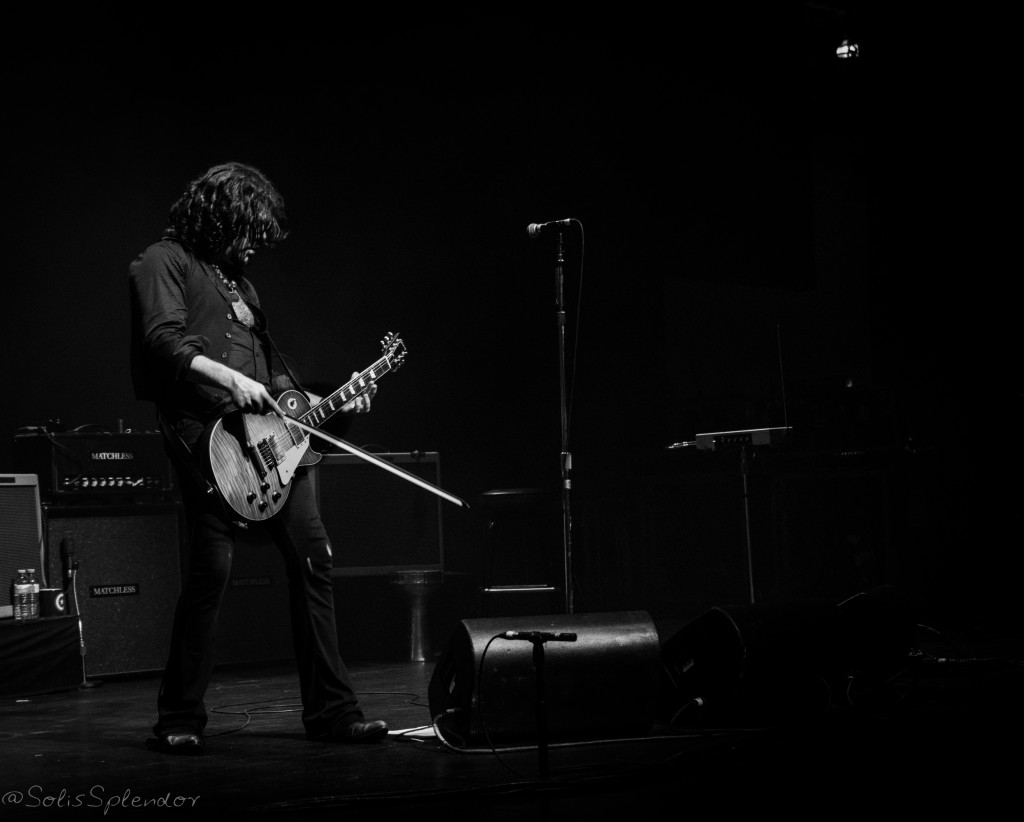 When The Tea Party performed this song during the album tour of 1995, Martin played an Indian instrument called the sarod.  On this tour he has chosen instead to play an enchanting instrument called the electric sitar.  Martin even showed off this instrument to the crowd before performing the song, exclaiming how beautiful it was.  The soft, melodic sounds of the sitar chimed delicately as he sang the lyrics to this very seductive song, influenced by a Sumerian goddess.  This moment was a rare experience for the avid fan of their shows.  I am hopeful that they will put this song into a more regular rotation for future concerts. 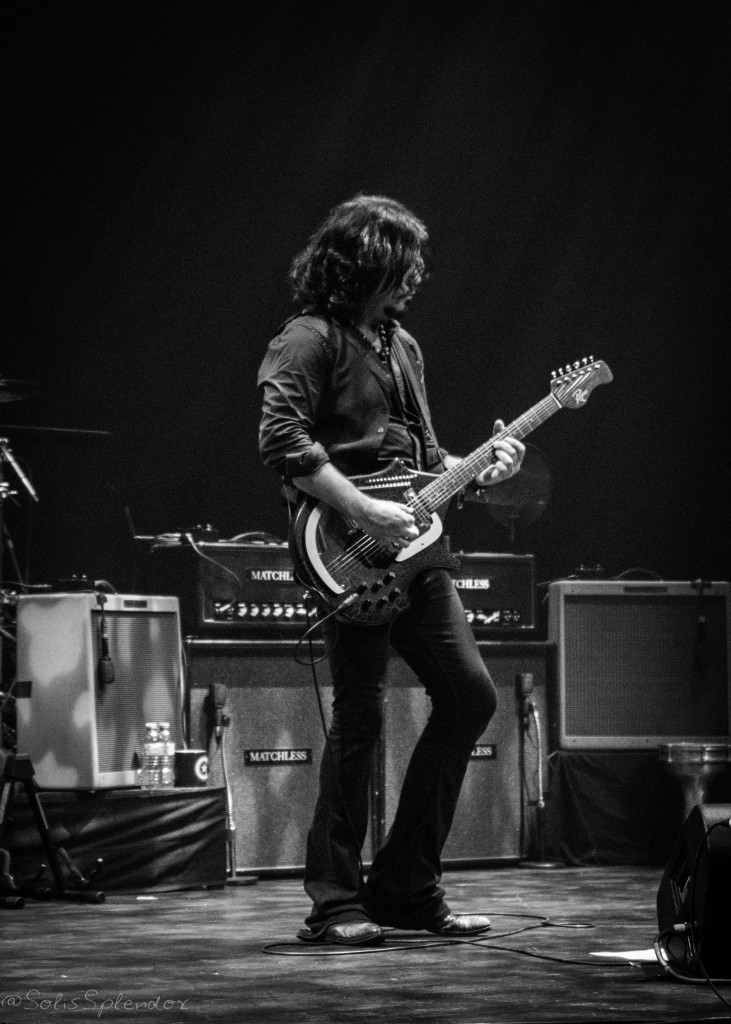 An instrument made famous in many former The Tea Party interviews is the technologically advanced Les Paul Transperformance guitar.  This guitar is capable of switching tunings mid-song for an idiosyncratic listening experience.  I was excited to finally see this instrument put into action at a concert, as I have seen it demonstrated so many times in the past.  Martin used it to change tunings during the performance of the last song of their first set (and the last song on The Edges of Twilight album), Walk With Me. 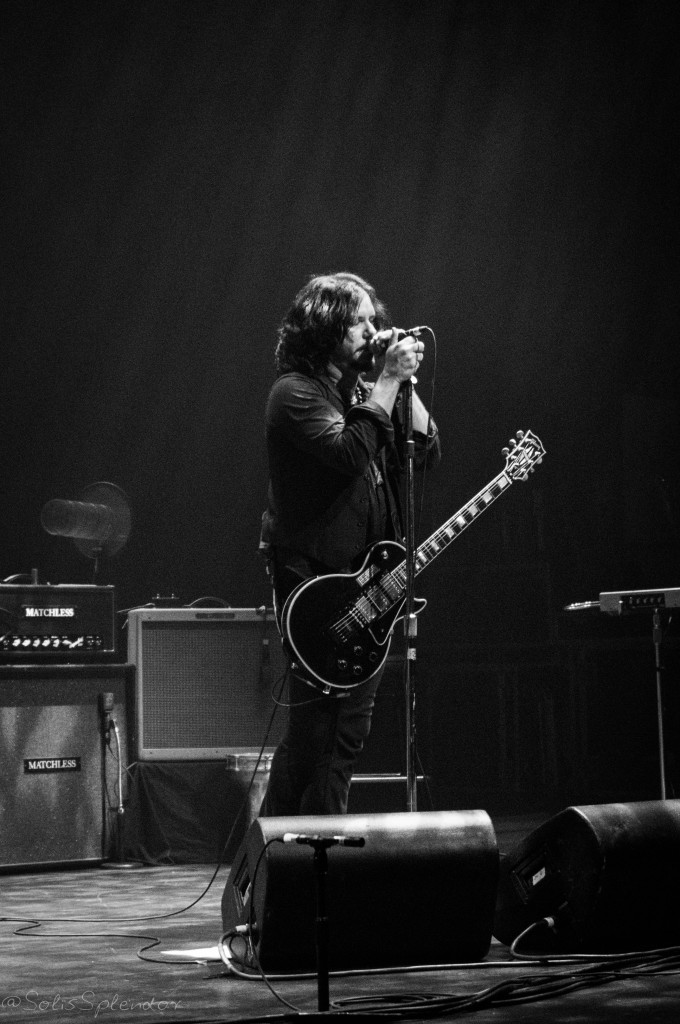 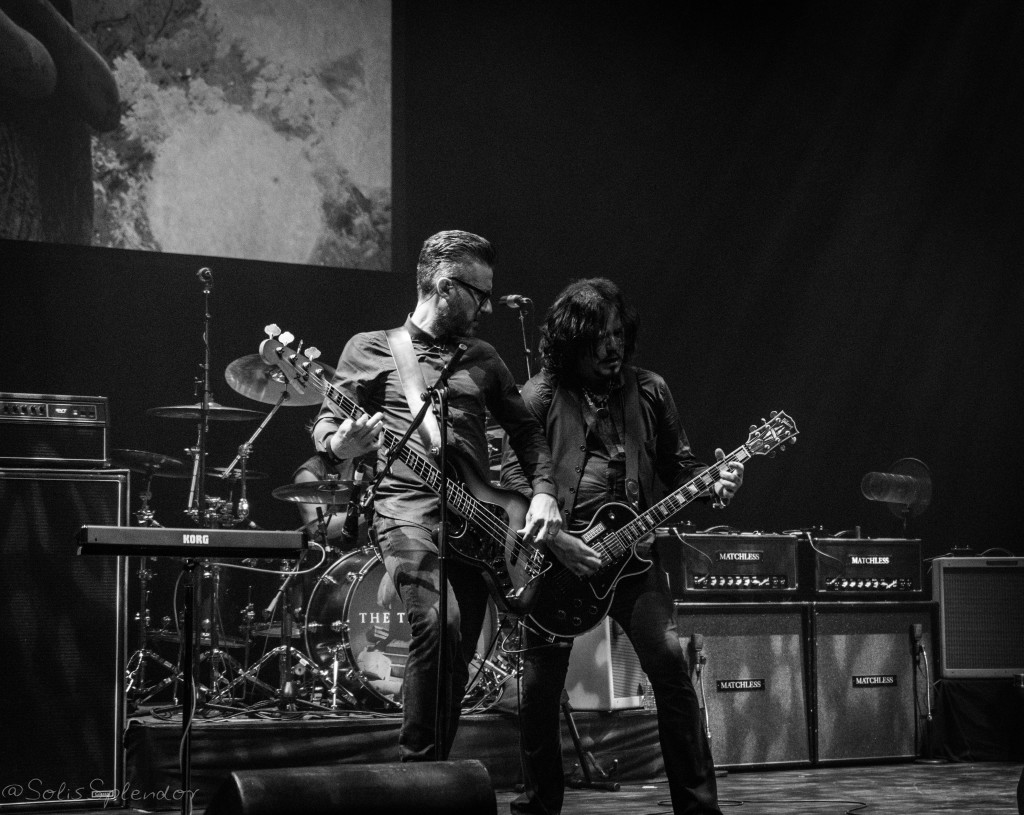 The hurdy-gurdy, an instrument that produces a low humming sound when a wheel is turned against strings, was brought back for this tour also.  It is a crowd favourite and could be seen proudly displayed in front of Jeff Burrow’s drum kit until it was used in the show.  Martin cranked out a melody on this instrument at the beginning of the quaint acoustic song, The Badger, in a fashion similar to that of the use of the esraj in Save Me. 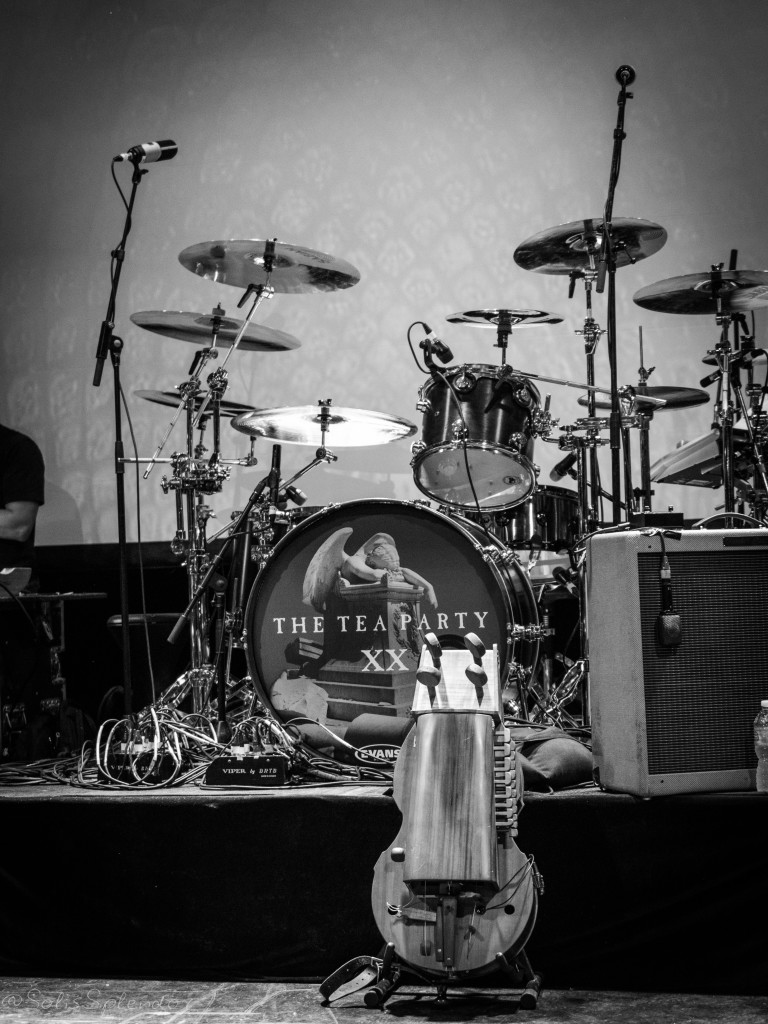 No special instruments were brought out for the playing of this song, except for the Fender Telecaster B-bender guitar that Martin only used for this song, but its performance was nothing short of spectacular.  Martin led the crowd on a heart-wrenching, palpable journey down into the depths of the inner spirit.  The guitar solos in this epic song are steeped in emotion.  Martin could be seen lost in the confines of the song, with his head tilted back and eyes closed, swaying to the melody that he crafted on his guitar. The inspiration for this song (as well as for Fire in the Head) comes from the writings of Charles Baudelaire who avowed that there is a correspondence, or correlation, between everything we perceive as separate in this life. 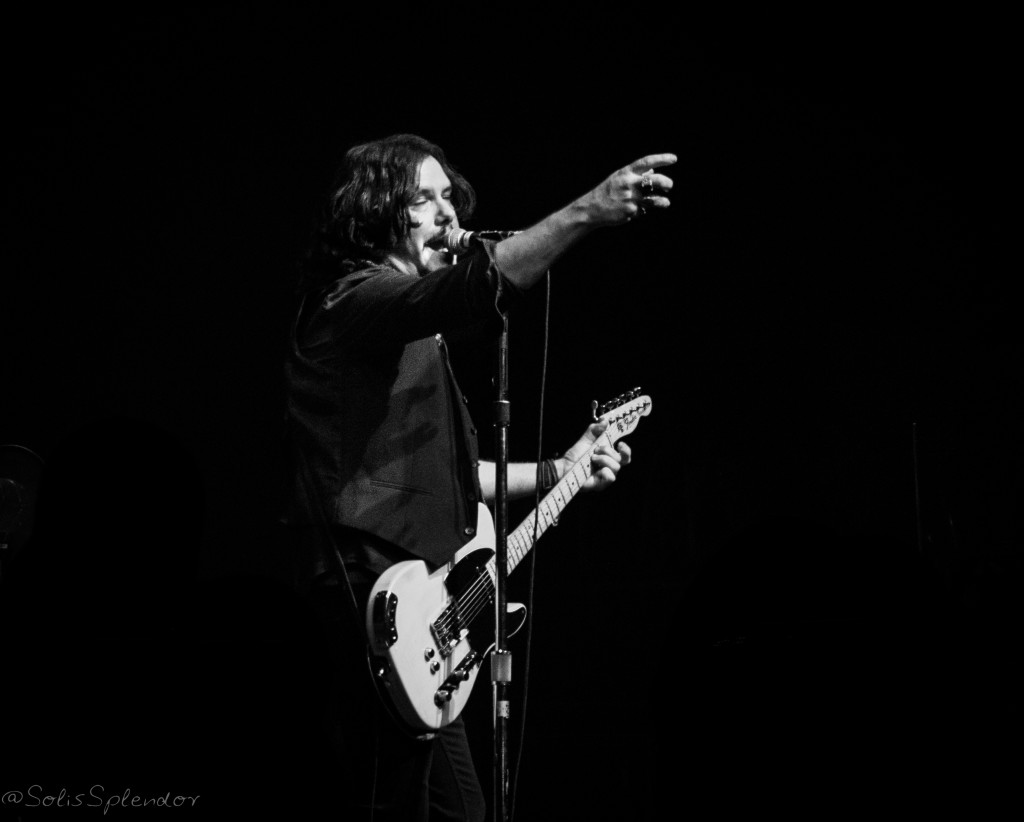 3 Shadows on the Mountainside

Stuart Chatwood, who plays bass and keys for the band, trades in his traditional instruments for a mandolin in this song.  It was originally performed with Martin on his beloved Gibson Harp Guitar but he opted for an acoustic guitar instead.  Shadows on the Mountainside has an unmistakably folky feel.  Martin attributes its creation to a long train ride through the Rocky Mountains when he and Chatwood were unintentionally under the influence of a certain “psychedelic fungus”, as he jokingly told the crowd.  The song has a rich, earthiness to it that elevates it above many other songs on the band’s roster.  It simply has not yet been matched with a similar feeling song in the twenty plus years since its inception. 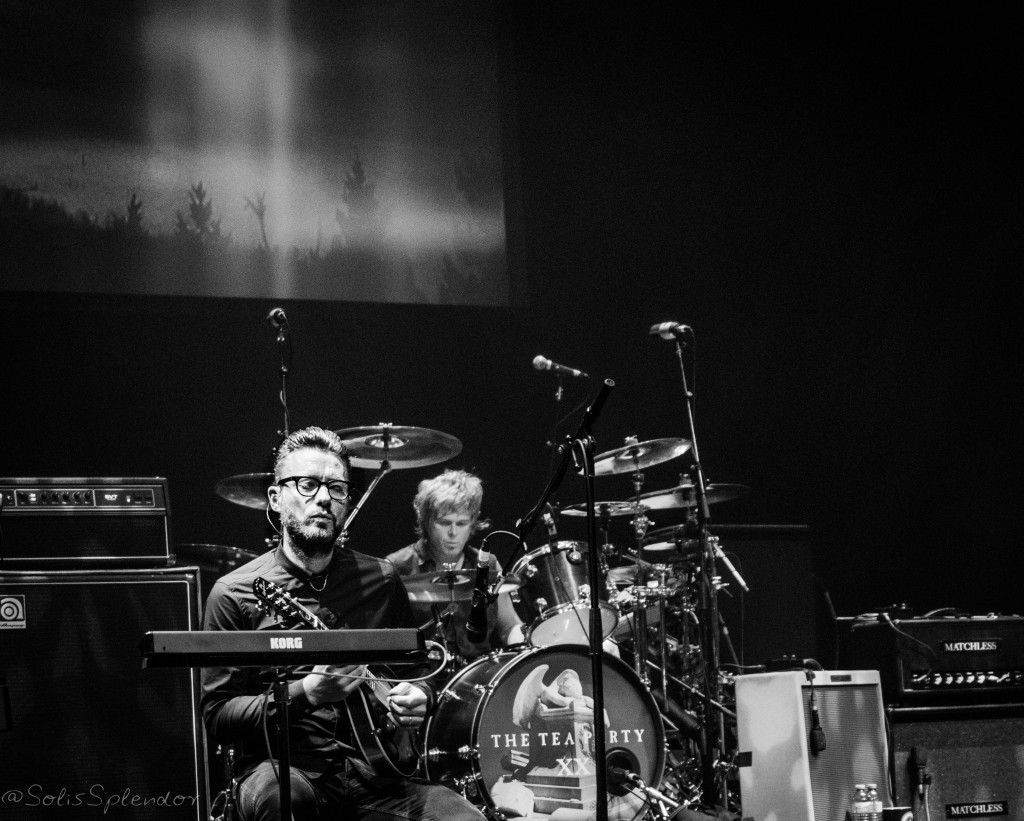 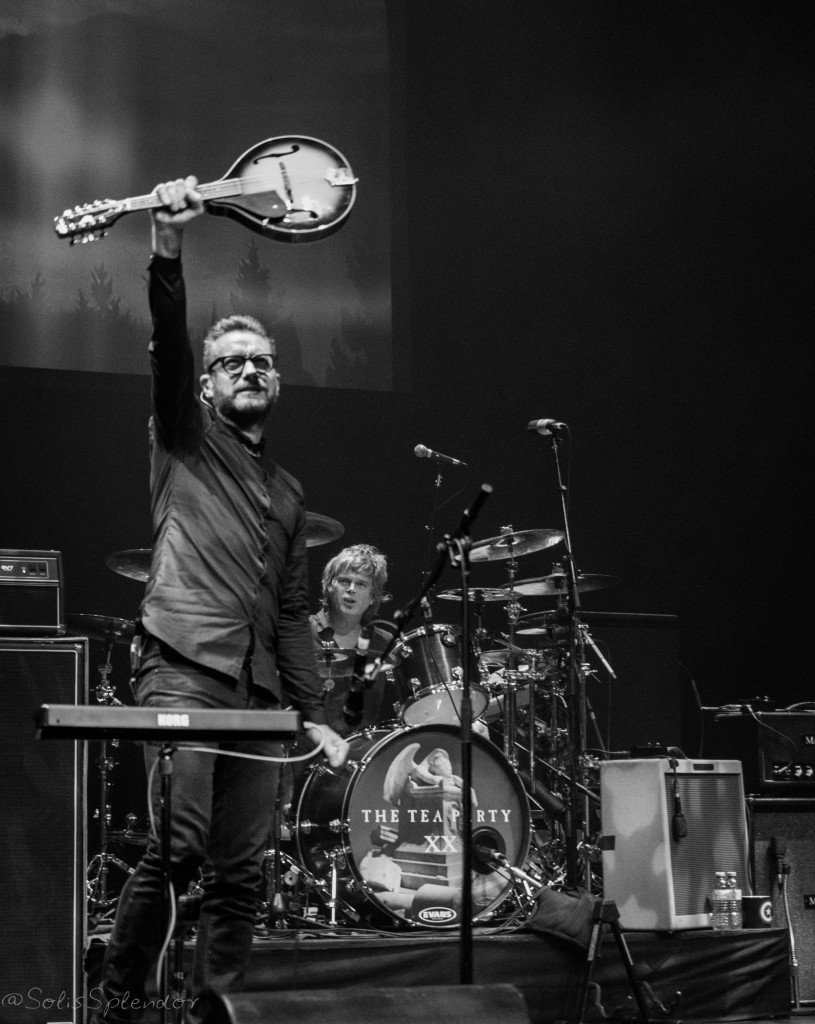 2 Turn the Lamp Down Low

There were several highlights to the performance of this song.  Martin adapted the use of the theremin, an instrument that he usually reserves for the playing of The Tea Party hit song, Lullaby.  However the unequivocal high point was being witness to the drumming trio that was Martin, Chatwood and Burrows.  A stilling drumming session was performed on goblet drums (doumbek and darbuka) by all three in unison.  Having these drums take centre stage by the entire band is certainly something I have never been witness to before at a concert.  In a word, it was magical, and stirred up a haunting emotional response for the entire crowd. 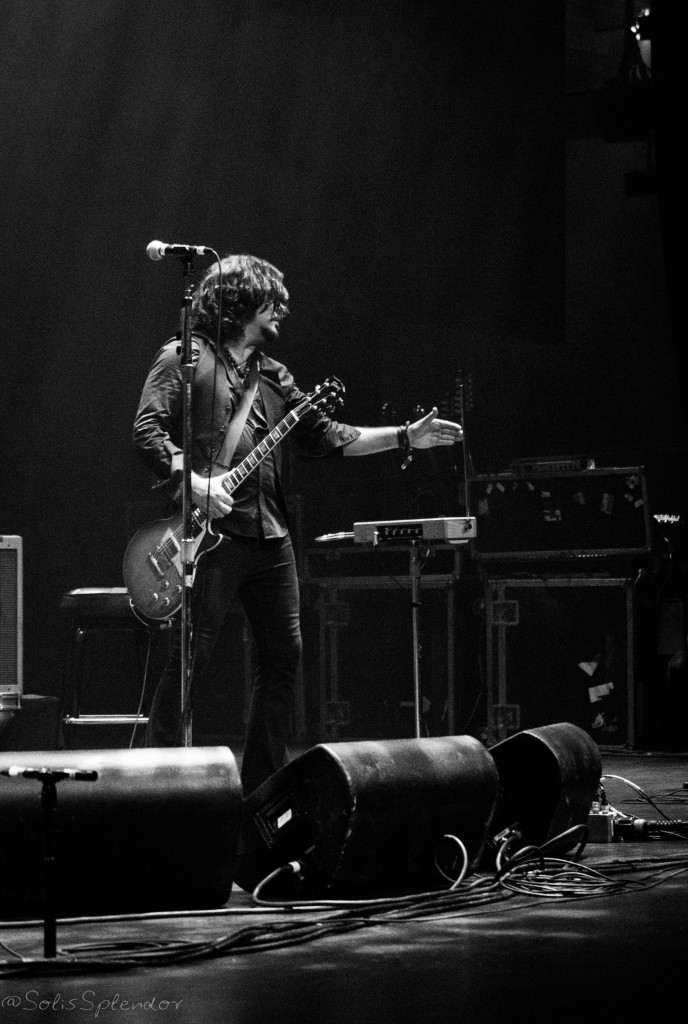 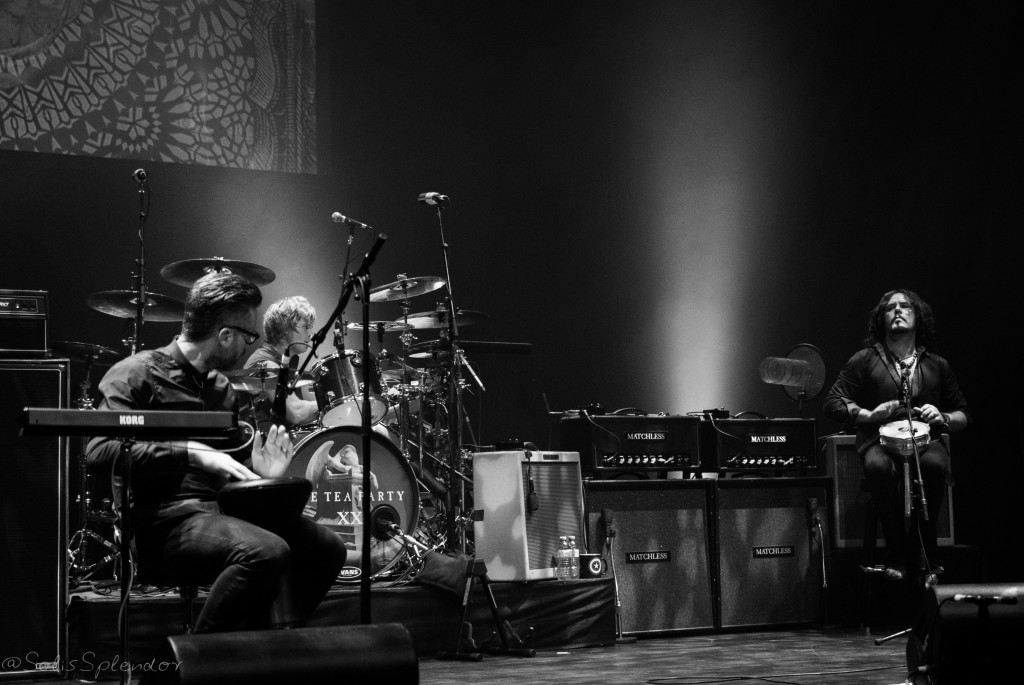 There is no denying the endearment and adoration that Martin, Chatwood and Burrows have for each other.  Despite a long separation as a band, it is fully evident that their respect for each other as musicians, and love for each other as brothers was never diminished during this breakup.  Proof of this came towards the end of the playing of Kashmir, which was inserted into the performance of Save Me.  Both Chatwood and Martin got down on their knees to play their guitars in front of Burrows.  One could easily chalk it up to showboating on stage, but it was clear to me that this was not the case.  It was a true sign of honour for the legacy that they have created together. 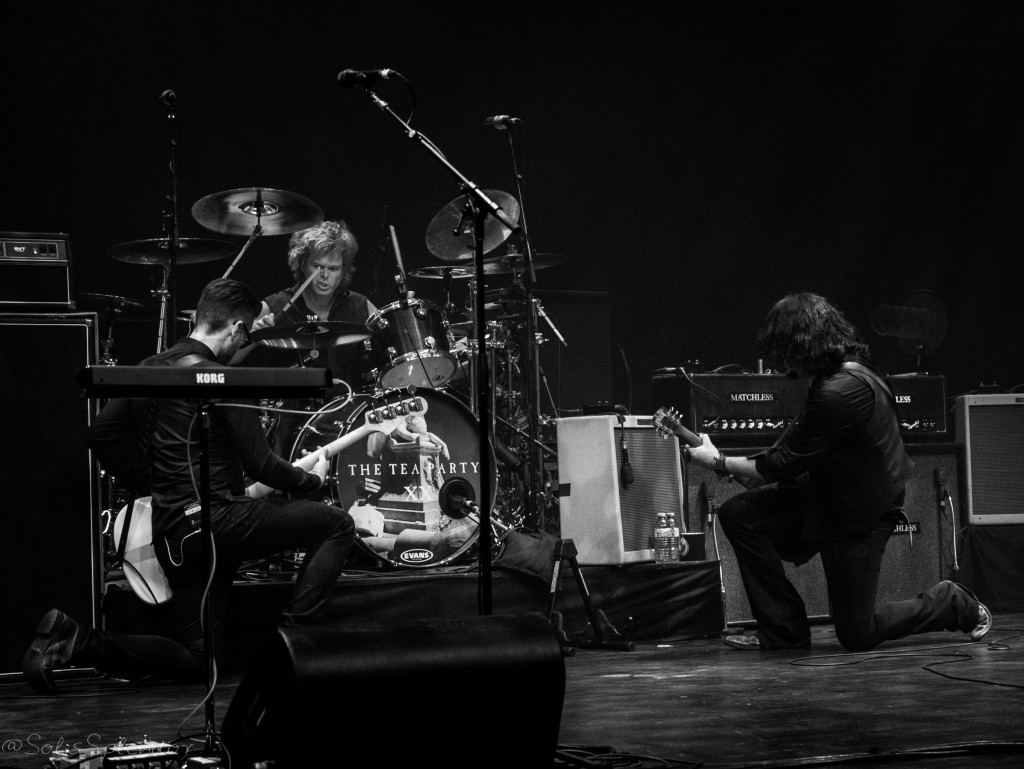 The tour has been well received by fans across the country.  There are still a few dates left to be played and there seems to be a trend of fans trying to purchase tickets to a second, third or fourth show as one performance was ‘just not enough’.  The Edges of Twilight: The Iconic Album Live tour has delivered on every promise the band made of being a night to remember.  Fans were permitted to embrace the music that propelled this band into stardom some twenty years ago.  Thank you gentlemen for allowing your fans to accompany you on this sublime musical journey.  Until next time!

See more photos from the show on our Facebook page!