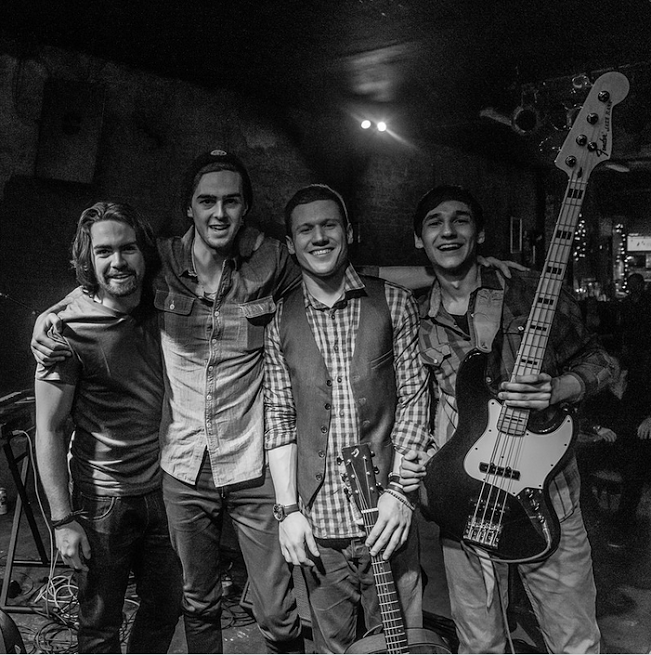 West Hammock are a band that originate from the Durham Region, I actually came across them because I noticed they often play in my hometown of Port Perry.  I thought I’d have a listen, and of course we love to support local and Canadian Musicians.  The band have recently released a couple of new live videos, so we caught up with them to get to know them a little better.

Can you tell us about how the band was named “West Hammock”?

Unfortunately, we don’t have an awesome story to go along with the name. Like many other bands, we ran into the trouble of choosing a name that was already taken. Hammock was originally what Sean and I had been aiming for, however, it was already taken so we threw the West out front and there it remained. We have thought about changing the band name in the past, but it has stuck with us this long so it feels wrong to just let it go.

You have recently released some live recording videos, will this lead to another EP or Album soon?

Although the sessions from Chalet Recording Studio will only be released digitally, we are currently in the process of working on our debut full-length album. We plan to begin recording in the spring of 2016 and we already have some studios and producers in mind. Hunter will be releasing a live EP later in the year from his band, October Wild, who did some live sessions at the Old Flame Brewery in Port Perry, ON.

How long has West Hammock been working together?

All together, we have been working as a band for close to 4 years now.

How did all of the band members meet?

Sean Thornton (vocals + keys) and I (Hunter Sheridan) have known each other since we were young kids. Our fathers used to work together as performers at Canada’s Wonderland so I know Sean through our parents being friends.
From there, we met Ryan (drums) for the first time at an Aerosmith concert and Curtis (bass) through Sean’s brother Neil.

Do you plan on playing any more concerts and shows, or touring this year?

We are planning a small tour in November around Southern Ontario and we are also looking to plan a slightly larger tour, reaching up to Quebec, during December.

We all have different aspects of music that we enjoy and we all have artists that we look up to, whether that is for technique, or songwriting. We are also very influenced by the bands that we are lucky enough to have growing out of Ontario. Some bands that we have performed with that have been inspiring to us in every aspect are Sea Perry, The Cardboard Crowns, Olivia & the Creepy Crawlies, Rory Taillon & the Old Souls, Ivory Hours, The Strumbellas, and many more.

In 2014 you released an EP together, tell me a little bit about the process of writing and recording that.

That writing process was interesting. Sean and I had a bunch of songs from playing together for a year and a half prior to Ryan joining the band. Once Ryan joined the band, the songs began to flush out more and we could really see which ones were worth keeping. After we decided we had enough songs for an EP, we went to record at Wellesley studios in Toronto and Coalition Music. The actual recording process was set back a bunch of times and it took us far longer to finish the record than any of us wanted. In the end, we learned a lot about the recording process and a lot about ourselves as songwriters, which has led to a great development in our band’s sound and dynamic. We are really looking forward to our debut full-length album.

I see the Hunter Sheridan has a side project going right now as well, can you tell us a little bit more about that?

West Hammock had been writing songs since the start of 2015 for the next record. As I (Hunter) present the majority of the new material to the band, which we then work with to turn into a song, we noticed that some of them just weren’t working with the new direction that West Hammock was approaching. With the songs that weren’t working dynamically with our new direction, I decided not to throw them away but to really flush them out instead. I got a hold of a bunch of friends and talented musicians from around Durham and we started working on the live EP, which was recording at Old Flame Brewing in Port Perry. The live EP will be released under, October Wild, and will feature 3 original songs and 1 cover song by The Strumbellas.

At Canadian Beats we like to ask a few questions to get to know you better:

What is your favorite time of year?

What instrument have you always wanted to learn to play, but haven’t?

Has being a musician changed you in any way? if so how?

Certainly. It has opened many doors and has been a huge source of motivation. Music allows me to pursue something that is creative and challenging and I have made some really great friends and had some really great experiences with it.

What advice would you give to other new musicians?

Keep working and do not give up momentum.

Is there anything else you’d like us to know about the band?

We are 4 guys who truly enjoying playing music and have a blast doing so. Ryan and I are also in school at the moment, which makes our lives even busier! Ryan goes to Durham College and I go to the University of Guelph.