Interview – Rosie and the Riveters

By Lindsay Newman on September 25, 2015@https://twitter.com/lindsaynewman_ 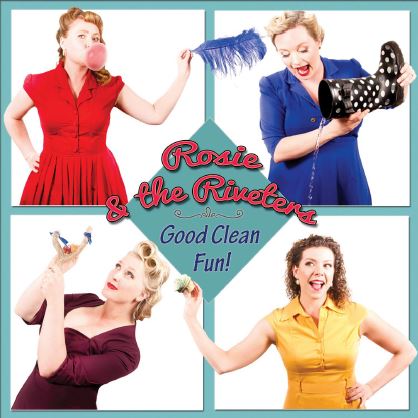 Rosie and the Riveters is a four piece folk band from Saskatoon, Saskatchewan. The band is inspired WWII feminist icon Rosie the Riveter. The band formed in 2011 and has played over 100 shows and participating in workshops with professionals such as Serena Ryder.

Who are some of your musical inspirations?

Allyson: Our band takes a lot of our inspiration from great artists such as Mahalia Jackson, the Andrews Sisters, and the Good Lovelies. I grew up listening to a lot of Connie Kaldor, Bruce Cockburn, Joni Mitchell, and Bob Seger and I personally draw a lot of inspiration from their music.

Melissa: Originally we were inspired by deep south gospel, and also 1940’s groups such as the Boswell Sisters. With our new album, we also drew inspiration from soul music such as Ray Charles. Growing up, I listened to everything from Bob Dylan, and Neil Young, to Cyndi Lauper and Kate Bush.

What is it about Rosie The Riveter you guys love?

Allyson: All four women in our band are pretty strong-willed and independent. Rosie the Riveter symbolized the women’s movement into the work force in World War II and I think we are all inspired by the strong women who came before us who
worked hard to change the status quo so that future generations of women would have more options.

Melissa: Rosie the Riveter represented women coming together to do something positive in the community. Really, that’s been our master plan since we formed the group.

What was the experience like working with Serena Ryder?

Allyson: I wasn’t in the band when Rosie & the Riveters did a festival workshop with Serena Ryder.

Melissa: It’s always a bonus when we get to share a stage with a famous person! Serena was very friendly, and welcomed us to sing back-up vocals on her songs during the workshop. I was inspired by how passionate she was about the songs she performed, even though she’s likely performed them thousands of times. Another one of my favorite moments was sharing the stage with Emmy-Lou Harris for a grand-finale at the Regina Folk Festival.

Allyson: There’s quite a large and folk music scene across Canada and the great part about the music scene here is that there is a place for everyone and it’s up to each musician or band to develop their own niche. I think we’ve worked very hard to do that and we’ve found a place for our band and will continue to develop our niche.

Melissa: I think the folk genre is huge in Canada and there’s a lot of competition. It’s great being in Rosie & the Riveters, because we have a brand that sort of jumps out from the sea of other musicians.

You guys have recently filmed a music video, what was that experience like?

Allyson: Individually with our solo projects and together as Rosie & the Riveters we’ve had a lot of filming experience, but each video is a little bit different. This was our first time filming a big music video together and it was a really fun experience. The song we chose to use is called “A Million Little Things” and it was written about looking on the bright side and appreciating all the things in our lives we are grateful for. We worked with a local company, Adjile Broadcasting & Media Production, and incorporated our friends and family in the video.

Melissa: Honestly, I’ve always been drawn to the more “real” feeling in videos, so acting things out and being fake is a big challenge for me. Sometimes I just let go and trust that the “kitsch” element will take over, and also I just have to trust the other girls in the group. Over all it was a really fun experience, we had pets and kids and all sorts of people involved, so it was big party!

Last but not least, how did you guys meet?

Allyson: I’ve known Alexis Normand since high school but only met Farideh and Melissa when I joined Rosie & the Riveters in 2013.

Melissa: I’ve known of Farideh through the music scene in Saskatchewan since we were young teenagers. I met Alexis when I joined the group in 2011, and Allyson when she joined in 2013.

At Canadian Beats, we like to ask fun questions to help get to know you better.

The summer is coming to an end, what is a favourite activity that you did all summer?

Allyson: I really enjoy camping and being on the water. When I wasn’t playing festivals with the Riveters, I was at the lake, kayaking, or on a road trip.

Melissa: One of my favorite things in the world is to go swimming in a natural body of water, so any chance I got, I went to the river or lake for a dip. The Saskatchewan River was low this year so the sand bars were absolutely gorgeous!

What is one thing someone may not know about you?

Allyson: The other members of the band love would love to tell you that I play it safe. They like to tease me about being a “slow driver” (I’m not, I just speed with caution!) and triple checking that I’ve locked my car door. However, I really love to backpack and have been to some really amazing and remote places. My favourite trip included hiking a glacier and white water rafting in the Amazon River in the jungle.

Melissa: I’m an introvert and I love being alone in nature.

What is a tradition that you have for Thanksgiving?

Allyson: I usually spend Thanksgiving with my immediate family.

Melissa: My mom and I usually cook a fusion of exotic international foods and invite as many family and friends as possible.

What is your favourite song by a Canadian artist, at the moment?

Allyson: Do I have to pick just one? Two of my favourite Canadian tunes are “Lovers in a Dangerous Time” by Bruce Cockburn and “Back to Me” by Kathleen Edwards.

Melissa: Any song by Feist.

What is your favourite TV show at the moment?

Allyson: I don’t have a lot of free time so I don’t often get wrapped up in a series, but I’m a fan of documentaries.

Melissa: Star Trek: The Next Generation.

Lastly is there anything you would like to say to your fans?

Allyson: I think we’d like our fans to know how grateful we are for their support. We are so lucky to be able to do what we do and we wouldn’t be
where we are today without people believing in our music and our message. Writing and performing music that people connect to is a great feeling and we hope that our new album brings people happiness.

Melissa: What Allyson said is so very true. Your support is really what keeps us going. Being a musician can be challenging. Being away from our families and not having a reliable source of income can be tough, but seeing how our music inspires or touches people really is what makes it all worth while.