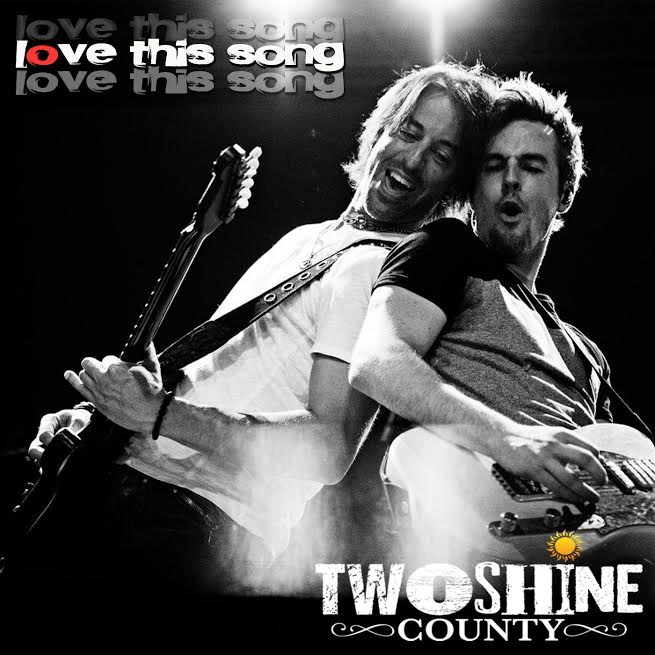 TwoShine County is Canada’s newest country duo composed of the musical collaboration of Daron Schofield and Dennis Hann. The duo formed in 2014 and have been charming audiences with hoedown-worthy performances ever since. Taking the stage at Canadian Country Music Week in Halifax this year, and with a new single “Love This Song” released and serviced to radio this month, we will be sure to see great things come from TwoShine County.

How did you come up with the name “Two Shine County”?

Dennis: This was definitely the hardest thing we’ve had to do, to date. It literally took us two or three months to decide on something. The “Two” is probably a little obvious seeing as that we are a duo. That was the easy part.  The Shine comes from the belief that our sound shines some light on what country music is about, which is real-life storytelling. ‘Shine’ also represents the positivity we want to get across in our music.

Daron: And although the ‘County’ at the end seems like a logical nod to country’s rural traditions, there’s a deeper meaning as well. As soon as we started sharing our music with some of our friends in the industry, the response was overwhelmingly supportive. We just felt so much support, like we were part of a special community or family, and “county” seemed the proper way to express that.

Is all of your songwriting a joint collaboration?

Dennis: We have definitely found a very cohesive and easy process for writing. We don’t really have a formula but it just seems to come together. One of us will bring a guitar riff to the table or lyrics… or even just an idea or a hook. Then we just get started.

Daron: We’ve also collaborated with some other great writers as well, which brings in another perspective. You can usually tell right away when you’ve got something special happening. Songwriting is such a special gift.

You have opened for some prominent Canadian country figures. If it is possible to answer, which has been your favourite to open for?

Dennis: Looking back on all the artists we have played with and opened for, it’s a hard thing to pick! So many great memories on stage, and even more memories getting to hang out with, and meet these amazing country singers/artists. We warmed up the stage for Tim Hicks in Nashville once, and we seriously love that guy, so that might take the cake for me.

Daron: That’s a really tough question; so many factors come in to play on any given night. The biggest thrill for me is connecting with the audience. To see how powerful music is and the way it can bring people together, it’s almost like a spiritual moment. But I would have to say one of my favorite artists that we played with is Tim Hicks. He is the real deal, an amazing talent but even more an amazing human being.

You recently released your new single “Love This Song”. What was the inspiration behind this song?

Dennis: When choosing the next single to release, we ended up writing a ton of songs and also listened to songs from other writers and publishers. We really wanted to move forward with something that we really connected with and believed in.

Daron: When “Love This Song” was presented to us, we immediately fell in love with it and began playing with different ideas of how to make it fit with our TwoShine sound. It’s definitely a feel good song with an infectious groove that gets you moving and hopefully singing along.

You both came from musically oriented families. Did you both always know you would pursue a career in music?

Dennis: I always feel like passionate musicians are lucky. Because when we discover it, even at an early age, we know this is it, and this is who you are. I was born and raised around music, especially country music, so that definitely helped put me on that path, but it wasn’t until I turned 12 and got my first electric guitar. That was it for me.

Daron: Absolutely!!! I can’t remember when or if I actually made the decision to choose music as a career. It’s just what I did. I was singing before I even understood the words that were coming out of my mouth. There were all kinds of instruments around our household, so it just seemed natural to pick things up and see what kind of sounds they made.

What is your favourite Canadian venue to play?

Dennis and Daron: It’s hard to pick a favorite venue. For us it’s more about the people. There are some amazing venues and promoters out there and we’re grateful for all the opportunities we’ve had. The Cowboys Tent at the Calgary Stampede was probably the most fun that we’ve had on stage. It was 10 days of gigs and every single crowd was amazing. So much fun.

How many instruments can you both play?

Dennis: I’ve never really counted, but I would say in 6-8 range. I stick mostly to guitar, that’s my core when it comes to music, but I love to pick any kind of instrument up, and make it say something!

Daron: I think it’s up around 7 or 8. I always like trying new things. You never know what sounds you’re going to be able to make when you pick something foreign up. Anything with strings is usually a no brainer. Some of my favs on the list would be: guitar, bass, mandolin, banjo/ganjo, piano a little bit of drum…but I even break out the trombone every once in a while.  Haha!

You recently performed in Halifax for Canadian Country Music Week, what was the highlight of your trip?

Dennis: We played some pretty awesome showcases and had a crazy busy CCMA schedule, but for me the highlight of the trip is always the parties that take place every night, where all of your friends and peers in the music industry go to have fun and catch up. Absolutely loved seeing everyone, and making so many fantastic new connections.

Daron: Obviously when you get a chance to hangout with your country peers in one place for 4 or 5 days…it can turn into a pretty amazing party but, what an amazing celebration of Canadian country music. Performing in the Songwriters Circles was a huge thrill and an honor. The actual award show was probably my favorite though because it was all about the listeners, the fans. Seeing them cheer on and enjoy a great night of live country music…that’s what it’s all about.

What has been the most inspiring milestone in your career thus far?

Dennis: The most inspiring milestone in my music career was about a year ago, when Daron and I finally decided to go full time on TwoShine. No part time job, no side gigs, just all TwoShine all day. Finally being able to make this happen, and have every day to use towards creating music, is truly a blessing, and inspiring as hell!

Daron: Honestly, being able to do music as a career is incredibly inspiring itself. Hearing your songs on the radio, playing them live for people, it just doesn’t get any better than that. But when you actually see how something you have created affects people in a positive way or inspires them to feel something…there is no other feeling like that.

When can we expect your new EP?

Dennis and Daron: With the release of our third single “Love This Song”, we will be following it up shortly with a collection of our two other singles and some other songs that we have recorded recently. We can’t wait to share the EP with everyone. I believe we’re working towards a November release date.

If you weren’t musicians, what would you be doing?

Dennis: If I wasn’t doing music, I probably would have followed a more academic route like my older sister. I’ve always had an interest in psychology and research to do with the mind. My sister is a doctor, so it would fit!

Daron: I’m a huge cat person so I had the idea of opening up a cat spa. Complete with massages and everything. Haha! My cat loves his kitty massages. But in connection with that I was pretty close to going into massage therapy. Playing guitar makes the hands and fingers strong.

What was your favourite Halogonian site you visited during Canadian Country Music Week?

Daron: Sadly we didn’t get around to doing any sight seeing but I’m originally a COAST boy from Vancouver, BC so we definitely spent some time getting close to the ocean. It was pretty amazing walking around and experiencing the amazing architecture though. There are so many beautiful old buildings and cool little pubs. Haha!

In your opinion, what is the greatest ever country song?

Dennis: Greatest country song ever? I always thought “Sunday Morning Coming Down” written by Kris Kristofferson, and performed by Johnny Cash was so perfect. When I think of true blue country, and of the legends out there who just did it so beautifully, I often think of Kris, Johnny, and Merle of course.

Daron: One of my all time favs is “Raining on a Sunday” by Keith Urban, but “The House That Built Me” by Miranda Lambert is probably the most perfectly written song. What a beautiful story telling, such an emotional song.

If you could perform with any female country musician, who would it be?

Dennis: I absolutely love the electricity and power that Carrie Underwood brings to the stage with her incredible vocal presence. Performing alongside someone with a voice like that, it would really raise the hair on my arms! Just electric. Absolutely electric.

Daron: We just saw Shania last night so she’s fresh in my mind. She’s such a great performer. I have always loved Carolyn Dawn Johnson’s voice though. What an amazing talent.