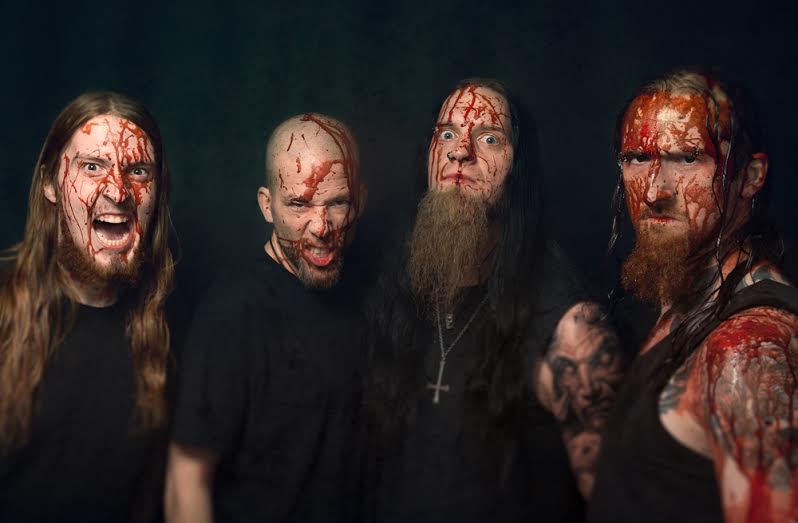 Edmonton horror’s, BLEED, are on the edge of releasing their full-length album on September 29th. This particular breed of insanity will be titled “The Hatred Inside” and if the single they just released is any indicator, the skies are about to run red. I had the chance to ask Robert Kreed a few questions.

Bleed!!!!! How are you guys? Getting stoked for months end?

Hey!!!! Yes we are! Everyone has been really awesome with their support and their anticipation for our first full length.

Are you doing anything special to get ready for you debut release?

We’re currently improving our online presence with upgrades to our social media sites and putting together our online store. This aspect is a little new to us so it is taking up some time! I’m still trying to get my head around it haha! Who put me in charge?!

How did the band get formed? Who are the members?

The original line up formed through Kijiji ads in Edmonton. Our current drummer is someone we knew who expressed interest once the position was available. The band itself has been getting things bloody for over 3 years now. We have myself, Robert Kreed, on vocals, Mike Bell on Bass, Ron Kratky on guitar and Chuck Murphy on drums.

What inspired the name BLEED?

We wanted a name that was like a punch. Pow! Something that summed up what it is that we do and what we sound like. Took us a while but we finally came up with BLEED. Menacing. Painful. Add umlauts above the first E, and you get us!

How does you name represent your music?

Considering we are covered in blood, the name is an obvious give away. But aside from that, BLEED also describes our sacrifice and efforts put into this band. Struggles, hardships, but more importantly, our victories.

We have a usual writing process. Start with a guitar riff and build upon that. Jam it out a few times and see where we want to change things up. My lyrics tend to start out pretty chaotic until I am able to focus in on a story, emotion, or direction. After I get a feel for the song I then hone in on what it is I am singing about.

Is there a common theme for the duration of the album, or is each song about a different topic or idea?

There is a theme for this album. It is a literal look inside a vile being as it delves into the darkest vaults within. Everything horrific and evil brought to light for examination. An autopsy of the body and of the mind. The album start with the dissection of the subject which them slams into the songs of the album with the outro resulting in the subjects death. Playing the album on repeat, the process starts again.

When you are making a song do you write with an audience in mind?

We always have an audience in mind for our writing. We consider their reaction, our actions on stage, how things can look, what can we do for the song if we wish to have more theatrics to it. Most importantly pay attention to having quality songs that can stand on their own without any of the stage show. Once we are confidant that we have achieved a worthy song, we then add to the stage show side of it if we feel it is necessary.

How did you decide which song would be your single?

We’ve been playing these songs live for a while and have taken notice which songs people are able to identify as one of our songs. Something that had a noticeable catchy hook or that stood out a little more than our other songs. With the three songs we did release, we felt they gave the best well rounded introduction to our album.

Where did you record your new album?

We recorded the album at Two Bodies of Water Studios and Excalibur Studios, both in Edmonton. They were produced by Tyson Travnik and mixed by Scott Fox of Ivardensphere.

Tell me what was it like to play the Wacken 2015 Metal Battle here in Canada, and what was your reaction to being finalists?

We fought hard to make it every step of the way and improve in every way we could. Just the way everything happened was pretty funny! We weren’t able to jam for a month prior due to our guitarist being in Thailand. We actually picked him up to go to Toronto fours after he just got back from holidays. Our drummer was on tour with his other band, Idolatry. Once it was determined that we were heading to Toronto we looked at ourselves and asked, “How are we gonna pull this off?” that’s when we decided we’re going to hit the stage and do what we do. Period. We didn’t win but being top 6 in 120+ competing bands…we were happy with our accomplishments.

Will you be touring to support your debut album, if so where?

We just finished a pretty successful tour through BC for our first time around, DJ Temple from the band Without Mercy helped secure dates to put the tour together. Met a lot of very awesome people. Now we are changing gears to launch our album, The Hatred Inside. We hit up Vernon, Vancouver, Burns Lake, Grand Prairie, Lethbridge, Calgary, and a final stop in our hometown of Edmonton.

I hear that you live shows are wild can you please explain?

Our live shows are taking life of their own. Always growing and introducing new performances. We first started with myself covered in blood, a demonic skeleton mic stand with built in strobe light and smoke machine, I would also do costume changes throughout the set accompanied by hand held props. We have since now added multiple blood props being poured on the audience, scenic stage props such as a stitched flesh banner, skulls and limbs, blood spray from the mic stand, a few more costume changes, and the introduction of other characters on stage for special events.

Is any of the blood real? Animal or Otherwise…?

All the blood is my own recipe made from food based products. Corn starch being the main ingredient. It is not sticky like corn syrup and I add Maple flavouring because, well, we are Canadian and it smells awesome! I make a thicker blood to be used by the band on stage while blood smothered on the crowd is watered down. This results in an easier clean up (if any) for the venue and works better for the props I use. Prevents them getting clogged up and malfunctioning during a show.

Without spoiling anything what can people expect from a BLEED show?

What’s next for BLEED?

We are writing new material, working out new stage ideas, and getting ready for our Santa BLEED show which we hold every year. This is the show where we like to showcase new songs and a new stage show. In the new year we plan on hitting more festivals, playing more out of town shows, and expanding our fan base. We hope this will help our future tours.

What is your opinion on the metal scene in Canada?

The metal scene in Canada is surprising. A show you think should be well attended, no one comes out. A show you think will probably be a poor turn out, may or not be, but those who are there are so passionate they revitalize my drive to do what I do. I am proud to have what we have and I know everyone will continue to improve it.

Thank you to everyone who has supported us and the metal scene, you guys are the reason we are here! Let us know what you think of the album! Santa BLEED 4 is at DV8 in Edmonton, December 19, we hope to see you there!