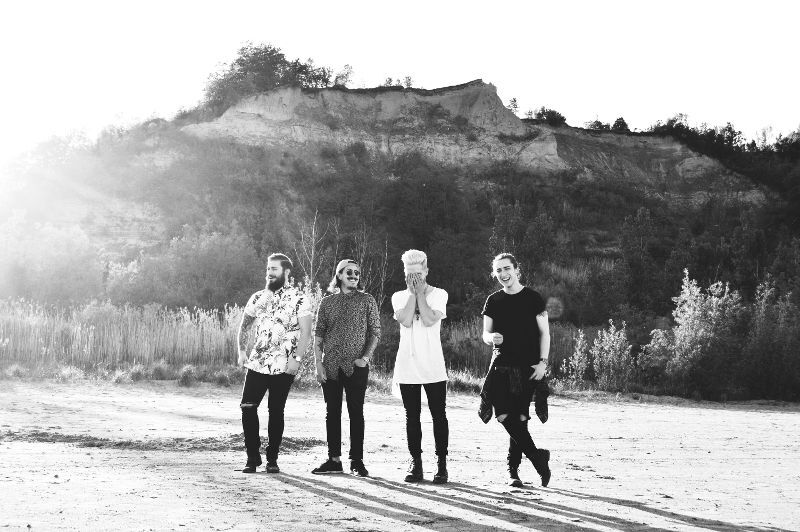 Curses are relatively new on the scene, but Martin Broda was part of the band Abandon All Ships before he began this venture.  They began in 2015 and are set to release their first EP “The Bridge” come October 16th, 2015.  Members are Martin Broda, Michael Farina, Daniel Ennis, and Michael Ferreira.  They plan to follow-up the EP with a month long tour with Jesse Lawson. The band will be playing KOI Fest which will kick of their North American tour, for more info: https://www.facebook.com/wehavecurses

How did the band “Curses” come to be?

We decided on Curses because we all came from places where maybe we felt a bit disillusioned from the music scene and the music industry, and when we started writing these songs together we couldn’t help but to be in love with music, and playing, and the creation process. So we felt “cursed” to play music forever.

How would you describe your music?

Indie, pop, rock. I hate deciding on what we are. We went into this without any preconceived paramaters on what we were supposed to sound like. So far, we sound pretty pop rock, but who knows, maybe well write an R&B record someday. We want to avoid limitations.

I saw that you recorded a music video over the summer, when should we expect to see it?

It looks like you are ramping up to start your first tour together, how many shows have you played as a band so far?

Not very many, we’ve done maybe four shows thus far. One being an acoustic. We’ll be playing one more prior to tour for The KOI Music Festival in Kitchener, ON.

How do you feel about going on tour with Jesse Lawson?

We’re pretty excited actually, he’s come from a band that we’re all fans, and his new material is great. He’s an incredibly talented musician. We’re hoping to learn a thing or two from him.

What is in store for the band in the next year?

How did the writing process work for your EP?

Basically, we all demoed these songs onto a computer, Martin, or Dan would come up with a riff or chord progression and then we’d expand upon that. The hard part was playing it as a band the first time and fine tuning what really worked live, The difference between demoing ideas straight to a computer and playing them as a collective was far greater than we had anticipated. It could very well have been the bottles of Scotch we drank during the demoing process.

At what ages did you start playing your instruments?

Martin Broda – I started singing as young as I can remember, but didn’t really know I could until I was about 12. I also found my passion for music at the same age.

Michael D. Ferreira-I started playing bass when I was 14

At Canadian Beats we like to ask some questions to help the fans get to know you better:

Do you have a favorite song right now?

Michael Farina – Honestly, What Do You Mean by Justin Beiber is pretty great, or anything off The Weeknds newest record. Canadian musicians are really, really on top of thier game right now, eh?

Michael Ferriera – Doomed by Bring Me The Horizon

How do you feel before a show is about to begin?

Martin Broda – I’ve lost my nerves before a show a little while ago and I think that with all the shows I’ve played, my fear and nerves have slowly transitioned into anxiousness and excitement. It’s a feeling I know every artist loves and thrives off of, at least I do.

Who is someone you’d love to open for?

Michael Farina – That’s probably an endless list for me but… Paramore maybe?

What is your favorite food of all time?

Martin Broda – Any kind of seafood

Daniel Ennis – All things italian are generally my favourite

Tell us something else you think your fans should know about you.

Martin Broda – I don’t kill bugs inside my house, I catch them and set them free outside.

Daniel Ennis – I still kill it at work at 7 in the morning after staying out till the wee hours of the night/morning and only getting 1/3 hours of sleep. It’s tough sometimes though not going to lie.

Michael Ferriera – My OCD has more control on my life then I do/deep down I’m an old man.