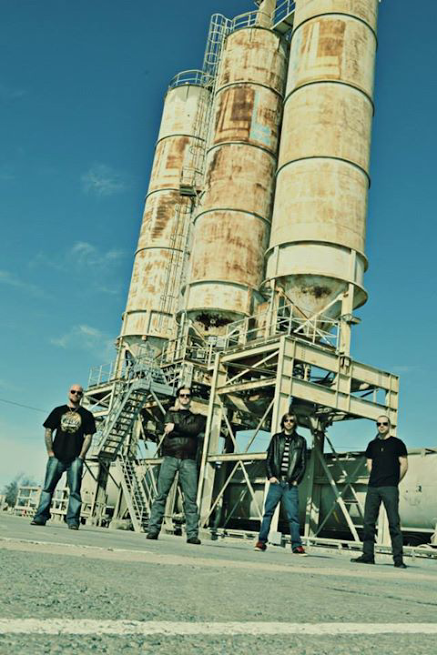 Halifax, NS based progressive rock band, Shadow of Everest is made up of Johnny V (Guitar/ Vocals), Shaun Cowell (Bass), Serge Arsenault (Drums) and Corey MacNeil (Guitar). The band is currently putting the finishing touches on their first EP and has released a single called “The Victim” back in August.

I caught up with the band and asked them a series of questions, and now it’s your turn to find out what they had to say!

JV: Shaun and I knew each other from our previous band, Little King Hunter. Shaun is a killer bassist and an incredible musician so asking him to play bass in a new project was a no-brainer. We put out an online call for drummers and another guitarist and met Serge, our drummer, a short time later. We auditioned him and threw all kinds of stuff at him but he played through all of it. He’s a really versatile, hard working drummer. Deathray (yea, that’s his full legal name) joined up a few months after that. He’s a real surgeon; his approach to music is really well calculated.

Where did the name Shadow of Everest come about?

JV: Since all the good band names are already taken I just wanted something that was going to match our music. We went through a couple of names first; we almost called ourselves “The Alternative” but we didn’t really want to associate with a genre that we didn’t play. When “Shadow of Everest” was brought to the table we liked it because it’s dark.

You have just released a new single, “The Victim”, what can you tell us about the writing process on this song?

JV: My writing process is vague, really. I’m always after the next juicy rhythm. The music for The Victim fell into place pretty much exactly how the song itself progresses. I came up with the intro and the “main theme” riff, and after jamming on things a couple of times we created the middle section to release all the tension that the music and lyrics build up. Lyrically, there was a lot of room in this song for almost anything. I just landed on the topic of liars and manipulators.

Will there be a video for the single?

JV: There is a video on our Youtube channel! It’s a lyric video with some cool artistic scenes due to the pauses between vocal lines. It’s pretty cool.

When can we expect the EP to be released?

JV: We’re in the process of mixing everything now and we don’t want to rush it. We want to have it out sooner than later and if I had to guess I’d say we’ll have the whole thing out in either October or November of this year.

What can you tell us about the recording process of the EP?

JV: Not much to be honest! Our process was drums and bass first to lay down bed tracks, guitars came second and vocal tracks and solos were last. We’re pretty well rehearsed so we walked into Echo Chamber and 20 hours later we had everything we needed to start mixing. We only found a couple of parts that needed to be re-recorded but that was more of an artistic choice than an issue of quality or performance.

Do you have any shows in the coming months that you’d like to tell us about?

JV: We don’t have anything booked right now. We just finished a small maritime tour in August and we wanted a couple of weeks to put together some new ideas. I suspect we’ll have some local shows again by October.

If anyone has yet to see a live Shadow of Everest show, what should they expect?

JV: We have a lot of energy when we play live and we put a lot of emphasis on our live sound. We’re authentic to our recordings and we do very little in the studio that we can’t recreate.

Halifax has many amazing bands/ artists, which would you recommend if someone asked?

Shaun: Drinking on the deck

If you were told you could only listen to one album for the rest of your life, which would you choose?

Thank you for the support and for coming out to see us. We hope to see you all and meet new fans on the road or in Halifax!