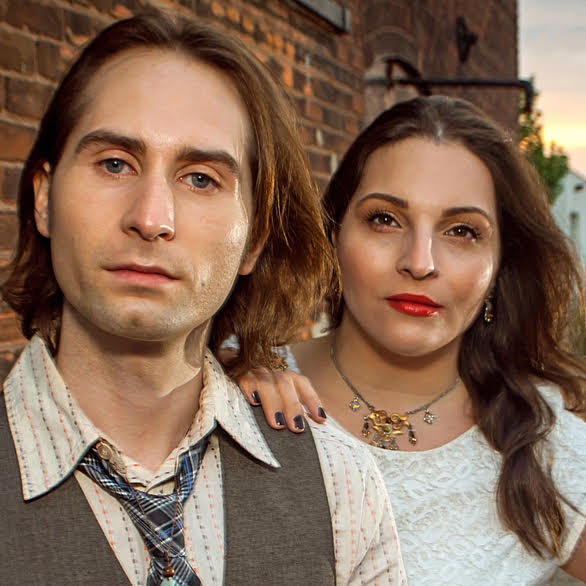 Hamilton, ON based husband and wife duo, Azalea is made up of Benjamin and Mia Hackett. The duo has released three albums together and will be releasing a brand new album this fall. I had the chance to ask the two a series of questions about their background, their new music and more!

How long have you been performing together?

That’s a great question. We get asked this a lot and we always look at each other in bewilderment wondering, “how long has it been?”. Seriously though, we’ve done the math and it’s a little over 11 years.

You originally performed as “Benjamin & Mia”. Why did you change to “Azalea”?

We changed our name to “Azalea” for our second release – “Coffee & Kisses EP”. We released this album right at the time we were getting married. In fact, we used our wedding as the release date for the album and gave our guests the album as our wedding favour. It was a transitional time for us and a real opportunity to discover who we truly were as a duo. Taking on a band name was a fresh start and chance to move in the direction which we knew we were destined. Azaleas symbolize first love and affection, so we figured it was very fitting for that time in our lives and will be forever.

What is it like doing music with your spouse?

Honestly, it’s the best thing in the world! It’s the only way we truly know how to make music. Our music is an extension of our life. Living every moment together and running a music business together really breathes life into our art. On a day-to-day basis we go through the same things together. So, our co-writing really clicks because we’re in the same place when we approach it.

Who have been your biggest influences throughout your lives?

That is a really tough question but if there was one band that had the largest impact on us musically and spiritually, it would have to be Caedmon’s Call. We both discovered this band at the beginning of our songwriting journey together and feel their music really helped shape the foundation of Azalea. Soon after that, we discovered “The Swell Season” and watching/hearing them do what they did encouraged us to continue with our musical desires. More recently, we have really been enjoying the music of “The Civil Wars” and feel their music has been a good influence on our forthcoming album.

You have released three albums together, and have a new one coming out this fall, how has your sound changed between the albums?

It has definitely been an evolution and we have certainly matured as musicians. In a way, this album is a bit of a coming home for us. We both studied different areas of folk music during our time at post secondary and that has always been very close to our hearts. Our first album had some folk & country influences, then we attempted to make our second album more commercial (whatever that means, haha!), and our last album had a serious singer-songwriter style to it – bringing us closer to where we are now. This next album is really going to pull from those early influences in our life. We’ve even coined the term “Gypsy-Americana” to describe a handful of songs that combine Eastern European Gypsy vocal styles with the harmonic structures of North American Folk traditions. We believe that we are making the music that we were always meant to make and this album is going to reflect that.

What can you tell us about the new album?

Well, as with all our previous albums this one will be recorded in our beloved “Sweet Dreams” studio which is in the attic of our home. But, differently than our other albums, we will be taking a much more organic approach to the recording process. We have experimented a little bit with this already and have loved the result. Our approach will be to record the base tracks live off the floor – vocals, guitar, and piano, all together, live in one room. Only at this point will we look to round out the edges of the recording with complementary instrumentation.

This question is one with a lot of answers because there’s no real formula for penning a song. However, we feel all good songs are born out of a real connection to life and experiences. So, we find it necessary to take time to sit back and contemplate life and get away from the hustle bustle of everyday tasks while unraveling the situations and circumstances around us. This gives us a multitude of material from which to write about. With regard to our process, we find sitting around the kitchen table while doing a little baking quite inspiring. One creative task can inspire another…

Where do you tend to pull inspiration from when making music?

Many times inspiration comes from confronting and dealing with the situations that arise in our own lives. Sometimes inspiration even comes from watching our favorite TV shows. You get to know the characters and then start creating storylines of your own in your mind which work themselves out in the form of songs. Other times it’s our friends that inspire us. For instance, a new song of hours called “Umbrella” was inspired by a friend of ours who always carried around an umbrella to shade herself from the sun. The song is not about her specifically, but just the fact that she was always found with her umbrella gave us a character to work with and write a song about.

You have previously released a holiday single, “At The End Of This Year…”, do you have plans to release any more holiday singles in the future?

We would love to… We really enjoy writing holiday songs. However, there are no specific plans right now.

When can fans expect tour dates across Canada?

We plan to tour the new album sometime next spring and would like to make it all the way across Canada. Over the next few months while the album is being finished, we look forward to a few special concerts closer to home in Ontario with a fantastic band – Gib&Tam, who are also great friends.

If someone has yet to see you live, how would you explain your show?

Our live concerts have become a beautiful interconnection of the intimate and engaging. They are a true listening room experience that provide the audience the opportunity to be drawn into each song fully, without any distractions.

This is the best way to sum up our concerts:

Two haunting voices supported by guitar, piano, and a trademark “suitcase-kick-drum” create a breathtaking concert experience. A must see for fans of “The Civil Wars” and the film “Once”.

Canadian Beats is all about Canadian music, who are your current favourite Canadian bands/artists?

“Gib&Tam” and “Jacob Moon” are both fantastic artists. We absolutely love the way they combine great artistry in their music with spirituality. We also really enjoy “Lennon & Maisy” … Those girls are so cute!

If I (Benjamin) remember correctly it was Michael Jackson’s “Dangerous” on cassette tape.

I (Mia) remember going on my first music shopping spree in Grade 6 and I picked up 3 albums –  Alanis Morrisette’s “Jagged Little Pill”, Celine Dion’s “Falling Into You”, and La Bouche’s “Sweet Dreams”, all of which I bought on Cassette & CD, “just in case”. Haha!

If you were able to travel anywhere to put on a show, where would you choose?

We would love to play a concert at the Bluebird Café in Nashville Tennessee.

If you had to explain your sound in one word, what word would you use?

What is your favourite part of summer?

The beach and the Canadian National Exhibition.

If you were heading to an amusement park or fair, what ride would you run to first?

Definitely the Ferris wheel or the haunted house… Whichever was in closest proximity.

If you were able to put together a festival show, which other Canadian bands / artists would you want to share the stage with?

We mentioned Gib&Tam earlier in our discussion. We recently had a very successful and enjoyable concert with them in our hometown – Hamilton Ontario. We always love sharing the stage with them. And it would be an honor and dream come true to perform alongside or simply open for Sarah McLaughlin.

Thank you so much to everyone who has supported us by buying our music and coming out to our concerts. We’re so grateful to everyone who has connected with us on Facebook, Twitter, Tumblr and Instagram. We love how plugged in you are! All your comments encourage and bless us so much!