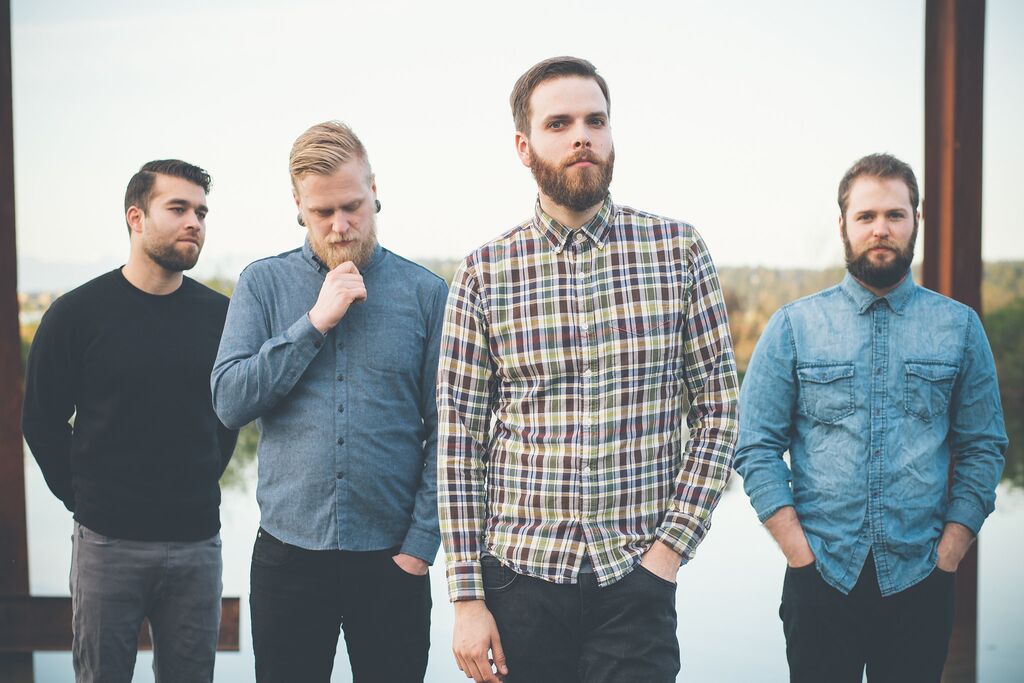 Nanaimo, BC based newcomer rock quartet Gold & Shadow are about to release their debut album “TORCH”. With an already impressive track record, having shared stage with numerous PEAK performance finalists, and being featured on multiple compilation albums, Gold & Shadow are sure to please rock audiences across Canada and beyond. I recently got the chance to talk with them, and get some info on the band and their debut album.

Can you give me a quick history of the band? Who’s in the band?

We started back in 2008 with a very different lineup of musicians, and never really formed a cohesive sound until a few years ago. When Wes came aboard, we wrote a completely new set of songs in a groovier, more rhythmic style, which became the majority of TORCH. We’ve always been a group interested in walking the line between pop sensibility and expressive, experimental music. I think we’re closer to achieving that vision than ever before!

What is it like to be in a band in a small town?

Depends on the town! Nanaimo is lucky to have a really strong community of artists and musicians that are very supportive of each other’s work. Nine times out of ten, you’ll see friends from other local bands in the audience at shows. In that sense, we feel quite nurtured. I think the disadvantage is that audiences here can be quite complacent about going out and seeing live music (and we aren’t perfect either). It’s not a part of the culture as much as it could be.

What got you into music?

Many hours spent at a young age with RollingStone’s “500 Greatest Albums of All Time” list. With the help of the Internet and my local library, I listened my way through those… it opened up worlds of possibility.

I was also lucky to have parents that put me in classical lessons from a young age, and that certainly started things off on the right foot. I had some incredible mentors that taught me so much outside formal theory though- teachers that took the time to play me Led Zeppelin, Jeff Buckley, and all sorts of jazz and progressive music. Each of the other guys has their own story, but we’ve all been playing from a pretty young age.

How did you decide music and playing in a band was what you wanted to do?

I’d always wanted to play in bands… I remember being very young and trying to convince my playmates to hit toy instruments in time with me. There were several other attempts later on, but it was in university that I happened upon a group of guys that were able to commit and do the hard work of rehearsing and arranging the musical ideas I was forming. That was an early stage of Gold & Shadow.

How did you come up with the name Gold & Shadow?

It’s a descriptor for where we live here on Vancouver Island, emphasizing the beauty of the West Coast and our incredible natural surroundings. If you’ve ever seen an arbutus tree in a forest on a sunny afternoon, you’ll certainly understand the “gold” part!

Places are very important- obviously Vancouver Island, but also experiences from previous travels in Turkey and elsewhere. Lyrically, inspiration is found in emotions of longing, regret, desire, frustration, yearning. Somehow those always drive the words onto the page. Musically, I’m forever a Radiohead nerd, but recently I’ve been loving Dan Mangan’s new record (“Club Meds”) and, always, Vancouver’s We Are The City.

Tell me a little about the album?

TORCH is a collection of songs we’ve worked on for over three years, a year of writing and two years in the studio. At this point, these compositions are the DNA of the group, and we definitely feel like they provide a solid framework for where we want to grow beyond it.

How do you write music? Does one person write or is it a group effort?

I think writing has a bit of magic to it. I’ll be doing something mundane when a melody will get dropped on me, and I’ll have to rush to find an instrument and get a demo down on an iPhone as quickly as possible. These things disappear quickly. After I’ve got something I can play through with a basic lyrical structure, I’ll bring that to the group and together we do the arrangements, figuring out rhythms and structure. The guys are really good at making sure things don’t get too conventional, chord-wise or structurally.

What can people expect when listening to the album? How would you describe your sound?

It’s a mix of upbeat rock/pop and more slow-building, atmospheric and heavy compositions. Like a less-folky Grizzly Bear, or a heavier Death Cab for Cutie.

How does small town island life influence your music?
Honestly, it can be an easy place to lose ambition because life is so comfortable here. That being said, the scenery is wildly inspiring.

How did you come to the name Torch for your debut release?

It’s touching on two main themes- light in darkness, and purification/redemption. The songs wrestle with a need for hope in the midst of despair, clarity amidst confusion, redemption in brokenness.

Where did you record?
Risque Disque Records (http://risquedisque.com) here on the Island. A brand-new studio built into this old stone church/barn-like structure in the forest- quite the place!

Did you produce the album yourself?

Yes, in collaboration with Risque Disque owner Todd Dunsmore, a good friend and an incredible talent (he also mixed the record).

How do you feel about the record? Did it turn out how you hoped?

We’re really happy with TORCH, as it’s our first full-length release that we feel represents our sound well. The tough part was maintaining a vision for the record during the two-year process of making it… it was easy to get bogged down in the details and forget about the whole.

What was it like to see your song “Half Moon” posted on Exclaim?
Incredible! We actually filmed the music video last fall, so it was great to finally get it properly released to the world.

What’s next for the band? Any plans to tour?
Yes, we’re heading out on a Western Canada tour in support of the record, starting Sept. 9 in Parksville and heading out to Saskatchewan and back (all tour dates can be easily found on our website, goldandshadow.com). After that it’s back to the rehearsal room to dream up the next phase of things.

What are your thoughts on the music scene in BC, and more specifically on Vancouver Island?

It’s easy to be very critical of what you’re intimately familiar with on a day-to-day basis. That being said, the opportunities exist if you’re persistent enough to go and chase them down. I think vibrant, vital music scenes start in small communities where everyone is supportive of each other’s work. That happens to a certain extent here on the Island, but there’s also this very competitive, cliquey side to it that can be really destructive creatively, especially in the bigger cities.

How can people get ahold of your music?

You can grab TORCH (when it releases on Sept. 4) from your favorite digital retailer (iTunes, Bandcamp, Spotify, Rdio, Google Play, Amazon MP3, etc.) or get a CD directly from us by stopping in at one of our Western Canada tour dates!

Be nice to each other, and get out and vote October 19th. Also thanks for any time you spend checking us out or supporting us, we are so grateful to you all.