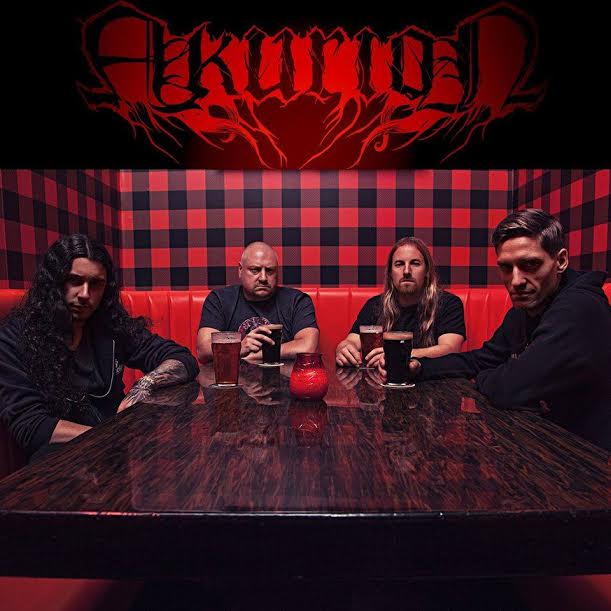 AKURION rises like a sunken ship, captained by evil and crewed by the damned, to bring a fresh, blast beaten nightmare to the ears of audiences everywhere.  Mike DiSalvo (ex-crytopsy vocalist) took some time to discuss his return to the music scene and the creation of  a new band, and shed some light on what lies beyond the horizon for AKURION.

First off welcome back, how are you doing these days?

Excited to be back on the scene? Thank you! Everything is good, I got nothing to complain about. For sure we are excited about the release of Yet Ye See Them Not. The response has been very optimistic thus far.

What prompted your departure from the music world, and why such a long absence?

Well, I did step away from Cryptopsy but I never left music to the wayside. Ever since I stepped down I have had projects over the years but never pushed them out to the masses. So, although none of them seen the light of day so to speak, I have remained very active.

What had you been up to prior to creating AKURION?

I have a studio in my house so I have been recording a fair amount of songs over the years. I had a project called Mabbus with my wife Gen, Mike Hubbard (Infestation, Warhorse) and another friend and we wrote a good 14 tunes and switched up instruments on pretty much every song. It was a great learning experience. I also had two other projects more recently, both are now defunct.

Were you writing or creating any music during your absence from the scene?

Same answer as above…

When did you decide to return?

I think Rob Milley and I had been discussing the project (Akurion) as far back as late 2012….so pretty much from that point.

What made you decide to form another band?

Well, it was the right time, right people, right direction that culminated out of early project discussions. Rob and I were both in a position to sit down and plan out what we wanted with no deadline concerns. We were also very fortunate that Oli and Tommy also shared the same vision and that enabled us to form the full band.

Does AKURION have a meaning, or is it just a name you came up with?

Yes it does have a meaning. Akurion is the name of a tremendous tidal marker in an H.P. Lovecraft short story called “The Doom That Came To Sarnath”.

How did the band get formed?

Rob and I had been working on loose arrangements for nine complete tracks and decided that we would start to invest our time in a jam environment and invited Oli and Tommy in. Immediately there was symmetry between the four of us.

Who are the members of the band?  I heard that there are other members from Neuraxis in the band, true or false?

It is true. The band is comprised of Rob Milley on guitars, Oli Pinard on bass and Tommy Mckinnon on drums, all have been involved and/or remain with Neuraxis.

When you write music, do you have vision of the song in mind already, or do you just let the music create itself?

Since the base of the tracks were already written, once we were all together in the jam room we ended up all having a part to play in the creation of the tunes. Alot of it has stayed true to form from the original ideas but it is normal to switch up arrangements as you go, you know, once you have four minds on it, things will change some.

What can people expect from AKURION? Will fans recognize influences from your past projects or is this something completely new and different?

Overall I don’t think Akurion sounds like our past or present projects, which is a good thing. There of course are many elements that are familiar as it is not a complete change of direction, it’s still metal, but in general the songs and the project stand on their own.

Where did you record the song?

At The Grid, right here in Montreal. It’s a great studio with a superb vibe!

Did you only record the one song there, or is there more on the horizon?

We went in and recorded Yet Ye See Them Not and a small part of another song from the upcoming album that we used for the teaser video. The next thing we will release will be the full length album.

Is it true the track “Yet Ye See Them Not” was recorded without triggers or a click track?

Yep, that is true. That was by design, we wanted an organic, earthy feel to the recording and we will follow suit with that same mentality when we record the full length.

Did you find any challenges to recording that way?

No, not at all. We played it through with only a couple stalls along the way but in the end it all went smoothly. None of us have gone down that road before with anything we have done in the past but we were up to the challenge and worked hard on getting it right at our jams.

Who produced the song?

Chris Donaldson did (current Cryptopsy guitarist). He is so easy to work with and he embraced our decision to record the way we did.

“Yet Ye See Them Not” is the first track released from the album, what inspired you to write the song?

It seems to have a few references to H.P. Lovecraft, is that so? It definitely has Lovecraft references. I have been hooked on Lovecraft for awhile now and I have been very influenced by his writings. YYSTN was drawn from one of his stories called “The Dunwich Horror”. I read it a few times and it’s one of my favorites so it was easy to find inspiration from it.

Any plans to release an album or maybe hit the road for a tour?

We will definitely release an album within the year but we have zero plans of touring for it.

What does the next year look like for the band?

Release the record, do as much as we can to promote it outside of playing shows and perhaps continue writing for future releases.