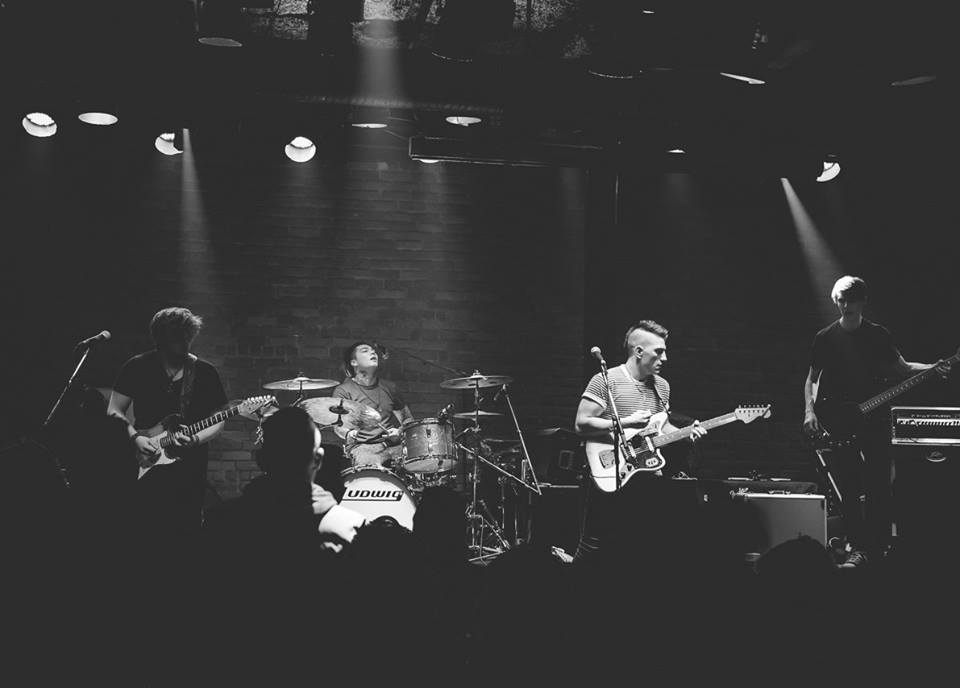 Vancouver indie rockers, Hawking just wrapped up a North American tour, and have released their self-titled EP which you can stream in full or purchase on their Bandcamp. Against many odds after a major accident, this band is back bigger than ever. We had the opportunity to interview Hawking, so check it out!

Can you tell us a bit about your tour?

It’s the longest one we’ve done yet! We headed across Canada from Vancouver to Montreal, then down the US east coast until we hit DC, then turned around and went up through the Midwest through Chicago and Minneapolis, until we crossed back into Canada and hit Winnipeg, and then we headed back home to Van from there. It was hands-down the most ridiculous adventure we’ve ever had. We met a lot of amazing people, and a lot of total douchebags too – but those are few and far between. We’ve luckily managed to keep pretty good company in the North American touring circuit!

Where were you most excited to play?

Probably NYC or Chicago! We’d always wanted to visit all the major music markets in the East, and now we finally got a chance to. They’re just as rad as everyone thinks they are. Crazy humidity everywhere though. Us west coasters don’t know how lucky we are.

What can fans expect from your shows?

Man, I don’t know, but I want them to expect a lot. If you’re paying to see a show of ours, even if it’s just $5 or $10, you have no reason to feel guilty about going into that venue hoping to be wowed. I don’t want crowds with low expectations seeing our show and going “woah you guys are actually really good!” I want crowds with high expectations saying “holy shit I’ve never seen or heard anything like you before, you surpassed my ridiculously high expectations”. I have no idea if we’re achieving that, but I know that’s what we strive for. Things are going really amazingly this year, so I hope we’re at least close to our goal of just being the most kickass band you’ve ever seen.

Your new EP is out now and the lead single is ‘Safe and Sound’. What has the response been like from fans so far?

Absolutely stunning. Everyone really seems to dig it. It’s a great balance I think we’ve reached between musical complexity, poignant lyrics that are honest and have depth, and big huge powerful pop hooks that make a song worth listening to for those of us not cursed with caring about that cool revolving polyrhythmic breakdown in 13/16 time.

Is that song a good indication of how the rest of the record sounds?

Yes! It would be a terribly misleading thing if it weren’t, don’t you think?

If you had to describe your sound to someone who has never listened, how would you do so?

I met a dude in a record store browsing Fall of Troy LPs and told him we were “progressive indiecore math pop” or something. He knew exactly what I meant. I told my mom we sound like “alternative rock”. She probably still doesn’t know what I meant. There’s really no winning. I think the easiest thing to say is “really fun, technical, guitar-based rock music with big pop hooks”. That seems a little lengthy. This answer has gone on too long. I have failed. Next question.

After your accident, some of you thought you’d never be able to play again. What was the feeling like when you overcame that obstacle?

Really beautiful, of course. When life gives you lemons, tell life that lemons aren’t rock n roll enough and to give you some gas money for your tour bus instead. Just because something awful happens, you have no excuse to let yourself be kept down. Keep pushing.

Does that have any affect on your music writing or style?

I think going through that crash opened me up more to the possibility of plumbing the depths of my emotions via my writing to cope with what we were going through. Before then, I was never really comfortable or confident enough to put my thoughts on display like that, so I’m certain that had an effect on my writing style.  As for the rest of us, I think that’s a little harder to quantify, but it sure as hell didn’t do nothing. It’s a part of what we do for sure, whether we like it or not.

Where do you draw your biggest inspirations from?

I’m a big fan of balls-to-the-wall Rock groups like Turbonegro and The Datsuns. As a performer, I’ve always valued the energy those types of bands put into their shows. In that sense, I’ve never really identified with Indie, Emo, Grunge or any other musical counter-culture that revolves around apathy. Apathy is a disease, in my opinion. If you don’t give a shit about what you do, then why should anyone else? Although Nirvana sort of proved me wrong there. Go figure. But as far as I’m concerned, working hard ought to come back in style any day now. Anyways, as a lyricist, From Indian Lakes and This Town Needs Guns have been my lyrical inspirations as of late. Instrumentally, we’ve been pretty influenced by bands like Animals as Leaders and Delta Sleep.

As a Canadian Beats tradition we ask the bands a few fun and silly questions for the fans to get to know you all better.
What is your biggest musical guilty pleasure?

If you were given a million dollars but had to spend it all in one day what would you spend it on?

I think I would buy a bunch of air, just to f*ck with the economy. “What!? Air is suddenly worth money!?” everyone on Wall Street will exclaim with glee. “Capitalism works!” Karl Marx rises from the grave just to slap me. World War 3 commences. Portland Oregon is taken over by mutant bees (still better than their current mayor). Everyone’s life is in shambles. My deed is done.

If each of the members in the band were an animal, what animal would they be and why?

We’d all be miscellaneous prokaryotic archaea. Nuclei and membrane-bound organelles are super out of style right now, so that’s a no brainer. If you’re a biology nerd and understood any of that, add me on Nexopia. Remember Nexopia? Nah but really, cheers you dweebs.

Is there anything you’d like to say to the fans?