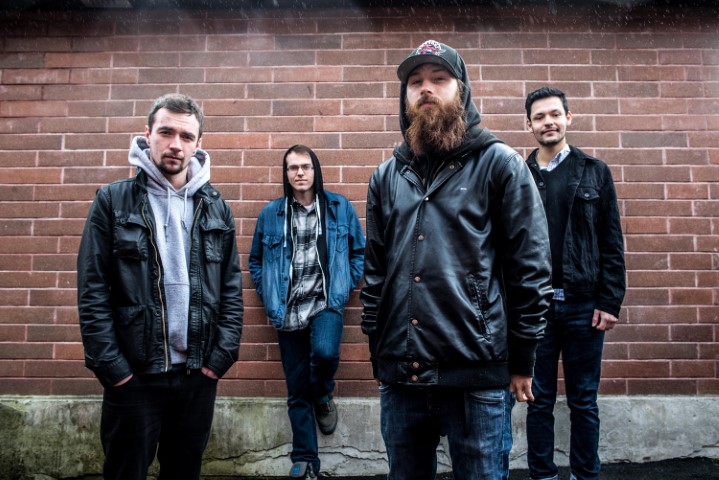 Fresh off there cross Canada tour, Calgary’s very own kings of hardcore, Fall City Fall took some time out of their hectic schedule to chat about some new and upcoming things, including some new music. Fall city Fall has spin kicked the monotonous hardcore scene yet again and this time it may be down for the count.

First off welcome back, how are you guys?

Hey, thanks so much and again we apologize it took us so long to get back you. Anyways, all of us are great, just settling back to the day-to-day grind and getting back into the swing of “normal” life. Always takes a bit to get back into and stay motivated so to speak.

How was the tour?

Tour was awesome as always, we actually hadn’t been out in about a year or so, I think everyone was just itching to leave; so it was defiantly a much-needed change of pace. Obviously us going out with our best friends in Slumlord you can really only have the best of times.  The shows were great! We caught up with a lot of old friends and made some new ones, overall it was successful run.

Any stories from the road you can share with us?

What happens on tour stays on tour. Nah I’m just joking, there are tons of story’s I’d love to share. I guess one that sticks out to me on this tour was in St. Catharine’s. It was Canada day and both Slumlord and us had the day off and we’re both staying the night at our friend’s house, which is located in the middle of down town in a apartment above some local business.  Well the roommate had about 300-400 dollars worth of fire works he had bought, so we all climbed on the roof tops of these apartments to the highest point and pretty much set them off, all at the same time.  It was Canada Day so naturally down town was packed and people were drinking and partying. We basically put on a huge firework display for everyone and they loved it. No cops came and the party went on!

What was you favorite part of touring?

Well I love traveling to different parts of the world. Where when I was younger I never even dreamed of seeing these placing, now I find myself playing half way across the world having kids scream the songs we wrote back at us. It’s a very humbling experience and gives you the adrenaline rush. Being able to share your most personal moments with complete strangers and having them connect with your words and passion, its absolutely beautiful.

How do you feel the audience received you?

Well I always feel that no matter what the audience’s music preference is, whether, it is metal or any other genre they can always appreciate the passion and emotion that we put into our live performances. We always give it our all and we always have fun doing it , so overall I think we gained some new fans on this tour which is extremely rewarding.

Who were you touring with?

We our touring with our best pals Slumlord from Edmonton Alberta, Canada . We have had the pleasure of touring with them before, and it’s always a good time.

Can you give me a brief history of the band for people who are just now crawling out from under the rock they’ve been living under?

Well for myself, (Keenan speaking) I started this band when I was in high school. FCF is the first and only band I have ever really been in.  There have been numerous member changes throughout the years. We have two albums out one, which was released under Victory Records and before that an EP. We are coming out with our third full length album TBA, we are really excited about it .We have had the opportunity to travel to the UK, Europe and some parts of the states as well as many cities and provinces in Canada. We’ve progressed musically through out the years. Some would classify us as “metal core” some “hardcore” others “progressive”. All that’s left to say really is that line up we have now is solid and exactly where FCF should be and we are far from throwing in the towel despite the many challenges we’ve faced.

So I hear you have a new album on the way, can you tell me what it’s called?

To be announced. We haven’t really decided on a name that particularly suits the atmosphere that is portrayed from this album.  We really want something that sticks out and truly defines the message we are trying to portray.

What inspired the name?

Many outcomes will inspire the name; this is why we have yet to find the perfect title. It’s out there though!

Is there a message behind your music? Can you give us a hint?

It’s pretty simple for the most part. Just be yourself, love and respect yourself and others around you, know what you’re fighting for. In a world where there is such an over abundance and an on slaughter of false pretense, bigotry and lies within the media, some find it hard to weed out the truth. We are just hear to remind everyone that we are all human and we all deserve to be loved, search for the truth and stand for something greater then just you and I.

What makes this record different than you previous releases?

We find that every Fall City Fall record is different in its own way. Whether it be member changes or maturing as musicians. For this album we went a little grimier and heavier than the last.  We really grew as a band within the last year, and I think this one really shows that.

Did anything change in your writing process?

Not particulary, we always try to write and play music that we love and want to hear. So it depends on the certain influences that we are all inspired by at the time.

Where did you record you new album?

We recorded this record Stu Mckillop at Raincity recorders, Vancouver BC.

Tell me a little about the recording process?

This time around it was a little different for sure, previous albums we had two vocalists, this time around we had one. That was a little different for the fact that I (Keenan) definitely felt the pressure for writing and recording all the songs lyrically and I felt I had something to prove to myself. As for the rest of the band everyone did amazing, we all were confident coming into it and proud of what we had written. I think for the most part we’re all just really excited to show everyone what we’ve been working on.  As well this will be our third album we’ve recorded with Stu from Raincity, so defiantly easier when you’re comfortable with the people you are working with.

Fall City Fall has been around for a while, where do you keep getting the inspiration to move forward?

I like to believe that it’s the fact that to some people its more then just a band. It’s something that in point of their lives, had actually saved them. I’ve had numerous people come up to me and literally thank me because this song or this album saved their life, its heavy its emotional and some use it as a copping mechanism, and I think at that point its become more then just a band, it’s a movement.

How did you get involved with Idobi Radio?

I guess it would have had to be our publicist “Jon Asher” we’re lucky and forever grateful to everyone who’s helped us along the way. Whether it be giving us a floor to sleep on or putting the time and effort in giving us any opportunity to share our music with the world.

When can fans get a hold of the album?

Well our goal is to have it available for everyone to hear it. Just keep and open ear out and we’ll show up, websites, radio, TV, wherever we can sneak it on to.

What does the future hold for Fall City Fall?

The Sky’s the limit. Honestly I know I’ll be doing this until I physically cant. Its something that’s grown to be apart of who I am and there’s really no turning back. We’ll be pumping out tons of new music and demos just keep listing.

Yea, from the bottom of our hearts, a thousand thanks you’s to everyone who has given us the time of day or a floor to stay. Music is universal and teaches us endless possibilities.  “Let us love and let us be loved”