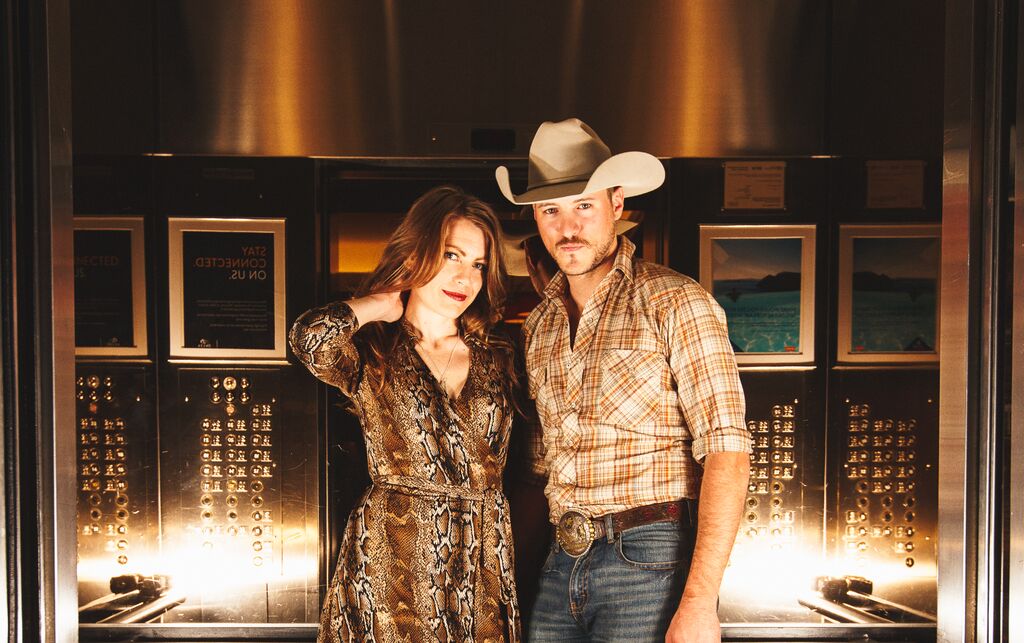 Belle Plaine & Blake Berglund are known to some as the Prairie Sweethearts, and are about to release a collaborative double-single, gold-toned 7″ vinyl record on September 4, 2015. The couple recorded two tracks from fellow Saskatchewan songwriter, Zachary Lucky’s back catalogue, “Town to Town” and “Saskatchewan”.

On top of this, the two will be heading on our, starting on September 2 in Saskatoon and ending up in Regina on September 27, with the tour featuring dates in Alberta and BC along the way. The show will feature each separately, and end with them coming together to do their duets.

I had the chance to conduct an interview with these two talented artists, and now it’s your chance to see what they had to say!

How long have you known you wanted to pursue music as a career path?

Belle: I’ve been singing ever since I can remember.  I was always excited to be onstage and feel most at home in my body when I sing.  The hurdle for me in pursuing music is more about being self-employed and trusting that my passion will provide.

Blake: My motives have changed in the pursuit, and have forced me to question when I actually developed it as a career path. For the sake of the question, I went on a horseback ride with my brother on my 26th birthday and that’s when I decided I wasn’t going to quit.

Did you always have a fondness for country & folk styles of music?

Blake: I was attracted to writing country music when I realized it was the most accessible way to tell a story. The sound was a staple in my upbringing, but it took until my early twenties to come full circle with an appreciation for the genre, and what it means to a certain sect of people. Willie Nelson’s version of “Help Me Make It Through The Night” introduced me to Kristofferson, and it was a rabbit hole from there.

Belle: I have a similar story.  My parents kept the country music station on at all times.  Dolly Parton’s voice is one of my first memories.  I certainly distanced myself from country in my teenage years, but by the time I was in my mid-twenties I was listening to Gillian Welch.  She brought me back to the fold.

Belle: Writing is such a mystery to me.  I’m still learning how to do it.  Blake is so skilled at weaving a narrative.  I’m far more literal in my writing.  I envy his ability, but I’m also watching close so I can learn a few things.

Blake: If you wait around for inspiration you’re going find yourself with a catalogue of 5 songs opposed to 150. It’s incredible when the songwriting gods are looking down on you, but if you aren’t rehearsed in manipulating words and formulating melodies you will not give an incredible concept the expression it deserves.

I also don’t subscribe to the idea that a writer has to write a pile of “bad” songs to have one “good” one. If you know the concept/melody/lyric is flat – abandon ship. Craft what feels good. It’s like building a cupboard or working on a slapshot.

Belle: You see what I mean?

You recently released a single, “Town to Town” along with a music video, what was the highlight of making a music video?

Blake: We had many constraints to work within when making the video. It was very do-it-yourself with a budget of next to nothing – one camera and a little footage of being in studio last year forced us to approach it with a creative mind. Once we discovered that human reaction was what the video needed it was very rewarding to compile those interactions. I found the highlight to be that people seemed to be surprised it was “country” and then acted like they figured out a puzzle as the song continued.

You will be releasing a double-single vinyl record on September 4, can you tell us more about that?

Belle: Blake and I were inspired to record our friend Zachary Lucky’s material while we heard him perform in Kansas City at Folk Alliance International.  We wanted to pay homage to a time when songwriters covered their friends’ work.  We chose “Saskatchewan” first because it’s a love song for our province.  It speaks to my relationship with leaving and returning over the years.  How home is home, even if you do hate the winters.

The recording was also an opportunity for us to combine our two bands.  We both have the good fortune of working with incredible musicians as our regular band, and everyone fits so well together as one group – both musically and as a touring family.  And then we added the delightful Jason Plumb as producer.  Blake and I just wanted to draw attention to the community that we have in this province.

Blake: My attraction to Zach’s work extends past his ability to craft such strong material. I look up to him as an independent musician and hold almost a sense of pride in his touring schedule – it’s nice to be able to say that an artist who gets 200 shows in a year is ours to claim in Saskatchewan.  The more we all build off each other’s efforts and support the community in the process, the quicker we will all experience a rising tide effect. I never belonged to an artistic community until I began to spend time with Belle; she lives her support for others and the arts. It’s become the most inspiring approach to my career.

How will people be able to get their hands on one of these?

Belle: Yeah!  We’re doing things the old way.  You have to buy them at the show.  If someone is really keen for a copy, they can get in touch with me through the website, but Blake and I want to personally put these in peoples’ hands.  They’re special, and there aren’t that many of them in the world.  The songs are up on iTunes September 4th as well.  So, it’s not totally the old way.

You are taking off on tour with a string of dates through AB, BC & SK, are there any specific stops that you are most excited for?

Belle:  All of them!  I’m excited to be on the road and find new paths in the songs with my friends.  I’ve never toured with a band this big before.  It’s very exciting.

Blake: I had the opportunity to play The Dream Café in Penticton as an opener for Del Barber in October. I’m quite excited about getting back into that area of the country but no one show outweighs the next as far as anticipation goes. Each venue has its own vibe and will create its own style performance – it’s going to be fun to adapt to those restraints.

How did you decide to do separate sets and then close with duets?

Belle: The performance is built to be dynamic, and to showcase everyone’s musicianship.  It’s just going to evolve as we work together on the road.

Blake: The show is still developing through rehearsals and will continue to do so through the tour. The duets are fun because it allows an opportunity to interpret material…it’s intimidating to change classic songs to have an edge that compliments who we each are as artists. We both demand so much out of ourselves as songwriters that it’s nice to let the audience experience how different we are as a way to set the stage for how well we work together.

How would you explain to someone who has yet to see either of you live, what to expect from this show?

Belle: We’re both storytellers.  Blake is more of an outlaw/rodeo country performer, and I play in the margins of folk and occasionally cross over into the worlds that Patsy Cline and Peggy Lee lived in.  It’s a great sound to combine.  The point of these shows is to connect with people – offer them authenticity and honesty.  We live in strange times, and I know I appreciate artists who really care about what’s going on in the world and bring that to the stage.  That’s us.

Blake: Bought, would have been either Garth Brooks’ The Hits or Adam Sandler’s What The Hell Happened To Me. The first tape I owned was Bryan Adams’ So Far, So Good, first CD was Ace of Base It’s A Beautiful Life. Don’t ask.

Belle: Being outside with the sun on my skin.  Running, riding my cruiser, swimming… whatever.  Give me heat.

Blake: I went for a Kayak today on Wascana Lake with my buddy Trav. I’m not really a water kinda guy but it was a pretty solid workout. Baseball. I like baseball.

Belle: Eating anything right off the plant.  Cell division and photosynthesis taste delightful.

Belle: Any song??? “Five Years” by Bowie.  Or “The Chain” by Fleetwood Mac, but the harmonies would have to be tight.

Belle: Thank you for supporting music.  It is amazing and inspirational to me.

Blake: Be active in your search for music. It’s easy to trust what’s given to you by the industry – our country is bleeding talent and has the strongest songwriters in the world across all genres. You know when an artist is authentic or just playing the game. Demand greatness out of whomever you support.