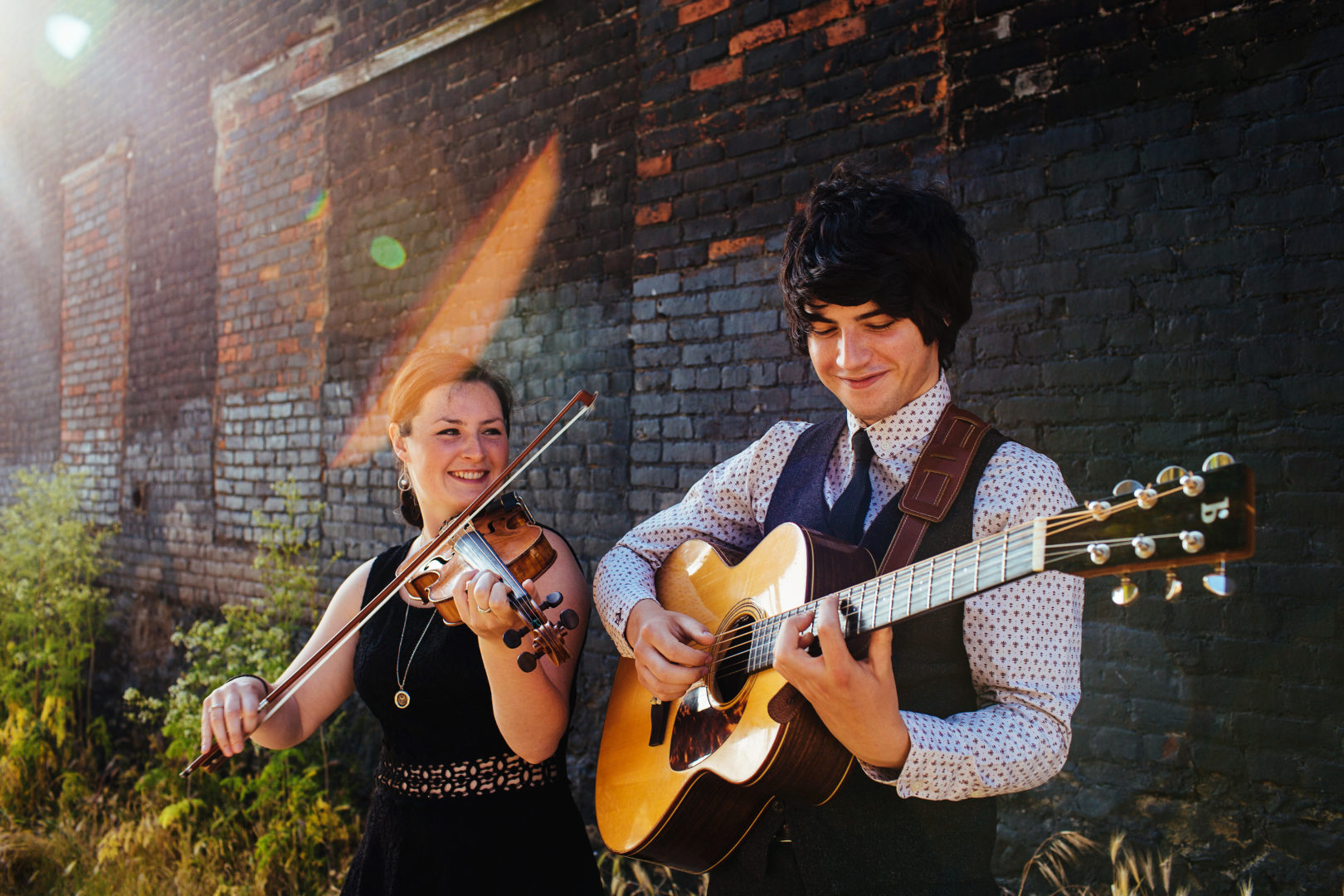 Qristina and Quinn Bachand are a brother and sister duo from Victoria, BC who have just released their new album, Little Hinges. The band have recently been nominated at the Canadian Folk Music Awards and the Western Canadian Music Awards. Keep reading to find out what they think of all the exciting things happening for them.

We are a brother-sister folk/roots duo. We grew up in Victoria, BC, but are now living and studying abroad in Boston, USA (Quinn) and Limerick, IE (Qristina). We recently released our third studio album, Little Hinges, in which we attempt to swing open the doors of the beautiful but oftentimes rigid-minded traditional music we love to the various sounds and inspirations we have accumulated over the past few years. The result was an album split into two sections, separated by the title-track, with a slightly more traditional first half followed by an experimental second half.

What can you tell us about the writing and recording process of your new album, Little Hinges?

Quinn: A few years ago Qristina moved to the Netherlands to do a Masters study in Health Sciences. It was at this time that I started working on my own gypsy jazz project and recorded an album with Joby Baker (the same co-producer we worked with on Little Hinges). For about a year Joby and I worked together on a number of other artist’s albums and “geeked-out” on our shared love of a certain type of production that we felt captured the vibe of the music in its best light. When it came time for Qristina and I to record our new album, we brought together a collection of traditional and original tunes and songs that we thought would fit well together on a slightly experimental album like this. Most of the tracks were recorded at Joby Baker’s studio in Victoria and a couple I recorded in our parents’ basement and backyard in Victoria during my last year at high school. We tried to use as few digital plug-ins as possible by using real objects around us to create reverb and delay (for example, garbage cans, metal pipes and analog machines like the space echo re-201) and on some tracks attempted to capture the ambient sound of the environment we were recording in by tracking outside or taking portable recorders traveling with us.

Little Hinges is your third release but the debut of Quinn’s singing voice. What made you decide to have Quinn sing on this album?

Quinn: It wasn’t really a conscious decision to do that. I was singing songs so it was natural. Also Qristina and I have pretty different voices so that is nice as a contrast.

You were recently awarded Top Duo and Top Traditional Group awards from Irish Music. How did it feel to be rewarded for the hard work you’ve put into your group?

The Irish Music Awards wins were awhile ago now (2010 and 2011), but were definitely a huge honour! We love Irish traditional music and, though we didn’t grow up in the tradition, we are very passionate about it. Being recognized was very rewarding.

You have nominations for the upcoming Canadian Folk Music Awards and the Western Canadian Music Awards. What are you most excited for with both of these events?

We recently found out that Little Hinges was nominated for a Western Canadian Music Award for Roots Duo/Group Recording of the Year. The Canadian Folk  Music Awards have yet to be announced. We’ll see! We have had a lot of nominations at the Canadian Folk Music Awards in the past and no wins – who knows, maybe this is finally our time!

Qristina: We just finished our summer tour and are both heading off to school pretty soon. Quinn was awarded the Slaight Scholarship to study music at Berklee College of Music in Boston (which covers his tuition and room and board)! He will be starting his second year there in September. Around that same time, I will be moving to Limerick to do a Masters of Traditional Irish Music Performance. Anyway, we are trying not to book too much during the school year as we would like to focus on our studies. Instead, we are focusing on booking tours for the summer of 2016 and smaller groups of performances during the school year. We are also booking an east coast tour for during our winter break (January of 2016).

It really depends on the audience we’re playing for and whether we have a band with us. When we’re playing as a duo it’s a lot of fun to rip some fast reels and songs from the first half of Little Hinges but when we’re with the band it’s nice to sing some of the more dynamic songs that have electric guitar and drums (from the second half of the album).

We have been active on YouTube since the start of our musical career (around 2007), and our channel still houses videos from those early times. From time to time we see fan musicians from other parts of the world posting covers of our music. We love that. It’s very cool that people would like our music enough to learn our arrangements and play along.  That is actually how we learned a lot of what we play – using technology like iTunes and Youtube – and it’s amazing to see that come full-circle!

The list keeps getting bigger and bigger! It would be fun to work with a string arranger/composer and have an orchestral sound for something to fill out the sonic spectrum, as it can be tough doing so with just guitar/fiddle.

Qristina: Obviously some of the greats: Neil Young, Leonard Cohen and Joni Mitchell, for example. When it comes to traditional fiddle music, Cape Breton music was really our first foot-in-the-door of Celtic music. Back in 2006 our mom organized a cultural exchange between around 20 youth from the Cape Breton Fiddler’s Association and 20 youth from the Victoria Fiddle Society. It was during this exchange that Quinn and I were exposed to Cape Breton fiddling for the first time. This was one of our earliest inspirations and we both spent the next while listening to a lot of Cape Breton music from fiddlers such as Ashley MacIsaac, Jerry Holland and Angus Chisholm. Since then, Quinn has had the opportunity to tour with Ashley, including a month-long tour of Australia.