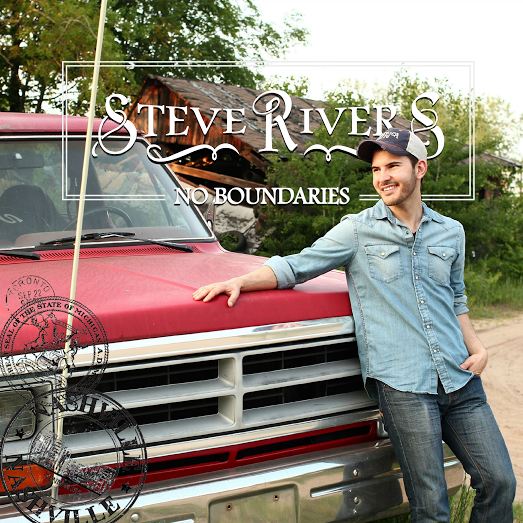 Steve Rivers is a Country singer/songwriter from Canada but is now residing in Nashville. Steve is well known for his high stage presence and keeping his own personality within every song that he creates. Steve has been rolling in lots of attention from fans since the release of his first album ‘Temptations’ in 2012. He has opened up for great artist such as Eli Young Band, Frankie Ballard, Parmalee, and Eric Paslay. Steve has been topping country charts with his songs ‘Truck. Beer. Girls’ and ‘Saturday Night’.

Steve Rivers is releasing his second full length album entitled ‘No Boundaries’. The album features seven tracks that demonstrate his talent and love for his very own background. After listening to ‘No Boundaries’ for the first time I had to replay it again because I really loved it and wanted to keep listening. No Boundaries is a full country album that reminds me of home and family. It was hard to narrow the album down to my top two songs because they were all good but I was able, the top two songs for me were ‘Born For The Highway’  (track one) and ‘One Road Town’ (track six). Born For The Highway is the first song on the album and is makes the listener hooked on the album with its catchy chorus. One Road Town was the song that reminds me of home more and is about what Steve River’s path would of been if he didn’t follow his music path. This is honestly one of my favorite albums I have reviewed and can’t wait to hear more from Steve Rivers!