Interview – Boy With An Atlas 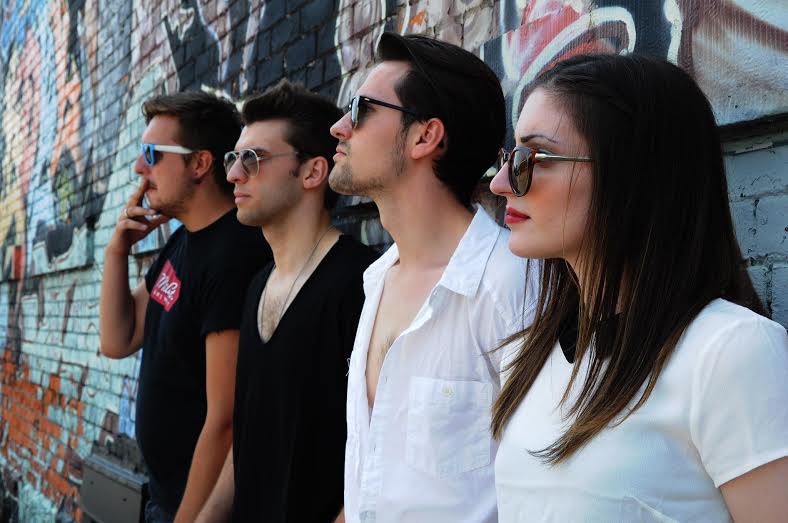 The birth of Boy With An Atlas occurred when singer-songwriter Riley Ducharme and pianist Spencer Jones met in their first year at McMaster University. Starting as a 4-piece folk band, BWAA released their debut EP “Doors of Dublin” in September 2013. Over the years the band has seen changes to the lineup, and now a change to their sound. The band is introducing their indie/rock sound with their latest new single Already Started, from their upcoming EP, A Night in the City. The new Hamilton rockers are ready to share their new sound with old and new fans. A Night in the City can be pre-ordered on August 14th from all major digital distributors.

What were the main factors that lead to your sound transition from folk to indie/rock?

Riley: We forced it, really. It was less of a transition and more of a conscious decision to change. Folk can be fun, but our acoustic instruments didn’t give us the breadth or flexibility that we wanted, and when we moved out of residence and started to accumulate enough equipment to make other sounds, it lost its appeal. I found myself writing in different genres just because I was so bored with our sound. Spenny and I started jamming together outside of practice, almost in secret. We’d switch things up—I’d play keys and he’d play electric guitar, or I’d play drums and he’d sing. We started to dream of a new BWAA (which led to our side-project, DREAMERS, but that’s a tangential story), and after more than a year of this, we realized that we weren’t going to get closer to our BWAA vision without forcing the change ourselves. In 2014, we replaced half of our line-up and brought in Stew and Annette—that gave us a good opportunity to say “hey, forget all that old garbage—we’re re-writing the whole set.” Going electric took courage (and a good year of sounding like absolute shit), but we have never looked back. I love our new style and I’m thrilled each time we get to play it live.

Has the transition changed the way you approach songwriting?

Riley: Completely. I now write music with a DAW (Logic) as opposed to just with an acoustic guitar. This has given me an almost unlimited palate of sounds and tones to play with—it means I’ve had to become a bit more of a perfectionist, but it’s also just such a joy for me. The process as a whole is more collaborative now too. Spencer and I are constantly sending demos back and forth and editing each other’s work. And when we bring it to Stew, he takes the rhythm section to the next level. I think our writing is also less self-absorbed. I mean, writing in general is so self-centred, but our old stuff was particularly selfish. The songs were both for me and about me. We only played them live because they sounded nice. While I refuse to work on a song unless it carries a lot of personal meaning, we’re also making an effort to write for more than just ourselves. Sonically, we are trying to integrate a catchy “pop” sound that can more easily draw and please listeners. But really, this just means improving our songwriting, because I think pop brings us closer to an ideal balance between innovation and familiarity. Lyrically, I have been making an effort to write about things beyond myself too. Writing from different perspectives and personas has allowed me to delve into themes that I believe people will be able to really relate to.

What are the main influences on your songwriting?

Riley: There are so many! And I think our strongest products draw from the most influences. I try to learn something new from everything I listen to, and if it’s good, I’ll try and integrate it into my writing. But here are a few big-name influences: David Bowie, The Smiths, The Killers, Michael Jackson, Oasis, Jimmy Eat World, Iggy Pop…

Will your performances still include songs from both genres?

Riley: No, and mostly because it would double the amount of equipment we would need to bring to each show. If people want to hear our old sound, they can visit our bandcamp page or the DREAMERS bandcamp page. But, honestly, a part of me sees BWAA 1 and BWAA 2 as two completely separate projects that simply share a name.

How have/do you think your fans will take to the change?

Riley: I think they will love it. And we shouldn’t be surprising anyone with the change either—we’ve been live-testing A Night in the City all year. It will be fantastic to finally have a recorded product to represent who we are and where we are heading to next.

Does BWAA have tour plans for this year?

Riley: We do! We haven’t got anything set in stone at the moment, but expect to see us throughout Ontario this year. We’re going to take the province ;). Then Manhattan, and then Berlin. Oh, I forgot to mention Leonard Cohen—a big lyrical influence.

Hamilton has a vibrant music culture. Are there any other local bands that you admire or would say have influenced your sound?

Riley: Yeah, we like Hamilton a lot. The art scene is incredible. People should now call it “Art City”… it’s a truer name than “Steel City.” And yes, we respect and look up to so many Hamilton-based bands—Arkells, the Dirty Nil, Illitry, to name a few (oh my god, it would be so cool to play with them).  And as I mentioned before, I make an effort to learn from the music around me, so I would be lying if I said none of these guys have influenced us. Illitry’s lyrical and sonic depth, for example, has greatly affected me. And I don’t think I’ve seen many bands with better showmanship than Arkells. But as much as we look up to other bands, we will always stay true to ourselves.

What is everyone’s favourite Killers song?

Riley: I would have to say Mr. Brightside

Spencer: Of their marvelous discography I think Jenny Was a Friend of Mine sticks out as my favourite for its amazing live energy, lyrical content and the incredible bass performance.

Annette: I have always really loved A Dustland Fairytale

If you could put together a Canadian music festival- what artists would be on the lineup?

Arcade Fire, Half Moon Run, Folly & The Hunter, TOPS, Arkells, Mother Mother, Stars, Metric, Hot Hot Heat, The Stills (RIP),  Japandroids, Rush and Hedley (only so that we could rudely cancel their slot at the last minute).

What was the first song you ever learned to play together as band?

Where would be your dream venue to perform?