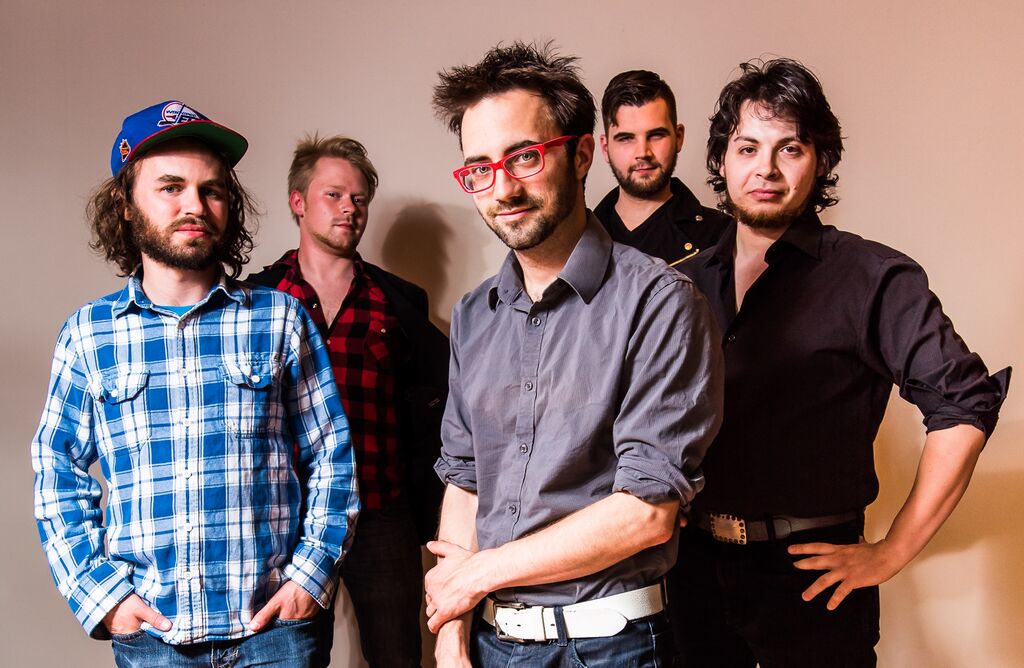 Hearing Trees is a five member band from Winnipeg consisting of Graham Hnatuik (vocals), Joel Heidinger (bass), David Huffman (guitar), Kyle Kunkel (drums), and Carey J Buss (guitar). They are set to release their EP ‘Dear Sahara’ on August 28th and have released a video and tour dates to go along with it. If you want to learn more about this indie rock band, be sure to check them out online and head on over to their website to see if they’re stopping near you on their tour.

You’re about to release your new EP ‘Dear Sahara’, what was the writing process behind this release?

Slow and methodical…a lot of re-writing! We tend to play live a lot and let the songs evolve on stage where we play them a little more loose, then sit down and fine-tune them.

Can you give us any hints on what to expect from the EP?

Sure! It goes from a big, huge-sounding arena rock feel to quiet, restrained spoken word and slam poetry, and back to big guitars.

Do you have a favourite song on ‘Dear Sahara’?

Yeah I sure do, “Magnetic Moment,” the second track, because it went on such a writing journey. Wow, we almost threw that song out. But it turned into such a beautiful thing. “Kabloona” would be my second-fave, from a book about a woman from Winnipeg who travels by kayak to the Arctic.

How did you come up with the name for the EP?

It was inspired by letter-writing. The title track started as a letter, and every song has some element of letter-writing in it, so we connected all the songs through this theme, letters.

You’re touring through a majority of September, what can fans expect from your live shows?

We like to craft our shows and sets around not just playing our songs as we recorded them…I’ll do poetry over extended intros or outros, and we like to try and link songs together musically.

We play a different set every night. We like there to be room for experimentation and art and a space for the audience to connect. We aim to make every show special.

Shipwrecker, from our debut EP.

We have an extended intro for that, which we only play live, and there’s so much room to put poetry in, but not take away from the song because of its soaring, epic chorus. I think we topped it out at 9 minutes once.

Are there any stops that you’re really looking forward to?

Yeah, all of them! We’ve never been west as a band yet, so it’s all new and fresh to us.

Very much looking forward to Vancouver, in Kelowna we’re sharing the bill with another great Winnipeg band (Yes We Mystic) and a lot of friends and family in Regina that get to see us.

There will likely be a new song or two put out this winter.

I’m always writing poetry and posting on the band’s website…things sort of evolve from there even if I’m not aware of it yet.

I studied biology for 6 years.

What has been your favourite concert that you’ve attended?

Silversun Pickups in Winnipeg, 2009. That band went above and beyond, it was a very special night.

Do you remember the first album you ever bought?

No, actually! I know, weird eh? There’s albums I bought as a teenager but music never truly entered my consciousness until I was out of high school.

If you were in charge of a weekend long music festival, who would be on the bill?

I’ll appease our entire band by announcing the most unlikely festival ever: Amanda Palmer, The Chariot, Fleet Foxes, Foo Fighters, and headlined by Peter Gabriel.

Where are the top three places you’d like to travel?

Copenhagen and Tokyo for sure. The third, oh dunno, HALIFAX! I’ve never been way out east.

Welcome! We’re new but we hope you like what we’re building. There’s room on board our ship if you’d like to help us navigate. Go to your local poetry slam!