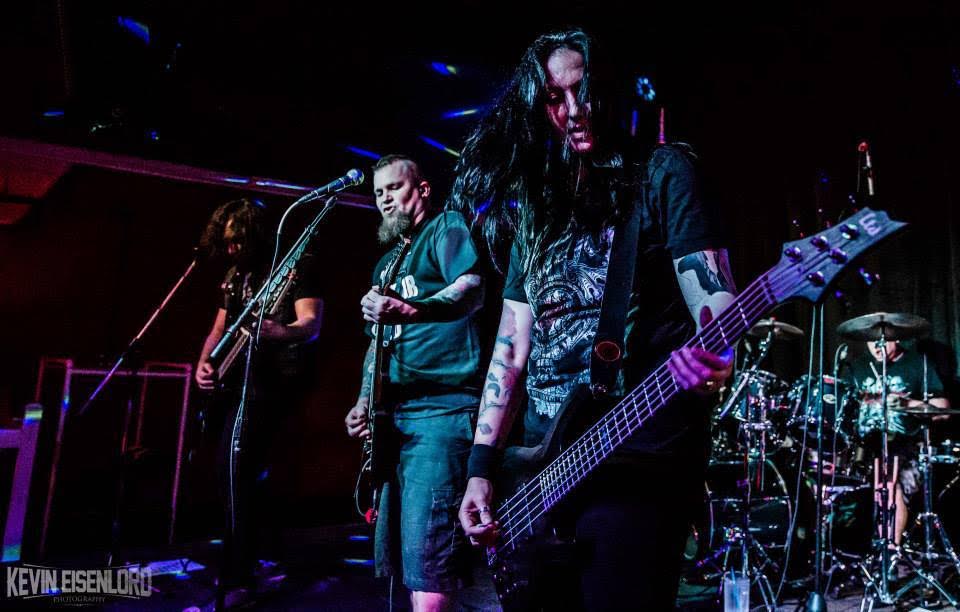 Vancouver death metal majesties, Obsidian, are about to completely blow audiences away with the release of their new album, “Time Erodes”. Eerie soundscapes and meat hook musicianship once again prove that the west coast is not to be fucked with. I had the chance to speak to the guys and get the low down on “Time Erodes” and what lies beyond the horizon of its release.

First off, how are you guys?

We are doing really well, thanks!

Can you give me a brief history of the band for people just discovering Obsidian? And who are the Members?

We’ve been together for 2 years. Stef (drums) Aurelia (bass) and Jason (vocals and guitar) met up two years ago at a music store, got talking about their general musical likes, jammed once and from the first jam we had three songs. The first song we jammed “Downfall” made it on the album and we still play it live to this day! We tried out a few guitar players, one guy fit for a while, then he wanted to go to school right when we started recording and he quit three weeks before a gig, we asked around if anyone could fill in for the gig, Daniel was a singer in another local band, The Darker Days, he offered to fill in, we jammed a couple times, he played awesome and he’s been with us ever since. He was able to contribute to the recording adding vocal and guitar parts!

Where did the name “Time Erodes” come from?

From the first song on the album “Time Erodes”

Where did you record your album?

We tracked the drums at Nexus, a studio Jason helped construct, so we get a great deal there! Jason has a home studio where we track all the guitars, bass, vocals and any other small overdubs. This has help us keep the costs of recording very reasonable for us, if anyone has recorded, the cost of studio time or good recording gear can cripple a band.

What was your favourite part of recording Time Erodes?

The whole process from start to finish, sometimes I get separation anxiety and don’t want to finish a project! Drums, being the first thing to be recorded is great, it means things are past the talking stage and we are on! Once the guitars and bass start getting tracked is fun because you can really begin to hear the songs take shape, and gives the opportunity to re-write riffs if things aren’t jelling well with what the drum parts are, as well as add other guitar layers that add to the listeners experience when listening to the album, but when we play the songs live one of the guitar players will have to pick and choose what part they play. But the real fun comes once the mixing starts, the songs are tracked, now putting the right eq on things, the correct compression for each track and finding the right level balance between instruments, a sign the album is wrapping up!

Did the album turn out the way you hoped? Were there any surprises in the recording process?

We are very happy with the way things turned out, sometimes bands go in with too high or no expectations. Obsidian has  a lot of recording experience from our previous bands, so getting things recorded wasn’t any issue. I guess the surprise would be how well the songs flow together, we have some really fast aggressive songs, and some more groovy heavy songs and a couple melodic transitions, and I wouldn’t say anything is out of place as the whole of the album.

How does Obsidian write music? Do you all write together?

Every song has its own process, some songs start as just a riff and we build it at the jam space, other come in as complete ideas then get worked over until we are happy with them as an Obsidian song. As an example, we recorded 10 songs for Time Erodes, we had about 15 to choose from, those that didn’t make the album aren’t even in our practice list of songs for the next album.

Is there a specific theme you draw inspiration from when writing different tunes?

Lyrically things like politics, war, real social injustice not the media flavour of the day injustice, things of history.

Is there a message behind your music?

Hmmm the manner that I write lyrics is more of a poetic storytelling, if you know what the topic is, you’ll get the meaning, but someone just listening can get something out of the song as well, a dose of reality I guess. The song Useful Idiot is an example of that, in Soviet Russia they had what were called useful idiots, mostly the younger generations, that would push forth the political agenda of the day, little did they know, they were the first ones to get eliminated when the State took full control.

What do you hope people will take away from this album, if anything?

Do you have a specific song you like playing the best?

Time Erodes has an awesome vibe, Useful Idiot for its pure aggression

We get asked this a lot, there isn’t any one song we like more that the other, we have been told by fans and those reviewing that Time Erodes, My War, Useful Idiot and Revolution Dead are stand outs. It’s hard to be objective with something you’re so deeply involved in.

If the band could only listen collectively to one album for the rest of eternity, what would it be?

Our album Time Erodes? This is another difficult one, as we all have varying things we like individually.

Being a very multi cultural band, how do you find the metal scene in Canada and more specifically Vancouver differ from the scenes in your respective countries of origin?

Vancouver has its ups and downs for local live music, some years it’s awesome, other years bands struggle to get crowds out. It’s not for a lack of quality bands here. Germany, where Stef is from their local scenes have been thriving, people want to see live music, I think with Vancouver we are up against a lot of things, we have an NHL hockey team, WHL hockey team, plus Football and a soccer team to compete against, not to mention that in under 3hrs you can be hiking, water skiing, snow skiing & snowboarding, camping amongst other outdoor activities, nearly 12 months a year if you want.

What’s next for Obsidian? Any plans to tour?

We are about 7 songs into writing the next album, we plan on starting to record in the fall if all things go as planned. Play a few more shows to wrap up the year. Put out our follow up to Time Erodes sometime next year, and try and hit some of the Metal Fest’s out West here, some small weekend trips here and there.

Our album can be purchased here:
https://obsidianvancouver.bandcamp.com/releases