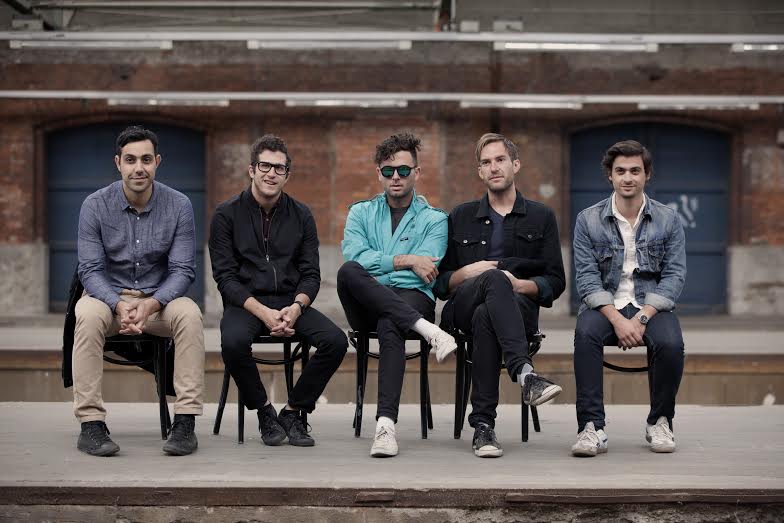 If you’ve listened to any Canadian radio, watched Much Music or follow the Canadian music scene at all, you’ve definitely heard of Hamilton ON based band, Arkells. With hits such as “Leather Jacket”, “Come To Light” and “Cynical Bastards”, they are one of the more well known Canadian rock bands around, and we were lucky enough to score an interview with Max Kerman. I hope you enjoy reading this interview as much as I enjoyed coming up with the questions!

You released your newest album, “High Noon” in August, 2014, how has your sound changed since the release of your first full length LP, “Jackson Square”?

I think the changes you hear between Jackson Square and High Noon are a part of a natural evolution of just being music fans ourselves. A large part of our desire to make original music comes from the buzz you get when you hear a new song that moves you. As musicians, we get inspired (and probably a little jealous) and want to create that feeling for someone else.

Can you explain your writing process behind this album?

The records and bands that influenced JS aren’t all the same that were in heavy rotation when we were making High Noon. Within the band there’s a real hunger to be exposed to new sounds and voices. The foundation of our musical experience will always be the records our parents had on around the house and we love those tunes, but it’s not like we’re not listening to the same Neil Young record over and over.

I work pretty hard on coming up with some lyrics and a chord/melody that are worthy of bringing to the guys. I’m constantly writing down lyrical phrases and recording voice memos in my phone. From there we start hacking away as a unit until it feels like something we’d want to perform live. Sometimes it comes quickly, sometimes it takes months.

I heard that you like to listen to podcasts and have debates in the van, what podcasts do you tend to listen to?

Oh so many – NPR Fresh Air. WTF. Slate’s Political Gabfest and The Gist. New Yorker Political Scene. Grantland has some great ones. Podcasts are great time fillers, and they get your brain working!

Do you have a certain song on “High Noon” that you would recommend to a new listener?

I think Never Thought That This Would Happen shows off the strengths of the band. It was never a proper single, but it’s got all the things that folks might associate with an Arkells tune: cool groove, story telling lyrics, sing-a-long chorus, we try to rip off the Beatles in the bridge etc..

You have been on tour promoting the album, and have released dates for your fall tour, including some festivals, such as Osheaga Festival in Montreal, Squamish Festival in Squamish and Harvest Picnic in Dundas ON, what’s it like playing for a festival crowd compared to an official Arkells show?

If you have good weather and a crowd eager to see you, a festival experience is pretty hard to beat. The sets are shorter, and you might be playing to kids who haven’t seen you before, so you kind of stick to the “hits”…Also catering and an air conditioned trailer is pretty awesome on a hot summer day. I think the headline club shows is where we are must comfortable at this point. It’s incredible to see fans sing along to the last song on Jackson Square like it’s our most recent single. One thing I’m most proud of is that we’ve never been accused of having a “boring” part of the set.

I just saw yesterday that you are doing a contest where 3 lucky people could have you performing at their house, how did this idea come about?

We’ve done a bunch of acoustic performances at radio stations and record in-stores, and I love the intimacy of just playing the songs with no microphones, soundcheck, or PA. Just show up and roll. I like staying nimble that way. But the idea of showing up at someone’s house and playing some songs only works because we have so much faith in our fans as people. In our experience Arkells-fans are fun, decent, cool and generally people we’d like to hang out with. We have a really nice fan base. We hit up three houses in an afternoon, and each one was equally different but awesome. Two of the places had keys for Anthony to play!

Last month, you released a cover of “Can’t Stop Thinking About You” by Tobias Jesso Jr, what made you choose to do a cover of this song?

I love piano-rock. Ben Folds, Elton, Billy Joel, Paul McCartney. Tobias’ record is so pleasing to listen to, and I wanted to put my own spin on the song. We have a little work space in Hamilton and we just banged it out in a day. I like fun little projects you don’t have to think too hard on.

Speaking of covers, what are your favourite covers to perform at a show?

Lately we’ve been doing Sledgehammer by Peter Gabriel and that song rules.

Earlier this year, you were able to perform with Sharon & Bram (of Sharon, Lois & Bram) at Indie88, how was that experience?

Who doesn’t love Sharon and Bram? Part of our collective childhood. Was an honour to be asked, and they are just as nice in person.

Social media has become a huge part of the music industry; do you feel that’s an important tool for all musicians to take advantage of?

Yeah – it’s a nice way to directly speak to people who are interested in the band. Cut out the middle man. Say things exactly the way you want to say them.  When it doesn’t feel like a chore, we have a good time with social media.

What’s next for the Arkells?

Just touring and working on more tunes. We’re always thinking about the next batch of songs…music is the nucleus of everything we get to do.

What up & coming Canadian bands are you currently listening to?

Our friend Terra Lighfoot just put out a new record and she’s a killer talent. Great singer and guitarist. So happy to see her busy and getting opportunities she’s so deserving of.

If you were able to put together a festival line-up, which other Canadian bands/ artists would you want to share the stage with?

We kind of got to do that this summer in London, ON…we got to play with Mother Mother, Tokyo Police Club, Born Ruffians. All bands we’ve admired and been pals with for a long time.

It would be really fun to do something with Tegan and Sara and Chromeo. I feel like it would be a good looking bill.

Bicycling to rec league sports. Nice to get out and be around friends. Lately I’ve been playing soccer and softball with my firmed and it’s a great time.

A little fro-yo with lots of toppings never hurt anyone

Thanks for rooting us on. We feel your love.  xo