Interview – Busty and the Bass 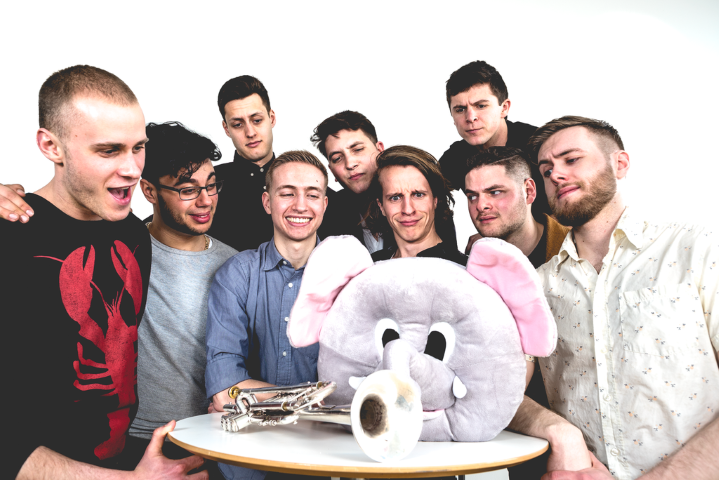 Montreal based band, Busty and the Bass is made up of nine musicians. The band won CBC Music and TD Banks “Rock Your Campus” last fall and have played four back to back sold out shows during Montreal Jazz Fest. Busty and the Bass released their debut album, “GLAM” on June 23rd via Indica Records and now I’ve had the chance to ask band member, Eric Haynes a few questions about their background, their music and so much more.

We all met at university – we were actually all studying music at McGill and during the first week of frosh we ended up jamming together at a party at our guitar player’s house. We had a lot of fun, and kept playing together. In our first few years we played a lot of house parties and really small shows, but even though the music and the atmosphere were both pretty sloppy back then, going through shows like that made us stronger as a band and as friends.

How did you choose the name “Busty and the Bass”?

When we’re talking between ourselves or to our fans, we usually just call ourselves “Busty,” but since all 9 of us are guys we’ve had to come up with a slightly different definition for that word. For us, being “Busty” means freeing yourself of your inhibitions and getting down. We hope that if we let go of feeling self-conscious and dance, the audience will too.

What would you say are the highlights of having nine musicians in the band?

Our backgrounds are very different – the nine of us are from all over North America – and because of that each person brings a different sound and style to the group. When we combine each person’s perspective, we’re able to create a unique and original sound, and give each person an important voice in the music. Travelling with nine people is also pretty fun; it’s like being with a party everywhere you go.

How does your writing process work with so many musicians?

Our songwriting process is very collective. Generally a song starts in a small group of 2-4 people who develop it to a certain point and then bring it to the rest of the group. As we move through this process of small and large group input, the song is developed and goes through revisions. We produce all the sounds ourselves, and write the lyrics and arrangements ourselves.

In 2014 you won the “Rock Your Campus” competition, and were able to open for Arkells, how was that experience?

It was great! We put a lot of work into the competition, but it was a huge surprise when we won. It really affirmed our belief in what we’re doing, and the publicity definitely helped us grow our audience in Canada. Opening for the Arkells was awesome too, it was great to hang out with them and open for them in front of a crowd of the McGill students who had helped us win the competition and supported us from day one.

Are there any other Canadian bands/ artists that you would love to share the stage with?

We’ve enjoyed sharing the stage with all the acts we’ve played with, from small local Montreal acts to our friends in other cities like The Pick Brothers, The Wayo, Kasador, KC Roberts and the Live Revolution, or Ripe. Personally, I’d love to share a bill with BADBADNOTGOOD, BRAIDS, or Kaytranada, but there are a lot of Canadian groups we look up to and we’ll have to see what happens!

You released your debut EP, GLAM, on June 23. How has the response been so far?

We’ve been very pleased with the response to GLAM. It was our first professional release and our real introduction to the world, and we wanted it to be as diverse as we are but still have a common thread that is undeniably Busty. We decided to release it for free to thank our fans for their support so far, and we hope it’ll continue to reach as many ears as possible.

What can fans expect next for you?

We have several shows coming up around Ontario and Quebec, and we’re planning a very exciting fall tour in September and October that will bring us out west for the first time – more details to come. We’re also in the process of working on our first album; we’ve already started to play some of our new material at our shows.

You have been playing some festivals through the summer! How do festival shows compare to a regular live show?

We’ve really enjoyed the festivals we’ve played this summer; playing outdoors feels great and we really feed off the energy of a bigger crowd.

Hmm, in addition to the bands I mentioned earlier, I’ve been really enjoying Milk & Bone and Patrick Watson lately.

Hedley at the Calgary Stampede! It was an important Junior High School experience.

Think back, what was the first song you ever performed in front of others?

Bach’s minuet in G… it was at my first piano recital and I was super nervous.

Anything outside! We’ve been keeping a Frisbee and a soccer ball in our tour van, so there’s been a lot of that, but I really enjoy running too.

Ice cream! But frozen grapes are dope too.

If you had to choose one album to listen to for the rest of time, which would you choose?

Right now, it’d have to be either Kendrick Lamar’s “To Pimp a Butterfly” or Donnie Trumpet and the Social Experiment’s album “Surf.” I haven’t stopped listening to either of them since they came out, and they’re still fresh every time.

“In The Midst Of It All” by Tom Misch. I hadn’t heard of him until a couple days ago, but the production and the guitar solo on this track have me pretty sold. https://soundcloud.com/tommisch/tom-misch-in-the-midst-of-it-all-feat-sam-wills

Thank you for all your support! YOU are the reason why we do what we do, and we can’t wait to continue to meet you and play for you.