By Jordyn Armstrong on August 6, 2015@jordynhannah95 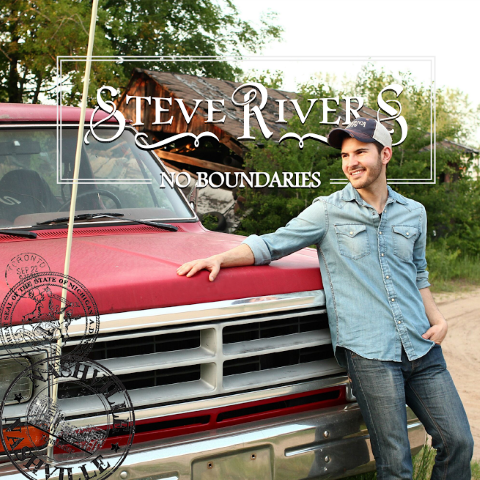 Canadian country singer, Steve Rivers has been making a name for himself across Canada and the United States. With one album already under the belt, he’s releasing his second, “No Boundaries”,  on August 21. Rivers has worked with some big names in country music after moving to Nashville, like Frank Myers, Danny Wells and Tim Taylor.  He and his band (consisting, in the states, of Eric Ellis, Mat Churchill and Adam Newton) are some that bring it all to the stage. To find out more about this Canadian country idol, check out this interview we had with him!

What can you tell us about the album?

It’s finally done, lol.  It took over a year but we finally made it through and I’m happy with it.

What would you say is the biggest influence, topic and theme of this album?

I named this album ‘No Boundaries’ because I feel like over the last few years I’ve been trying to overcome certain limitations in my music career and in my personal life.  During the course of making this album I think I’ve broken down a lot of those barriers, but I still have a lot ahead of me.

Do you think you have changed at all since you released “Temptations”?

Oh yeah.  I wrote a majority of Temptations (and recorded that album) in my early 20’s.  I’m 28 now and married and I look at situations a lot differently.  My perspective on life has matured (somewhat lol) and my priorities have shifted.  I also think I can look back on certain times in my life with different eyes now and evaluate those experiences differently.

How do you feel that is reflected in “No Boundaries”?

There are certain tracks on this song where I intentionally went back to some experiences in my past to draw on specific emotions.  Now that I’m older it’s harder to tap into those emotions and try to feel the same thing as I did then because I’ve moved on from that time in my life.  I think that’s a good thing as a songwriter because I can look back at experiences with a clearer  vision and sometimes be more practical and a little detached.

Do you feel you went beyond any boundaries making this album?

I tried not to be confined by creative barriers like time, always wanting to be in control and my fear of “not doing things the proper way”.  I think I started to get caught up in the idea that in order to make an album I have to go through this check-list of ‘must-do’s’ in order for it to sound a certain way  which is absolute nonsense.  I had to stop thinking that way and let go of the reigns a bit.   The biggest thing was not putting a hard deadline on the project – I took my time to make this record something that would stand out once released.  Dan Brodbeck was a huge help in that.  As a producer he knew what I was going for and helped me find that balance between sounding current while creating my own sonic stamp – my unique sound.

What is it like moving from Canada to the States and being able to work with some of the biggest names in country music?

As an artist you have days where you can’t see past where you are and wonder if you’re on the right path, and then you have those days where you’re opening for acts like Gregg Allman at a major music festival saying to yourself “I can’t believe this is happening right!”  I don’t take it for granted and feel very blessed to have those opportunities.

Living between 2 countries has always been one of my biggest boundaries, and even though it’s been frustrating at times I totally respect the legal situation surrounding it.  I respect both the US & Canada’s visa policies and feel very privileged to be able to perform in both nations.

Do you have any plans of touring more once the album is released?

I hope so – my last summer (2015) date is Labor Day and then I’m taking the month off.  I’m hoping to play some Fall shows in mid October and line up an album promo tour in early 2016.

I try to keep it fun and energetic.  I create a set list, rehearse with the band, but when we get on stage I just feel the crowd and if we gotta make changes on the fly we’ll do it.  Whatever keeps the energy moving, that’s my policy.  People are paying good money when they come hear us and I wanna make sure they have a great experience.

As a Canadian Beats tradition, we like to ask the artists some fun questions.

As a Canadian living in Nashville, do you often get laughed at for any particular Canadian stereotypes?

lol yes – I say “restroom” a lot and people look at me weird.

If you could plan a dream tour with any other artists/bands, who would you bring along and why?

Tom Petty, Eric Church, Chris Stapleton, Kasey Musgraves, and the Wild Feathers.  I would open the show (probably in the parking lot – lol)  then get sit back and watch an amazing show every night!

Where would be your dream place to tour, given the chance?

Do you have anything else you would like to say to the fans?

I keep recording my songs because of the overwhelming encouragement I continue to receive from my fans.  I have fans that have been with me from the beginning and I am forever grateful to them.  It’s also so exciting to meet new fans at shows who’ve heard me for the first time and really enjoy my songs and  what the band & I do.  If I can connect to someone through a song or make someone’s day better during a show then that makes it all worth it.  Thank you to everyone who has and continues to support my music and spread the word, I truly appreciate it!