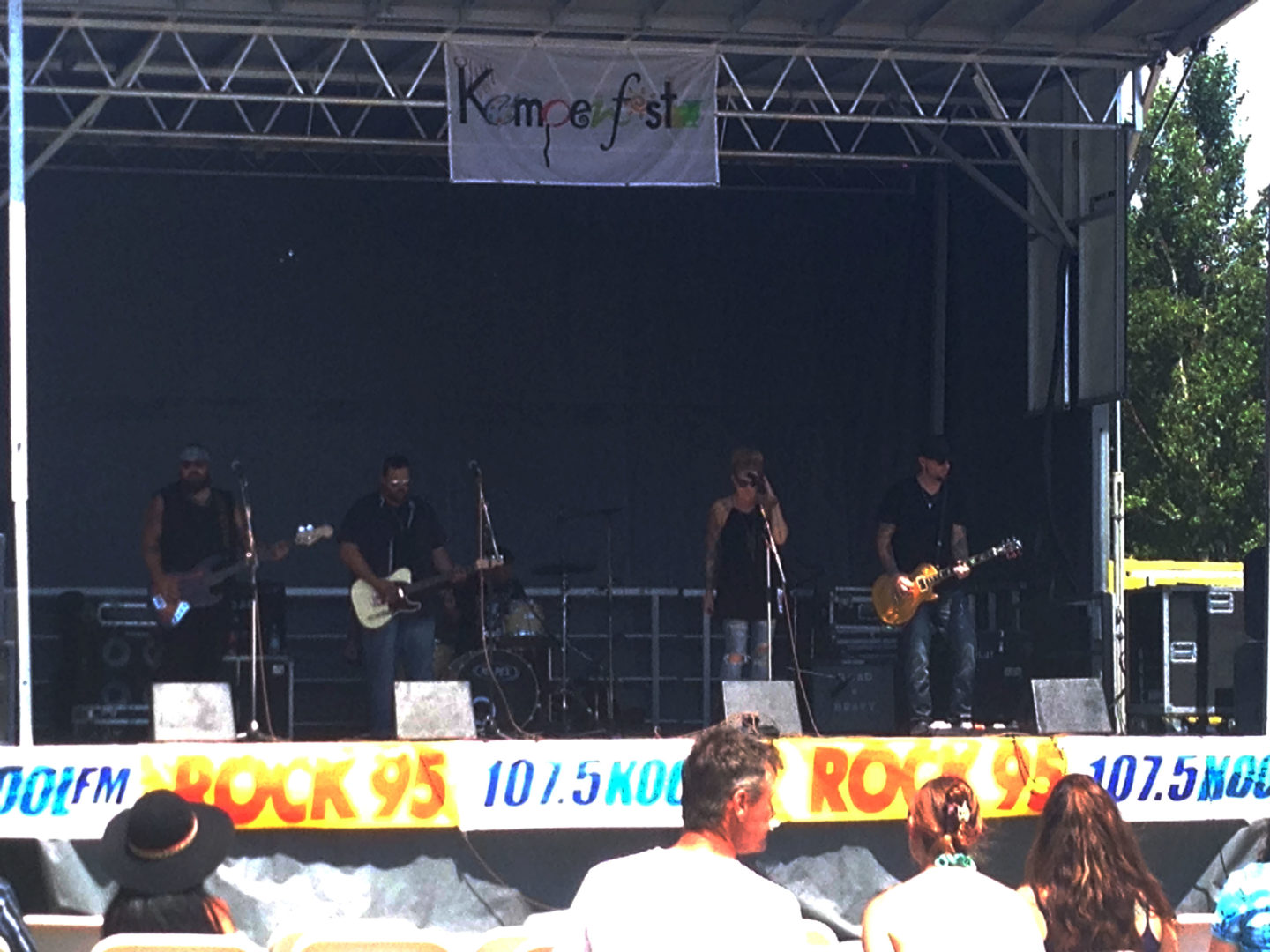 Rock ‘n’ Roll and summertime.  Some things are just meant to be paired together.  The Road Heavy served up some “southern-fried” comfort to the crowds at Kempenfest that kindled the feeling that we were at a tailgate party, complete with exhaust fumes, football, and drinks chilled on ice.

I also sat down with the band after the show to discuss the gears that drive this band and what their future holds.  The hard rocking, Aurora, Ontario based band consists of Pat Mete (lead vocals/guitar), “Sweet” Jules Cardoso (lead vocals), Ryan Blake (lead guitar), Andre “Big D” DaSilva (bass) and Jeff Cox (drums).  They performed a set list of nine songs, included six of their own and three covers.  Off of their new EP, The Devil’s Grin, released on iTunes in May, they played Feels Like Rain, Get My Gun and crowd favourite Cold Blank Stare.  The song provides a mix of complicated and seductive guitar riffs and powerful, ‘in your face’ lyrics.  Mete described the inspiration for the song as “Karma.  If you listen to the lyrics in the chorus, it just basically says like it doesn’t matter what you do in this life, at some point you are going to pay for all the shit you did.”  The soundscapes at this show had a captivating thickness.  The band made their presence known as these stirring anthems thundered into the hot, humid air. 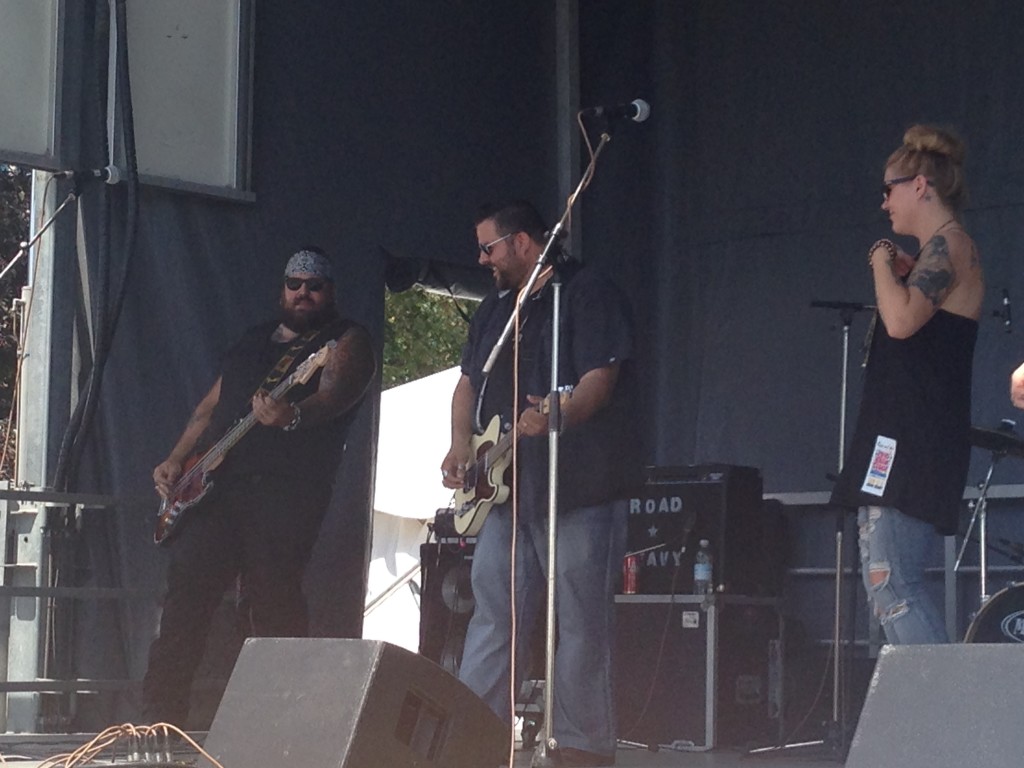 The set also included a few new songs; Don’t Give a Damn, Whipping Post, and closing the concert was the song Your Place or Mine?  Mete shared that they are hopeful that Your Place or Mine? will be the next single, once it finishes with mixing and mastering.  Channeling musical influences from rock, country and blues, these new songs gave the crowd just a taste of what is to come.  Self-assured with firecracker drums, fat bass lines, hypnotizing riffs and soulful vocals, the band demonstrated that they are successfully adding to their toolbox.  Whether it be in the form of another EP or an album, Mete says fans can expect them to be released in the Spring of 2016, along with a tour at the same time. 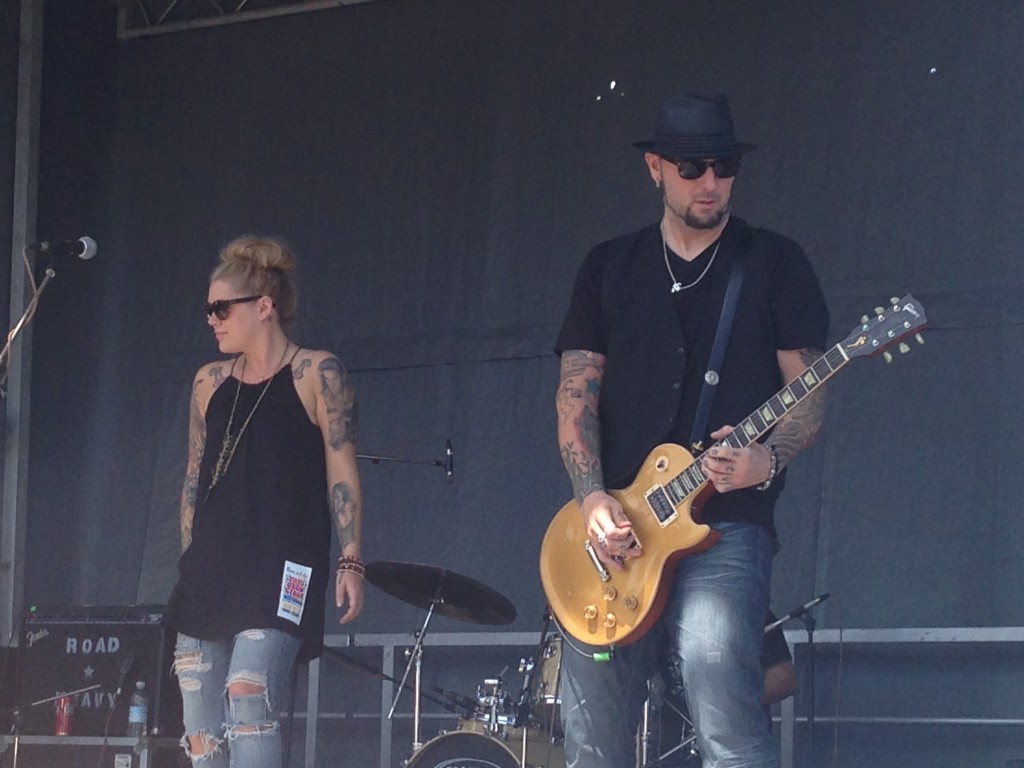 All fingers pointed directly to Mete for being the initial source of both the music and lyrics, when asked what goes into the making of a song.  Blake also added that each song is created a little bit differently.  “Most times it’s Pat that comes up with a melody and a few chords with a song idea then we work on it, or, it sometimes comes from a guitar riff idea, then we put chords and work on it”.

The Road Heavy has gained lots of exposure since winning Barrie radio station, Rock 95’s, Local and Loud competition in April, 2015.  This ‘battle of the bands’ styled competition awarded The Road Heavy with a recording contract, featured airplay, a music video package and the chance to open for a headlining act in the future.  Blake added that it’s been great winning the contest and the resulting support they have received from Rock 95.   “People have been going crazy over The Road Heavy every time the band plays anywhere.”

What does the immediate future hold for The Road Heavy?  In September, they will be hitting the roads to the East Coast of Canada for a multi-city tour.  After that they will be focussing on more writing and recording for their upcoming future release.

If you have not checked out the band yet, come join this tailgate party.  The Road Heavy is dishing out a welcome addition of Southern rock songs that will have you rocking out all summer long.