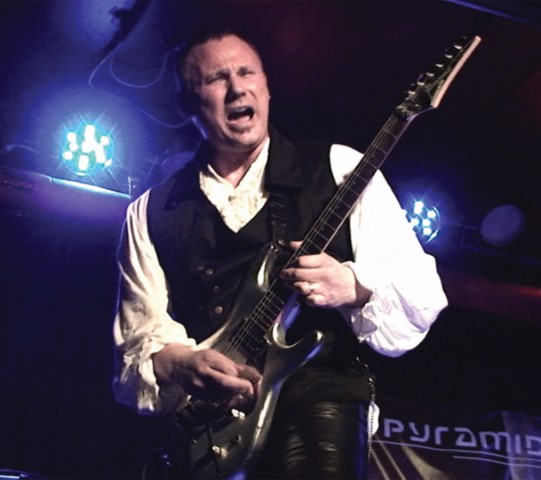 Kevin Estrella is about to hit light speed with a new, out of this world progressive instrumental project called Pyramids On Mars. Indeed. “Echo Cosmic” has just landed, and after making first contact, I was lucky enough to speak with the Martian ambassador to ask him about this strange cosmic anomaly, and find out if they come in peace.

So give me a brief history on the project?

Pyramids on Mars was born January of 2011 (The Age of Aquarius) (aka the age of enlightenment).  I released my first debut CD in 2013 and have been turning heads since then.  Pyramids on Mars is best described as Music from the Mystical Red Planet.  Melodic Instrumental Rock.  I am the “Joe Satriani of the North”. I am very influenced by Joe Satraini, style wise.  After hearing Surfing with the Alien back in the ‘80’s back in 1987 I knew exactly what I wanted to do and become.  Thus began years of practicing.   His approach to instrumental rock was what I knew I wanted to do.  Thus began years of practice.  The whole concept of Pyramids on Mars embodies all my influences, and my passion for aliens, UFO’s, and the alien artifacts that are scattered throughout our solar system.  Pyramids on Mars actually do exist.  And through my music I am hoping to peak people’s interest to do their own research and find out the truth for themselves.

Where did you get the inspiration to make a space themed album?

The concept for Echo Cosmic just came together.  A lot of music was written for this CD that all had a common theme.  That being each song was influenced by different artists.  Many songs pay homage to some of my favorite bands.  I envisioned the Echo Cosmic theme and everything grew from that.  My music is very space themed.  I use a lot of analog keyboards like the Minimoog and Oberheim Polyphonic.  Predominant of bands like Rush and Pink Floyd what they used in the ‘70’s.  Their sound just resonates with me.  And sounds like something you would hear if you landed on Mars and looked around.

I heard that this is a solo project; does that mean you played everything on the album?

That is correct.  I play all guitars, bass, keyboards, and do all the drum programming.  In fact I produced, engineered and mastered the entire album as well.

What were some of your influences?

I get asked this a lot.  There is a pyramid (no pun intended) of influences broken into 3 quadrants.  At the top are guitarists David Gilmour, Joe Satriani and Jimi Hendrix.  My musical voice, my spirit/soul resonates with their energies.  And a lot of technique too.  The second quadrant below them are my biggest Inspiration, being Baroque composers J.S Bach and Antonio Vivaldi.  My playing style, classical theory, and melodic phrasing comes from them.  I came from the school of Yngwie Malmsteen.  I studied Malmsteen straight for 2 years to learn his style.  But I did not want to become another Malmsteen clone.   I wanted to think like him.  Thus you need to go back to his influences.  That is when Bach and Vivaldi changed my life, and my approach to guitar.  I think of the guitar more like a violin.  And the melodies and fingerings I play are more like what a violinist plays.  Same with Malmsteen.  Understanding this concept helped change how I envision sounds and organization on the instrument.

The third bottom and largest quadrant of the pyramid of influences is all the bands that influenced me.  Just to name some, Iron Maiden, Rush, Metallica (pre black album), Megadeth, Ministry, NIN, Led Zeppelin, Pink Floyd, Tool, Extreme, and last but not least Meshuggah!!!  Meshuggah are my favorite metal band right now.  There are many others, but for the Pyramids on Mars sound, you will hear all these influences.

Can you tell me a little about the recording process?

The funny thing is, it is almost like I don’t write my own material.  It is like it comes from somewhere else.  Often I find myself more of a medium and the music is just flowing though me from the cosmos.  So often I feel like a painter, with a canvas of a pencil sketch.  And then I am just there with my colors and it is like painting by numbers.  Before I know it, the song is written and done.

Some of my songs actually came in dreams.  The song Dream Division came in a dream.

I have my own studio, and I have a lot of studio experience.  I do a lot of self educating.  Having a good ear is also important. You want to be able to hear every instrument in the mix. And sometimes when you have multiple tracks, you use your ears to find a hole in the frequency spectrum to make things cut through. I also use other bands recordings to give me ideas as to what I want to hear with each song. For Echo Cosmic, I used Metallica’s Master of Puppets as a sound I wanted to try and recreate. It all started with getting a really good thick rhythm guitar sound. A sound that made the speakers move a certain way. Very warm sounding. Everything else was built upon that as a foundation.

Is there some sort of message, cosmic or otherwise on the album?

To summarize, the overall story line of ‘Echo Cosmic’ is about mankind’s history of broadcasting radio and TV signals for over 100 years from earth to space.  Theoretically, some of these signals should be picked up by alien civilizations.  We are announcing our existence through this cosmic echo we are sending out.  We may be an insignificant species in a vast universe, but we are leaving a footprint that has infinite influence.

Is there any future plan to tour in support of the album?

I play a lot in Toronto and Hamilton.  I just opened for Felix Martin (who opened for Steve Vai) his last tour in February when he came through Toronto on his North American tour.  As Pyramids on Mars gains popularity there are plans for touring and supporting Echo Cosmic.  Right now, because I am a solo artist, I wear a lot of hats.  I am my own manager, marketing department,  promoter, media/press relations.  I probably spend 90%  of my time wearing all these other hats  instead of  playing or writing.  If I put in 5,000 hours creating Echo Cosmic, you can do the math to figure out how much time I spend on the business side of music.  Most of my time is spent doing radio and magazine interviews.  I would rather talk in front of millions (which I do regularly), then play a small club for a few dozen people.

When can us earthlings get our grubby little paws on this alien masterpiece?

Echo Cosmic is available now as a Pre-Release!  Currently only $6.99.  You can order it  on our website @ www.pyramidsonmars.com .  BUT you will have to hurry, because as of Sept 8th 2015, it goes back up to regular price!!  Visit the store while you are there.  We have T-shirts, hats, posters and coffee mugs.  Really cool and inspiring swag \m/\m/

What are your thoughts on alien life? Do you think aliens would be hostile or friendly?

You asked the most loaded question of them all my friend.  Aliens are very real, they have been here a long time, and they are trying to help us raise our consciousness to the next evolutionary stage.  How do I know this?

I AM AN ALIEN CONTACTEE.  Aliens have been in direct contact with me.

It all started.  August 21, 2014, I saw a craft flying over my city of Hamilton.  It was an orange/red,  two-dimensional disc streaming with plasma.  At first I thought it was a meteor.  But it was moving too slow.  When I say two-dimensional, what I mean is it had the same dimension as a solar eclipse.  Which looks like a hole in the sky.  That is what this thing looked like.

I filed a report with MUFON and they investigated it.  I attended the Alien Cosmic Exhibition in Brantford ON this year.   It is where the top Ufologists from North America were doing presentations all done by pay-per-view.   I found out MUFON was doing a presentation.  It happened to be they were including MY sighting.  They said it was one of the most credible sighting they had in Hamilton.  But the funny thing was, I WAS THE ONLY ONE WHO SAW IT.  I later got confirmation that according to the UFO databases, there was no report of a UFO the night I saw it.

I was confused and bewildered.  It is impossible that I in a city of 500,000 am the only one to see this large craft fly over the city.  I met with world respected Ufologist Grant Cameron.  We had a private meeting.  He told me that what happened to me for me to be the only witness to a UFO sighting was not uncommon.   The same thing happened to John Lennon in the City of New York.  Same thing happens to countless others just before an abduction.  The aliens can islolate who they want to see them.

Now Grant has done extensive research into the UFO/Alien phenomenon and its connection with musicians.  Many musicians are alien contactees and getting musical downloads from somewhere else.  Aliens are trying to get their message across through the help of musicians.

I feel I am to raise awareness, and raise consciousness to the next evolutionary stage.  Enlightenment, ESP, telepathy, I don’t know all the answers yet.

What’s next for Pyramids On Mars?

All my time is spent promoting Echo Cosmic.  I expect to be doing that up into springtime.  I am always networking and growing.  Most of my contacts are made through Twitter.  I grow by 5000 new Twitter followers a month.  When I was working my day job I spent a lot of time in business development, networking and sales.  All of these skills are what I use with my music career.   I read DIY musician articles every day.  I know how to succeed, how to get there.  I think I have an edge over many other musicians when it comes to these skills.  I am now actually getting endorsements for products I have developed.  I am very business savvy.  In this business it is 10% musicianship, 90% marketing and networking.