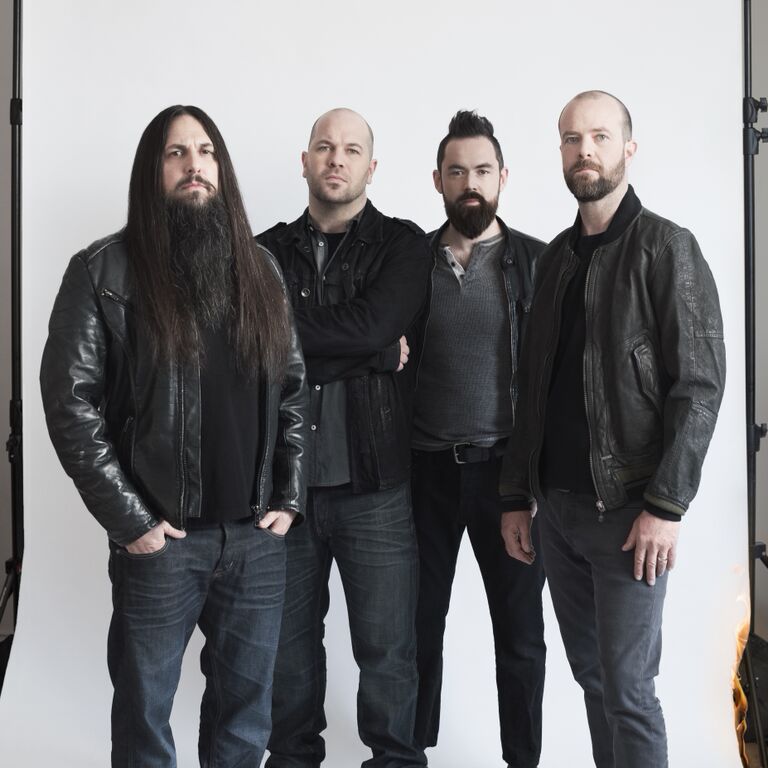 One of Canada’s biggest rock bands, Finger Eleven, is back. On July 31, the band is releasing their sixth studio album, Five Crooked Lines. It is the follow up to 2010 album, Life Turns Electric.  The album is already available for preorder on iTunes. With the preorder you get the singles, “Gods Of Speed”, “Wolves and Doors”, and “Five Crooked Lines”. We got the chance to talk with vocalist, Scott Anderson and find out more about what they’ve been up to!

What have the last five years been like for the band, since the release of your last album?

The last 5 years have been pretty great. Well, stressful and great at the same time. We’ve been home for an extended period of time. That kind of time at home makes you feel nice and normal. ha.

We had a few big changes in the last while. We had a label change and a member change among other things. Though we never really stopped writing throughout that time.

Why did you take so long to release another?

The material for the record kept getting stronger as we missed deadline after deadline. So after a while we just said “Eh, what’s another missed deadline? Let’s keep going until we get it right”.

What was the writing process like for Five Crooked Lines?

Typically James and Rick will get a musical idea together, then I’ll put some lyrics and melody over it. At that point when we have enough song ideas we’ll usually book a cottage and bust the songs open to try and improve them.

How does it differ from your previous albums?

This album sounds more raw, I suppose. We tend to try and achieve studio perfection… or our version of perfection anyway. (producer) Dave Cobb wanted to capture a much more “live” sound. It was definitely the right approach for this record.

Do you have any favourite songs off the album?

I like “Gods of Speed”, “Criminal”, “Sensory Eraser”. This is a gross answer, but I really do like them all.

Is there anything you would change, looking back at it?

The record came out really well, but if you gave me a few more vocal takes, I’d love to use ’em. I should know better, honestly. I won’t improve the vocals. They’ll just be “different”. It’s always a strange feeling to finish a record…kind of tough to walk away.

What is the writing/recording process usually like for you?

I have the privilege of getting music from the guys before I start writing. So a lot of inspiration comes from the actual music.

Have you played any new songs on tour? If so how have the fans responded to it?

I’ve played a lot of new music to a lot of audiences over the years. The reaction to the new stuff has been the strongest we’ve seen in a long time. The feedback has been really encouraging.

Speaking of tour, you’re covering a lot of ground on this one. Is there any place you wish you could have added to the tour?

Go ahead and add any place that wants to see us play. That’s the town I’d like to go to. ha.

What is your favourite part about touring?

The actual concerts are great, obviously. But the incidental hangs with the band and crew are pretty sweet. Because it’s so much harder to get together back home, hanging out and having a few beers and making stupid jokes is starting to feel downright special. I don’t take that time for granted anymore.

What is next for Finger Eleven?

Touring.. Trying to let the planet know about our new record for as long as we can.

At Canadian Beats, we have a tradition of asking fun questions at the end of each interview:

What is one thing fans might not know about you?

After being together for so many years, do you feel you know everything about one another or are there still surprises?

If there are any  surprises left, I’d be surprised..

Are there any bands you still idolize and would like to tour with?

I’m super awkward around people I admire. So I’d probably be a wreck on some dream tour with Clutch or Led Zeppelin or whoever. Ugh. Cringing just thinking about it.

Thank you for any kind of support that you’ve ever given this band. You made my dreams come true, dang it. Just…Thank you.