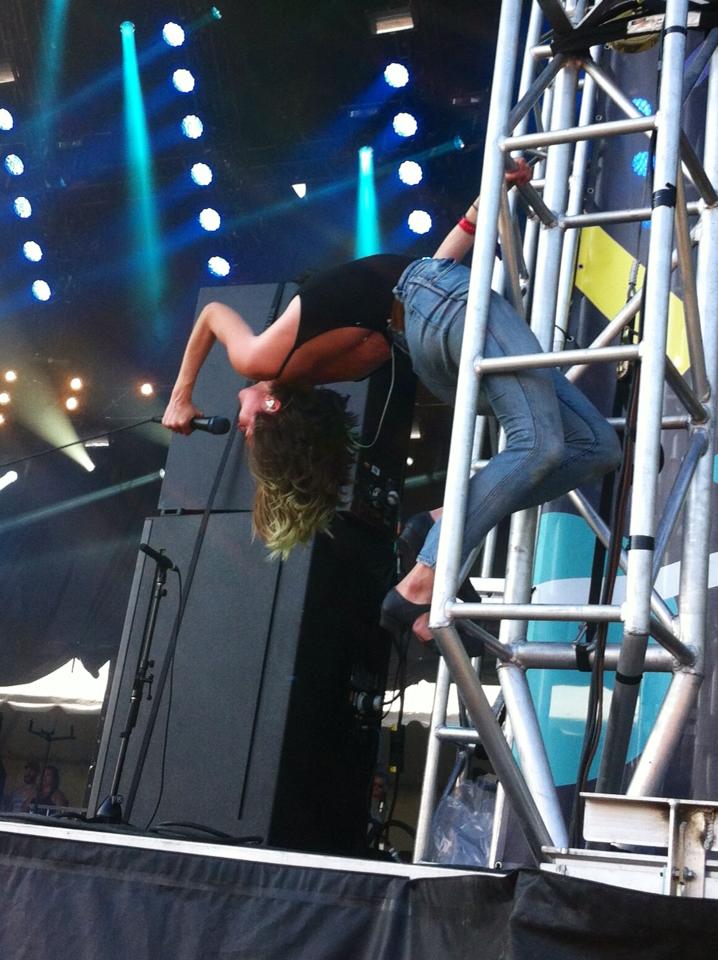 Who: July Talk
What: Wayhome Music and Arts Festival
When: July 26th, 2015
Where: Oro-Medonte, ON

Despite the sweltering heat on a sunny Sunday afternoon, a massive crowd surrounded the WayBright stage at the first (of hopefully many) Wayhome Music and Arts Festival, anxiously waiting for July Talk to begin their set. When they emerged on stage amidst a flurry of chants and cheers from the crowd, I quickly learned that I had absolutely no idea just how awesome this band is. Right off the bat, the on stage chemistry between lead singers Peter Dreimanis and Leah Fay grabbed attention and refused to simmer down throughout the whole set. My first thought was: these guys are freaking weird, and it’s awesome.

It’s safe to say that July Talk has one of the most unique forms of stage presence that I have ever seen: full of jokes, hair pulling, screaming, climbing, general insanity, and some…suggestive gestures. Fay’s composed confidence and subtle playfulness on stage created an interesting juxtaposition to Dreimanis’ jerky, energetic movements and the two combined formed a balanced and exciting performance that only July Talk could deliver.

Right away Fay engaged with the crowd by moving off the stage and getting up close and personal with the audience after politely asking the security guard to carry her there. The shenanigans didn’t end there as she later lay down on the stage and began to play with the same guard’s hair, all while somehow effortlessly hitting every musical cue. This escalated into a wet t-shirt contest that got male members of the audience and the security guard up on stage to participate in dancing and getting soaked, with each winning a kiss from Dreimanis.

Aside from all the joking and mischief, every song was expertly delivered and professionally performed. Opening with Gentleman, Dreimanis stated that this song was about shitty men and strong women, which received loud cheers of approval from the crowd. This song is a pretty mellow number, beginning with a minimalist guitar riff and slow, but heavily accented beats. The interplay between the gritty, bluesy vocals courtesy of Dreimanis and Fay’s delicate, bright sound worked together to perfectly propel the message of the song forward.

A few songs in, July Talk performed their hit Guns and Ammunition and encouraged the crowd to sing along with them, which got everyone excitedly “hoo-hoo-hoo”-ing along. This is another seemingly mellow song, but slowly picks up as the bridge builds to the end of the song with Dreimanis’ rough vocals powerfully accenting every word, while the rest of the band contrasts with light, upbeat oohs. The band also performed a couple of new songs and announced that they will be returning to the studio soon to finish recording a new album before closing their unforgettable set with The Garden.

Final verdict: July Talk is insane and you definitely need to see them live at least once, but preferably several times over and over again.