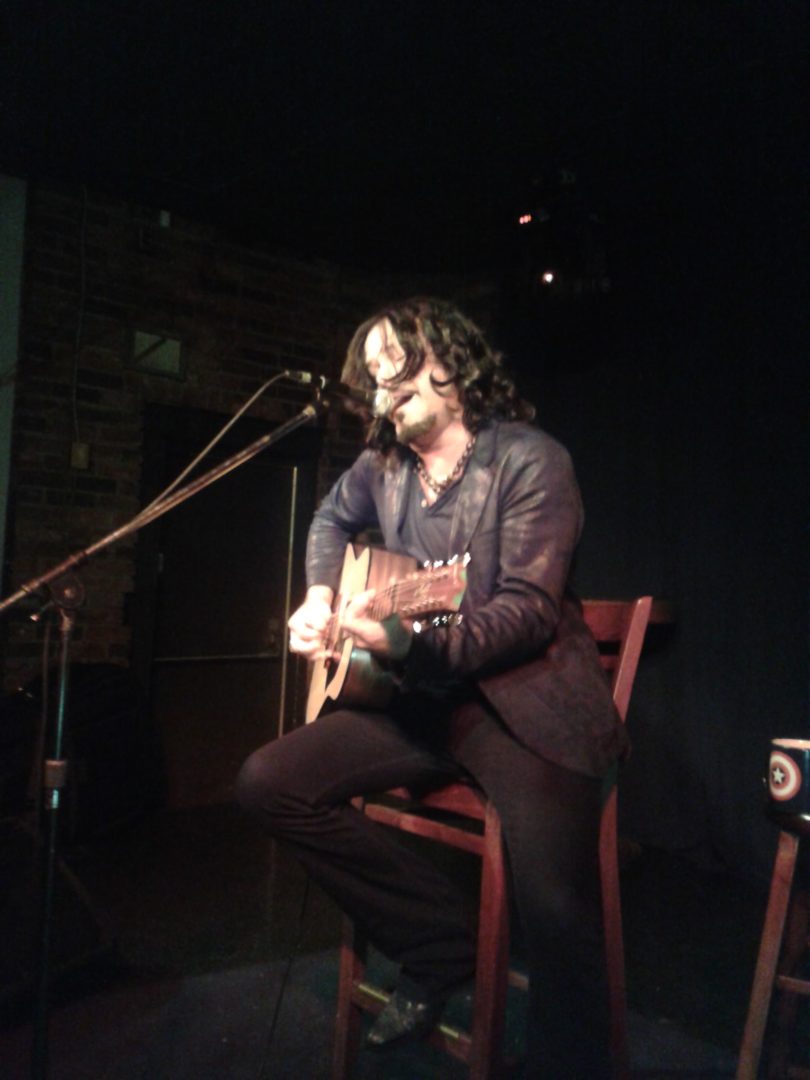 Who- Jeff Martin lead singer of The Tea Party
What- Jeff Martin Solo Show with Guests
Where- Hamilton, ON @ The Corktown Pub
When- July 24, 2015

On Friday night I had the great pleasure of finally seeing Jeff Martin do a solo gig.  I’ve seen him play with The Tea Party many times, but this was my first time for a solo show. Jeff’s awesome looking pedalboard boasted a sign that stated “Do not move, and no drinks near”, maybe alarms would sound if anyone were to get too close!  He had a really awesome line-up of openers, probably the most openers I’ve ever seen at a show.  I love seeing bands I’ve never heard before, so this was a true treat for me.  The first band to go on was The Retroaction – who played a set of their own tunes mixed with some great covers, they had some great energy to get the crowd started up for the night.  Then we moved on to The Black Suit Devil.  This one for me was intriguing, with Andy Du Rego’s raspy vocals and heartfelt acoustic guitar.  The lyrics in his music are true poetry, and I will be purchasing his newly released EP.  He had a lovely backing band which included Wesley – Collett Taylor, (upright bass) Neil Cameron (violin), Jenny Robert (backing vocals). 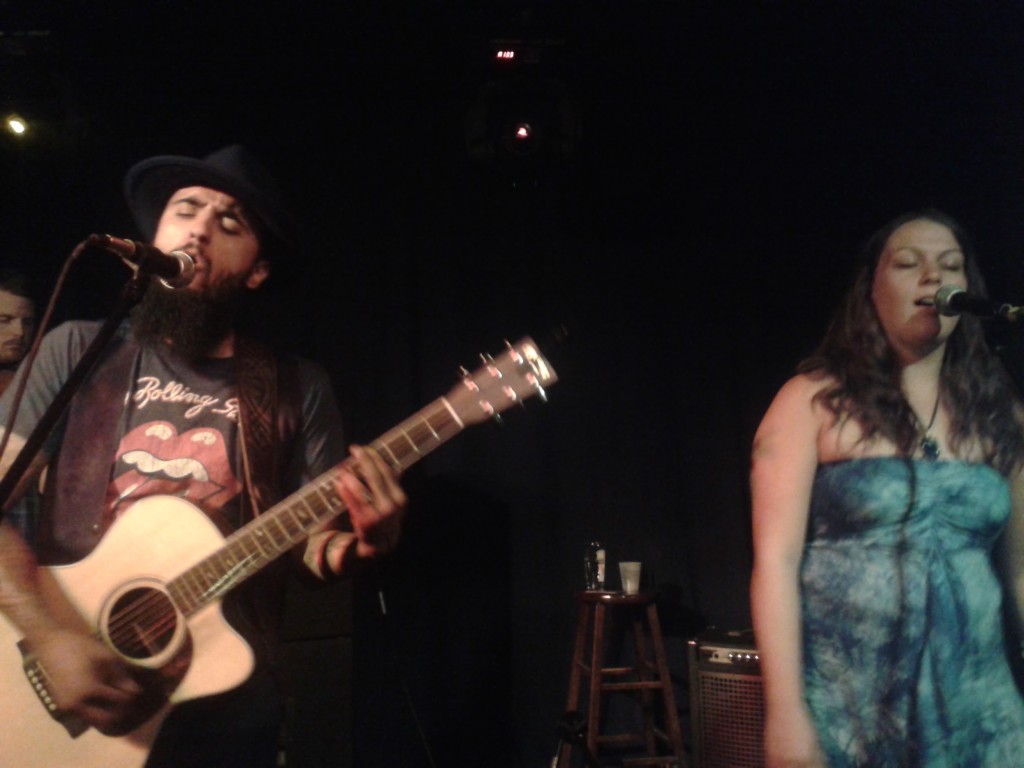 The Road Heavy was up next, this band just blew me away.  I don’t know what I was expecting but wow, their heavy blues inspired sound made me fall in love.  They are also the winner’s one of our local radio stations Rock 95’s Local and Loud contest, and they certainly deserve it.  With wicked guitar, and truly beautiful vocals this band is going to make some waves out there.  Their set was a little more acoustic than they would normally showcase, so I’m looking forward to seeing them again with their full set-up. Members are: Pat Mete, Jules Cardoso, Ryan Blake, Andre DaSilva, Jeff Cox. They are playing a show at Kempenfest in Barrie, ON, Sunday August 2, 2015. 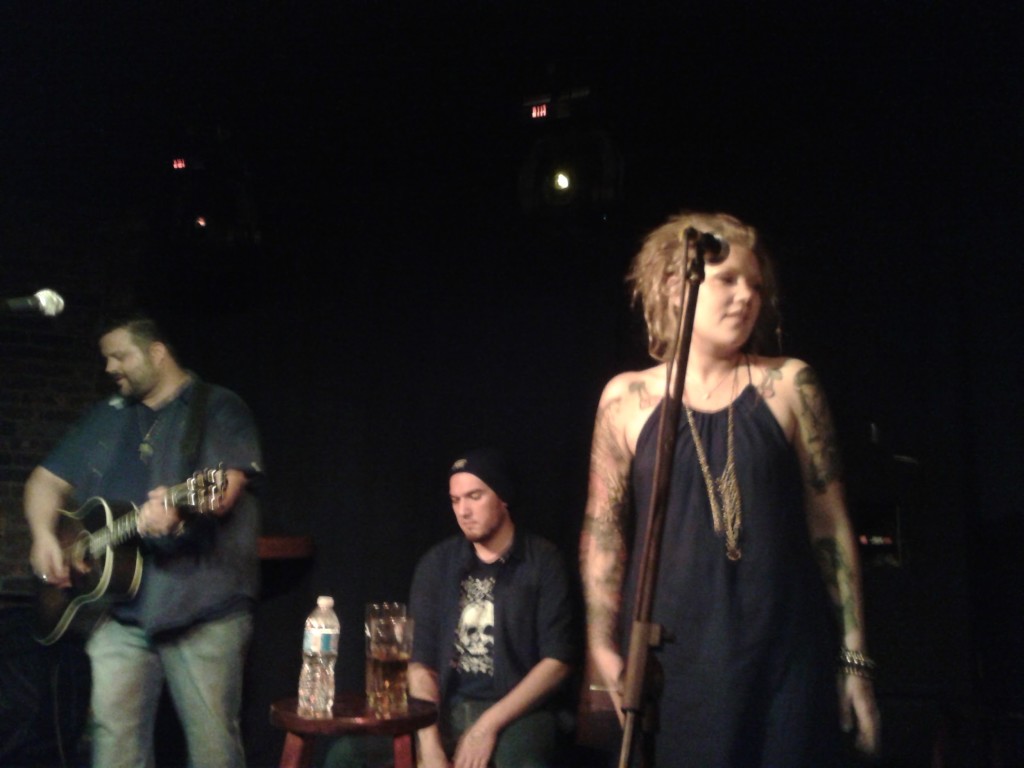 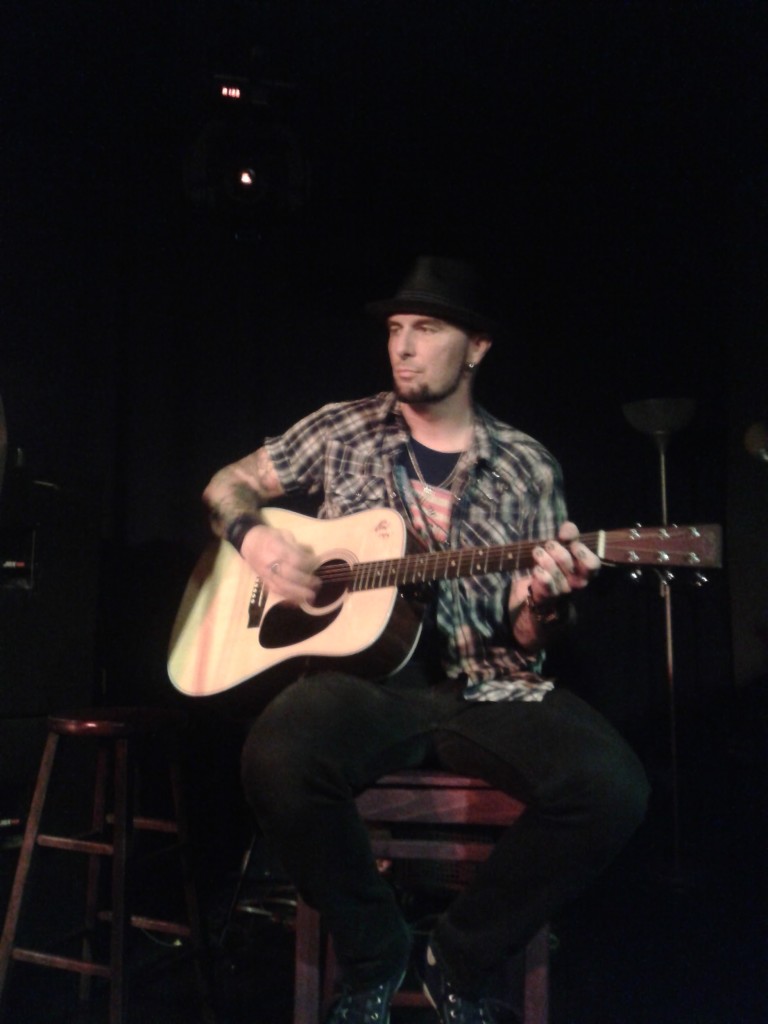 The next band to grace the stage was In My Coma.  This is another one I had yet to hear, and they were great too! They had a more mellow sound to their music, I think their name suits them well.  I almost felt like I was in a dream listening to the smooth sounds.  The lead singer has a sweet, gentle voice, it’s as if he is floating on a cloud when he sings.  This band reminds me of a band I loved a long time ago- The Catherine Wheel, with the melodies and the haunting sweet vocals.  They do have some heavier songs, but they still manage to hold onto that dreamlike feeling even in those ones. They are doing some recording now, so I am looking forward to hearing more about that. Members are: Jasper James, LauraDoll, Mike Paterson and Lindsay Clark. 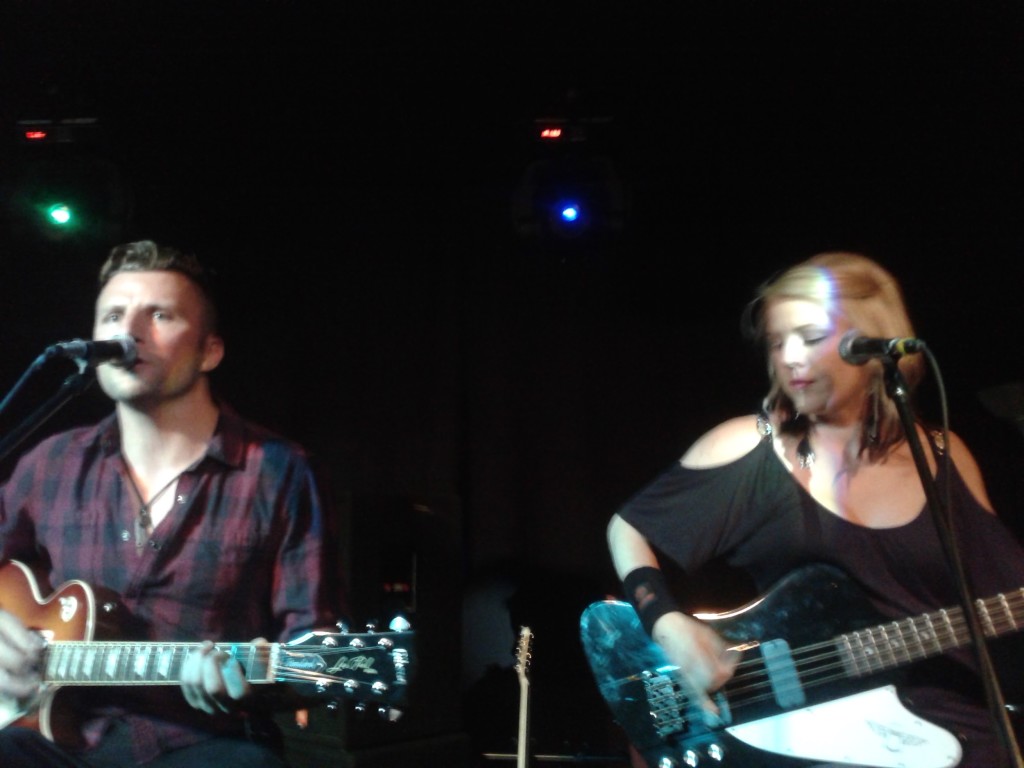 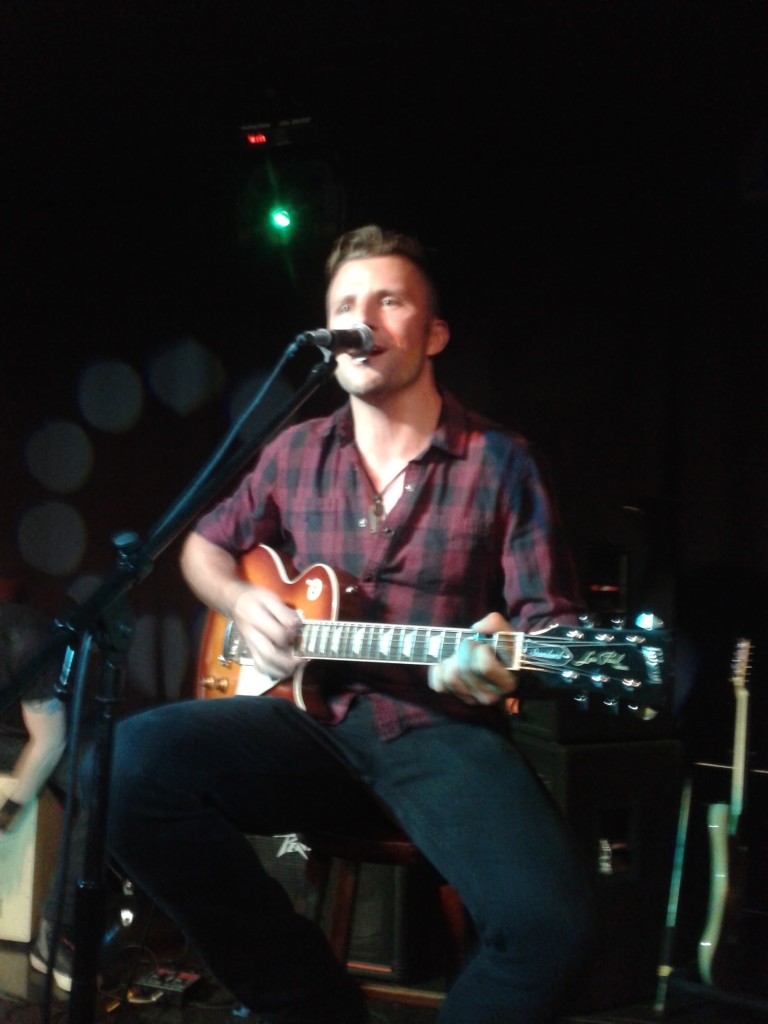 Ryan Blake of The Road Heavy got to be Jeff’s guitar tech, which from what I hear is not an easy job with all of Jeff’s crazy alternate tunings that he uses! Jeff came on stage just after midnight and played until about 1:30am.  He came onstage from the side door, Ryan handing him his guitar as he came on.  The audience erupted with cheers and he exclaimed “Don’t clap yet!”. His set was considerably louder than the previous ones, as he attacked his acoustic guitar.  He started off with Stillwater.   His emotions get me everytime when he is on stage, and he has this ability to make you feel so deeply.  After playing “The Maker”, he stated after the roar of applause “Well I did not expect this!”, and went on to say “So guess what? Apparently I’m old, I know I don’t look it but… I play with this little three piece band from Canada, and it’s going to be the 20th Anniversary of our album The Edges of Twilight”.  This fall The Tea Party is going on a tour in support of one of their most iconic albums, so check it out, you won’t want to miss those concerts!

He also dedicated the song “The Requiem/Hurt” to his “Little Brother” back in Australia, and it was such a heartfelt dedication.  The control he has over his voice is just astonishing, and you see it even more so when you get to be this close to the stage! I love that he does covers and will often mix several songs together in one.  He included a few covers into his songs throughout the night, such as (but not limited to) bits of “Hurt”, “Love the one you’re with”, “Stairway To Heaven”, “All Along the Watchtower” and a “Whole lotta love”. 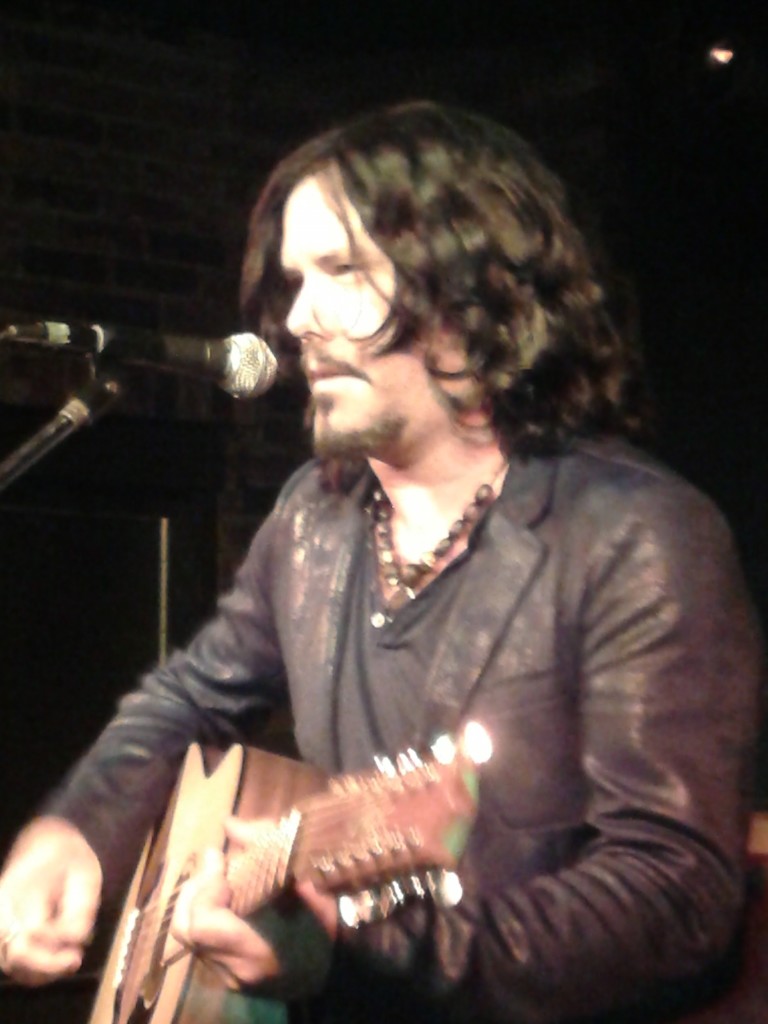 As an intro to “I love you/The Messenger”- he stated “So Here’s a Story, I’ve been a Rockstar blah blah blah for 25 years, and I’ve been a very bad boy.”  He goes on to say “He’s been blessed to sing his way out of it”. This is no doubt such a beautiful song, and he is right about one thing- it will melt any woman’s heart.

During his “Sister Awake/Save Me/Love the one You’re With” compilation the audience got right into it and began clapping along.  At one point during the show Jeff was stomping so hard that his tea almost went flying off the stool, but thankfully someone rescued it before that happened.

For his encore he played “Black Snake Blues / Whole lotta love”, watching Jeff play the blues is a beautiful sight, and this song just blew the roof off the Corktown Tavern.

Overall this was probably one of the best shows I’ve seen in a awhile.  I enjoyed all the openers, and although this was the latest I’ve been out of the house in a long time, I had the BEST evening.