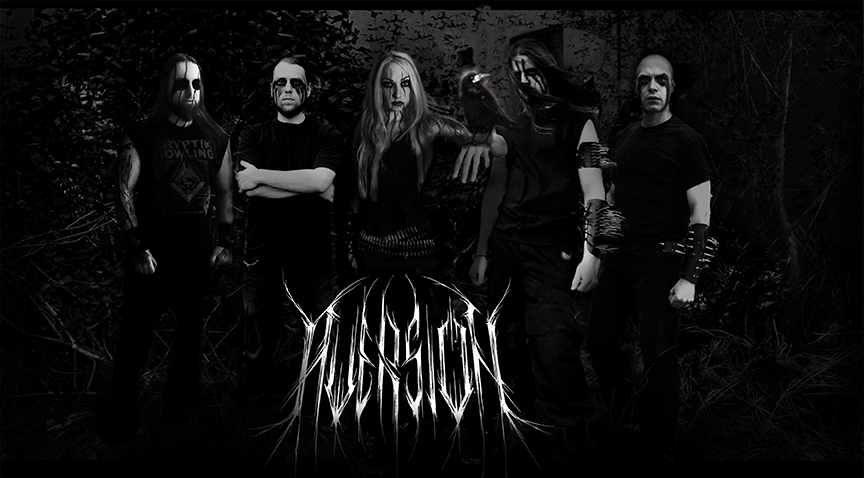 Aversion spill out from the shadows of Montreal, dragging behind them the familiar corpse of old school Scandinavian black metal. Sweeping across the eastern provinces of Canada like a plague, Aversion certainly has total northern darkness of the soul syndrome, so obviously I had to reach out to them.

How are you guys? What have you been up to recently?

Doing great over here. We have a short string of shows left to play, so we’re rehearsing a lot as of late!

How did you decide on the name Aversion?

It channels hate through itself. That’s what represents us best; an Aversion to life.

What inspired you to play black metal?

In Heavy Metal, let alone Rock ‘n Roll, there are many many ways to go about it. Sub-genres of the sort, and there’s something about the energy that Black Metal procures. The ambiance… the atmosphere of pure evil. Any black metal music we have listened to in our lives have greatly inspired us to clear our own path in this direction.

Vena Kava: I always feel need to touch upon the deepest and darkest parts of myself, black metal allows me to experience this.

Clearly not all of us listen to the same records. But we all listen and know about some of the more obscure black metal bands, and both some of the more “mainstream” as well. Listing them has no meaning. Because we play what we play, and that is that.

Vena Kava: all of us in the band draw upon different influences, for me its death, occultism, and shamanism.

What do you think it is about black metal that calls people to it?

The ambiance that the sound itself creates. You can either drone down on some slow down-tempo riffs, or thrash-out in the pit to some crazy blast-beated tremolo-picked guitar riff that everyone likes. The vocal screams of evil and despair comes out to reach you. Those are good parts of the essence of this music.

Vena Kava: Black metal explores that very essence in our society  that gets swept underneath the rug; its those topics people fear thinking and talking about and its what makes people uncomfortable.  But it’s ingrained within us, whether we  like it to be or not.  I think it’s often this that draws people to black metal. Our society is obsessed with the ideals of birth, life, and beauty; but there is also death, suffering and decay.

Who is in the band?

Vena Kava’s in charge of the vocals, Max Macabre for the guitar, Nemrod on guitar as well, Leather King on bass and Vilain on drums.

Does Aversion demand anything from its audience?

Listen in, get in. Hate with us, hate us, hate the world. Go for it. Just check us out first before doing anything drastic, but just do it. This is black metal for all and for no one at once.

What is your writing process like, does Aversion have a single person that writes or do you write as a group?

These processes can change from time to time. There are different ways to go about it. We go with the flow basically. For each first riff that is created, we can let that once speak for itself and follow the groove unto the next one, and the next one etc. Basically just letting your mind go as you play. And that right there is art.

Can you tell me about the recording process?

Our self-titled album was tracked by ourselves, in the few studios and garages we have. In our apartments. We tracked in the comfort of the unforgiving cold Canadian winter. I don’t know, does it sound raw? If it does, there’s your answer.

Does Aversion have a message, be it satanic or otherwise?

It could be anything. Hate, Satan, Drugs, Alcohol, Sex. Anything that suits you, our music can enhance it. What are you into? Just do what you do, and listen to our stuff.

Are there certain themes to your music, if so can you explain why you chose them?

Hate. Have we said that somewhere before? Yeah. Hatred is natural to humans. Why not make the obvious stand out, this music can carry it out well as a theme.

How did Aversion come to be, what formed the band?

Nostalgia, and finding the hateful drive one once had with black metal in the past. This one is born from those ashes.

Is this a first band for any of the members or did you all play in bands before?

What are you thoughts on the album, any plans for a tour?

We are going back to the writing process now to work on our new album, so we will be focusing on this.  A few short weekend tours this summer and then we write. Our album sounds just like when we play live; we dig it. Some of these tracks are old so new blood to revamp the band’s drive will feel evil as hell.

Can you describe a live performance from your own point of view?

It’s a release from your inner-self, a separation from society at it’s highest point. Nothing matters when your onstage, channeling that energy through ourselves and out to the ones standing in front of us. They are the ones to tell you.

What is you opinion on black metal in Canada, do you hope to see a resurgence of mischief?

Any mischief in the name of black metal is an act of support. Do what you will, but resurgence or not, Aversion or not, black metal was born in the 80’s and will remain so until the end of humanity.