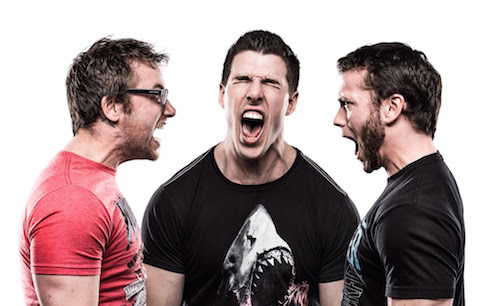 Speed Control is a rock band from the Yukon. The trio is made up of brothers Graeme and Jody Peters and Ian March. Not only do they have some pretty impressive talent, they also like to give back to the community by offering their RAWK Camp – a three to five day event geared towards musical education for youth and a public performance for its participants. They have performed these camps across the country and are currently on the road taking their camp to cities in Ontario and British Columbia.

We had the opportunity to ask the band a few questions about their RAWK Camp in this email interview. If you want to learn more and check out where they’re playing next, be sure to check out their social media below.

First of all, I think the idea of RAWK Camp is great. How did you come up with it?

The idea for Rawk Camp came out of two things, first – the frustration of losing money on tour (it’s hard as an independent rock band from the Yukon to make any money while on tour). The Second reason is that, I used to run a SCHOOL OF RAWK (basically Jack Black school of rock but my own version) in the Yukon and I missed connecting with kids and passing on the knowledge of RAWK.

Can you give us some more details on it?

Each Rawk camp consists of two main classes.  The morning we have the Youngsters (ages 8-11) who are more beginners.  We sit in front of the kids, kindof like “America’s got Talent” and we quiz each kid (like a breaking the ice type thing) and we ask them ridiculous questions like “Would you rather have no hair on your head BUT you have a mohawk running down your face, OR would you rather have helicopters for knees?”.  Once we kind of get the kids more relaxed we do what we call the DRUM TEST where each kids gets to sit behind the drums (its the most sought after rock instrument, as it is the loudest) and we see who might have a bit of rhythm. Once the Drum test is done, we then split up into groups, Drums in one room, Guitars, Bass, and Keyboards in another and then VOCALS in another.  Within the first hour of camp we usually have the rough version of “Breaking the Law” or “Smoke on the Water”.  ITS AWESOME.

What kind of things would your students expect if they attend the camp?

FUN, Noise, BACON, and basically a general sense of awesomeness.  Music is about making music together as friends.  SO what if you make mistake?  If you do make a mistake then make fun of the person who made the mistake, it becomes a joke!!! Be comical, be hilarious.  Break down the walls of “DO IT RIGHT”!  We say do it LOUD!!!

Who is the main demographic?

Our camps are usually geared towards 8-16 year olds but we had an 82 year old grandpa sign up once.  He saw our Poster that said “RAWK FOR ALL AGES” and he went out, bought a 5000 dollar custom Telecaster and then came to camp….. He’d never played before in his LIFE  it was sweet!!

You have a few different sessions that you offer, can you explain them?

Other than the normal Rawk Camp, We do “Performance Coaching” where we take existing bands and work with them on Stage Presence, Audience Engagement, and Arranging.

If someone wanted to bring you in for one of your camps, how would they get in touch with you?

Everything is on our website www.speedcontrol.ca and BOOM there you go!!

Finally, what’s coming up next for you guys?

We have a huge gig coming up in Toronto as part of Panamania on Aug. 10th.  After that, we head back West to teach 3 more Rawk Camps.  We are also in the midst of finishing out 3rd album to be released fall 2015!!