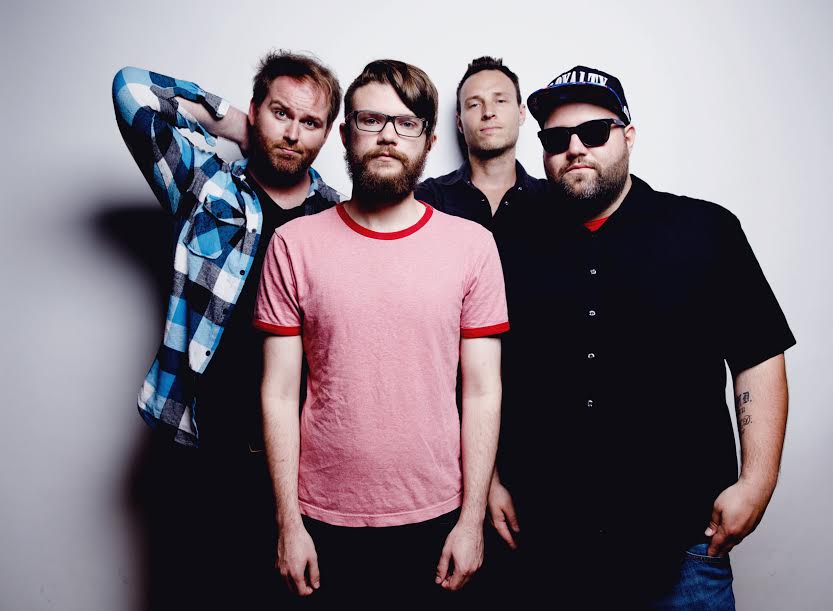 Toronto, ON based rock band, The Sole Pursuit is made up of Kyle Dawe, AJ Perry, Dylan Burrett and Adam Hay. The band has been hard at work on their upcoming album, “Infinite Regress” which was three years in the making, and it shows, the album is perfectly put together and I’m sure any rock fan will enjoy it! On top of this, the band released a brand new music video for the first single, “All Aside” today, take a look:

I had the chance to ask the band a few questions about their background, the single, the upcoming album and much more, be sure to read below and check out the band’s social media at the bottom!

Every band has a story about how they came together. What’s yours?

Originally when I entered the studio to make our first recording, there was no intention of this ever being a proper band, I simply had a bunch of songs together and wanted to make a record, rather quickly, and see how I felt afterward. Turns out I felt like putting a band together, which was lucky because things got dicey and I lost most of what had been recorded, the band being assembled allowed us to continue on and make our second EP “Ocean Floor” and the new album “Infinite Regress” too.

What made you choose the name, “The Sole Pursuit”?

When it came time to name the project I wanted something simple  and unprovocative that spoke to what this undertaking of making records and playing shows was all about. A career in music had been the only thing I’d been chasing for the better part of a decade and so the original idea was to call it “The Singular Pursuit” which quickly changed to “The Sole Pursuit” because it rolls off the tongue much better.

You have previously released 2 EP’s, “Opposing Force” in 2013 and “Ocean Floor” in 2014. Your new LP “Infinite Regress” is being release in September 2015.  How has your sound changed through these releases?

Our records have always been like snapshots of where the group is at. The first EP, as a studio project, had a lot of production flourishes like keys, layered vocals and electronic elements. The band formed while it was just being finished, and the major challenge we faced at the time was recreating the songs live.

With the new album we sound much closer to what the band sounds like in a room, more aggressive, really trying to play off each other’s energy. As we’ve gained more experience playing together the band’s approach has become more about using the studio to capture the sound of the band and less about using the band to recreate the recordings.

Can you explain your writing process on “Infinite Regress”?

There was no real conscious process for writing the record because the songs that comprise the record were all written – to varying degrees – well before we entered the studio to put them down. “Ten” for example I wrote when I was 17 or 18, “The Depths of Hell” I wrote at 26, and then a song like “All Aside” was written collaboratively with AJ Perry right before we went into the studio. The songs on the record really run the gamut chronologically.

It’s hard to say what have been the through-lines in terms of influences for our entire lives, certainly Radiohead, The Smashing Pumpkins, Weezer and Nirvana we’re huge for us as kids and in the case of Radiohead continue to be. Later, Matthew Good and Dave Matthews Band. Then, even later, Bruce Springsteen as well as Bright Eyes/Conor Oberst were huge revelations for me, as were Coheed & Cambria and the Mars Volta.

You are about to release your video for “All Aside” on July 23. What was the highlight of the video shoot?

Answer: AJ: We decided to do really quick and funny cameos in the video. So right at the beginning you can see me digging through the recycling as I’m being jumped over. I rubbed dirt on my face and everything for my 2 second appearance. Kyle’s part was being almost run-over and flashing this guy a dirty look because he was just trying to enjoy a hotdog.

What made you choose “All Aside” as the single?

Well it wasn’t easy. We have quite a few different tunes on the album that would work as singles but it came down to picking something that really announced our intent with this album: We’re gonna rock out, and scream and yell a bit, but you can practically hear the stupid grins on our faces as we do it, because this is what we love doing.

With the release of your new album on the horizon, can fans expect any tour dates?

Yes! We’re heading out east in September to plug the release of the new album, and when we get back we’ll be playing some Ontario dates before heading out West. When we’ve got most of this country covered, we’ll be heading to the states for more.

What can someone who has yet to see you perform live expect from one of your shows?

We’ve been playing a lot of new material lately, and as such the live show is pretty intense. We’ve dropped most of our mid-tempo or ballad tunes for the time being because we’ve been having such a blast playing start-to-finish rockers. We try to get the energy in the room as high as we can take it and keep it there as long as we can.

You have shared the stage with Hollerado, Simple Plan and Kim Mitchell in the past, which other Canadian bands/ artists would you like to have the opportunity to share the stage with?

There’s a few Matt Good fans in the band. Billy Talent and Alexisonfire are on my bucketlist, really any band that can turn it up to 10 but still have good songs.

What’s next for The Sole Pursuit?

Death From Above 1979 with Metz and PS I Love You played in Oshawa. OSHAWA. It was crazy. – AJ

“City on the Hill” by Desaparecidos. So, so good.

The Vanilla Cone, tried and true.

If you were able to spend the day with any musician from the past or present, who would you choose?

Levon Helm of The Band. All evidence seems to indicate that that dude was one of the coolest to ever live.

If you’ve checked us out online and like what you’ve heard please take a look at our tour dates and come on out and see a live show. We can assure you that you will be thoroughly rocked and have a good, good time.