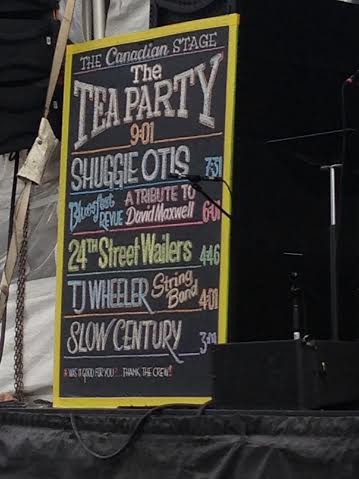 The Tea Party returned to the Canadian Stage at the RBC Bluesfest in Ottawa, marking four years since their last performance there.  Frontman, Jeff Martin, addressed the crowd about their highly anticipated return.

“It’s been too long.  Well it’s entirely my fault, you know.  I made the decision to live on the other side of the planet.”   Martin returned to Canada in June from his studio and home in Australia to perform in several summer festivals in Ontario and Manitoba, with The Tea Party, and a few solo acoustic shows as well.

“It only takes moments like tonight, to remind me where the best rock and roll crowds are in the world.”  The concert-goers at the fully packed stage were eager to take in all that The Tea Party had to offer by demonstrating their enthusiasm loudly. 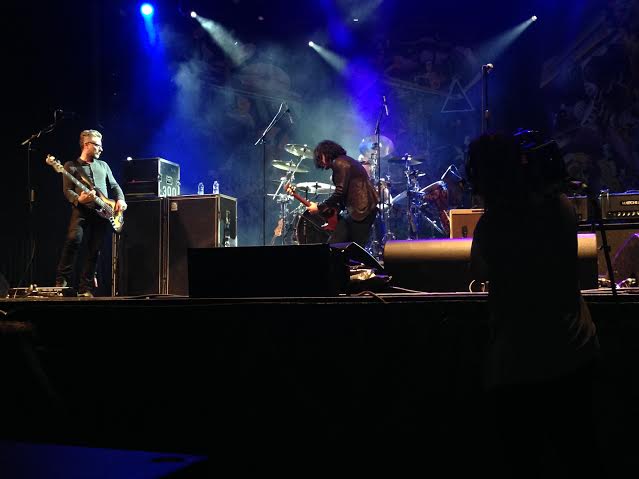 The set included favourite songs from all of their most prominent albums.  The band opened with the Writings on the Wall.  The robust and heavy sound was exactly what was in order to set the stage for a night of progressive rock and blues with splashes of Middle Eastern influences.  Martin’s smooth baritone voice rang through the night as the show got underway.

The Bazaar (which began with the opening bars from Cypher) followed.  Again, Martin engaged the crowd by asking if they remembered this Tea Party classic.  To produce a sound that is classically Middle Eastern, but by using an electric guitar, Martin often employs alternate tunings.  These elements were both exotic and grinding, complementing each other effortlessly.

“That’s the way you start a rock concert!”, he exclaimed at the end of the song. 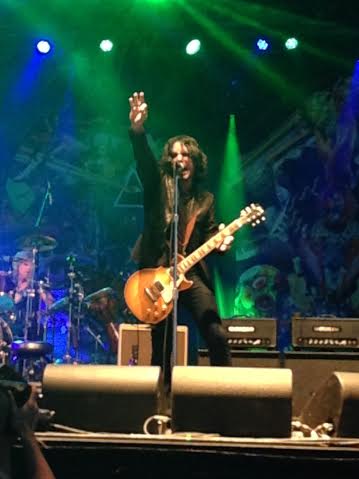 Crowd favourites Lullaby, Psychopomp and Fire in the Head, aimed to deliver the audience into a trance-like state.  Although, Martin was quick to point out that their lullaby is not meant to be interpreted in the traditional sense.  He wowed the audience with a dazzling guitar solo and use of the theremin.  Stuart Chatwood then helped to enhance the mood with his work on the keyboards during Psychopomp, as fans were ushered down to the dark side in this seductive song.  Fire in the Head delivered soulful and enigmatic lyrics coupled with heart-pounding music.  Often described by Martin in the past as a song that could have been a ringtone, it did not disappoint.

The tone of the concert changed as the band played two songs from their newest album, The Oceans at the End.  The song for which the album is titled was next.  It offered an aural experience that is best encountered live.  Martin’s guitar solo tore open the song from the soft, rhythmic sound, reminiscent of waves, to the fiercely loud ending.

“Sometimes you have to write a song that you wish you didn’t have to”, Martin explained to the crowd as, the electric guitar was switched out for the twelve-string acoustic guitar as Water’s on Fire was introduced.  This song provided a raw glimpse into the personal trials of Martin, who wrote the song to expose the message that sometimes “the truth hurts”.  He encouraged the audience to sing along, stating that the audience would “help to ease [my] pain” and that there was “comfort in numbers”.  He abandoned his microphone partway through the song to kneel in front of the audience with arms stretched out as he listened to the crowd sing out the lyrics to the song.  The moment was well received by the crowd and the magic could be felt as the gap between rock star and fan was minimized.  Water’s on Fire ended with an excerpt from Release that again had ample audience participation.

Again the guitar type was changed up.  This time, Martin opted for the red double-neck electric guitar that is anything but modest.  Heaven’s Coming Down was played in grandiose style.  The audience continued to provide energy to the concert by happily singing along to the song that is arguably the most marketable song on The Tea Party’s roster.

Drummer Jeff Burrows was a force to be reckoned with all night.  But his talents were best put on display through the playing of Save Me with Kashmir played in the middle of the song.  The complicated beat patterns were timed perfectly as he attacked the songs with loud cymbal crashes and heavy drumming.  Martin incorporated some Middle Eastern influence with the use of an esraj at the beginning of the song.  The instrument, also called an Indian harp, achieves the characteristic effect through its sliding pitch, or portamento style.  This translated to an element of melancholy to the song.  Martin’s sense of humour shone through, however, as he jokingly played an excerpt from Mary had a Little Lamb.  He finished this song grouping by playing a violin bow on his electric guitar, reminiscent of the stylings of Jimmy Page.  At the end of the song he surprised the audience by tossing his bow out to the audience.  He then praised Burrows for his mastery of the drums.  Several times through the night he knelt in front of Burrows while playing his guitar.  At the end of Save Me he said, “there is only one thing you can do when you play in front of a drummer like that, you kneel before them.”

Finally, the set finished up with a re-vamped and industrial sounding Temptation.  The engaged crowd danced along to the heavy guitar and electronic keyboard sounds while shouting out “temptation” into the humid night air as the concert came to an end.

Fans were immediately treated to a powerful encore that featured Winter Solstice, Sister Awake and Paint It Black.  A variety of instruments were featured, which included Chatwood on the harmonium.  This instrument is again an essential element of Indian music.  It provided the necessary backdrop for the fusion of Western and Eastern music that the band is so well known for.  Martin plucked out the melody to Winter Solstice and Sister Awake on his twelve-string guitar before adding a key piece of the rhythm on his dumbec as Sister Awake transitioned into the “absolute power” of his electric guitar, as he often refers to it.  A highlight of the encore was when Burrows playfully interacted with Martin as he came back to the stage to finish off the set with the trio playing with intensity and force.

Thankfully, fans will not have to wait long for their next taste of The Tea Party.  The Iconic Album re-release of The Edges of Twilight is set for September 4, 2015 with a nation-wide tour to follow, kicking off in their hometown of Windsor, Ontario.  They have also teamed up with Pledge Music to offer some exclusive merchandise and special ticket packages for the upcoming tour.