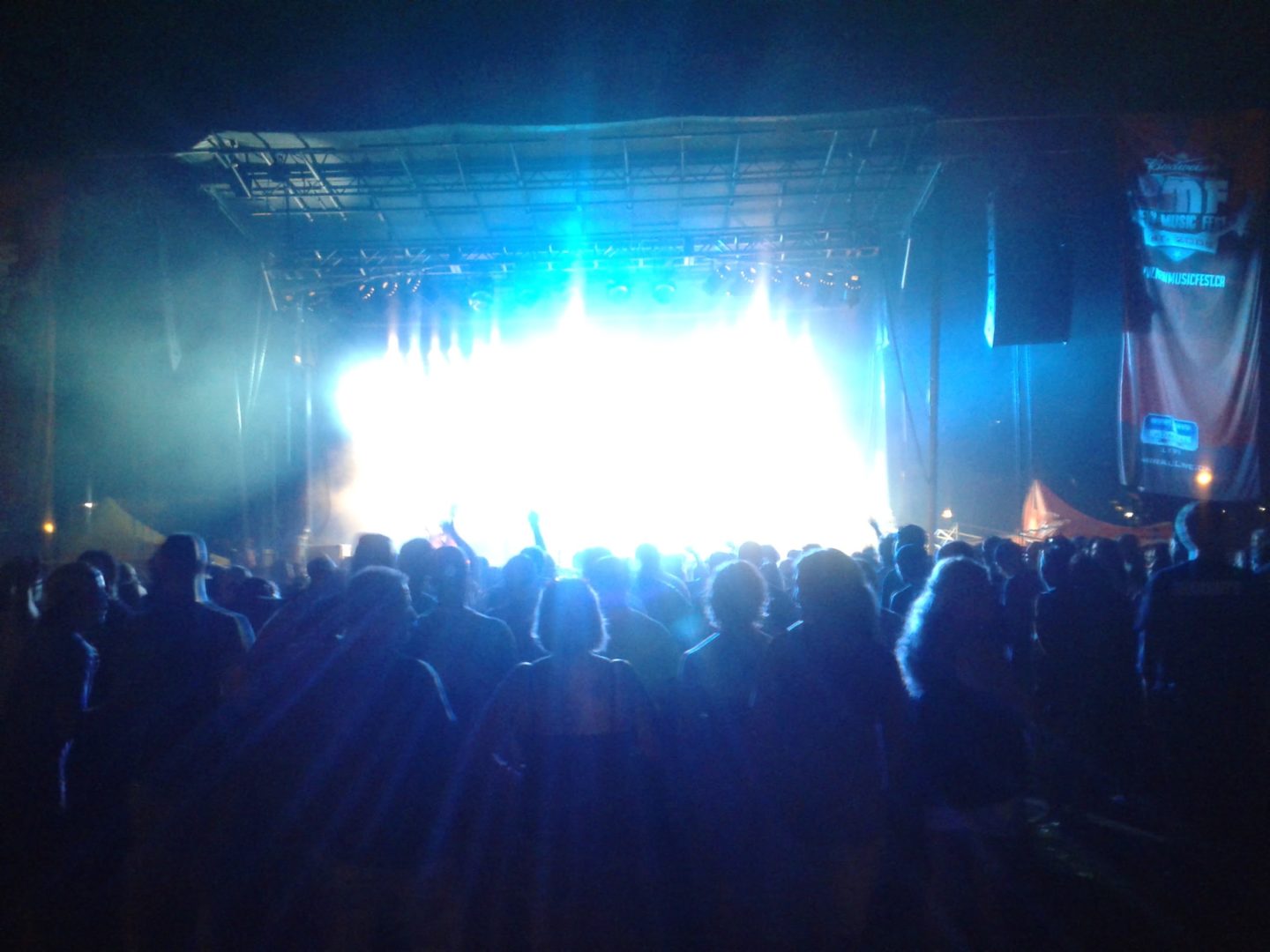 New Music Fest has been running for 8 years in Barrie but this is the first time I’ve been able to attend.  It is held at Heritage Park, on Barrie’s beautiful waterfront. The first day Friday, July 17th started out wet and rainy for the majority of the morning and early afternoon.  I was beginning to wonder if it was going to be a very soggy experience!  I kept optimistic and the rain stopped and held off for the entire night, leaving it a little on the cooler side but still enjoyable.  This was the night I was really looking forward to, a local band I had been wanting to catch, and some of my old faves.

The first band on, was Golden Gate Graves- who I unfortunately only caught the last couple of songs.  Their set must have been quite short as they were late getting the gates open and I still missed most of their set.  Their sound was great however.  Then on came the Alpacas, a local Barrie outfit.  Their sound, and connection to each other on the stage was great, and this is in my books a band you MUST check out live. 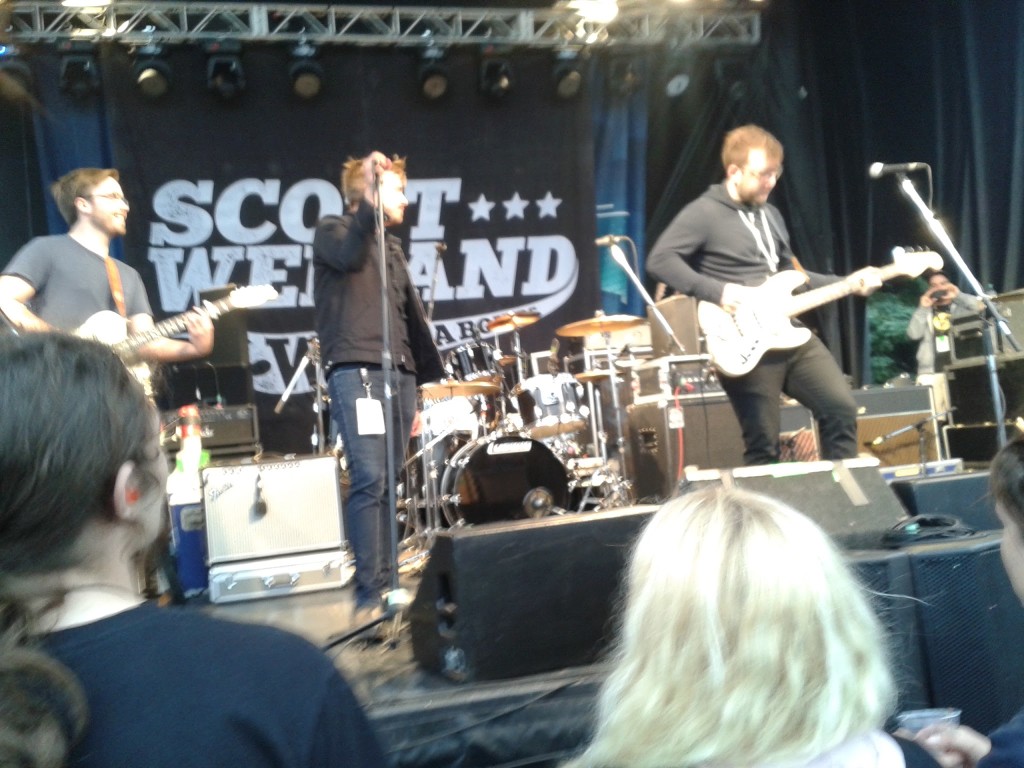 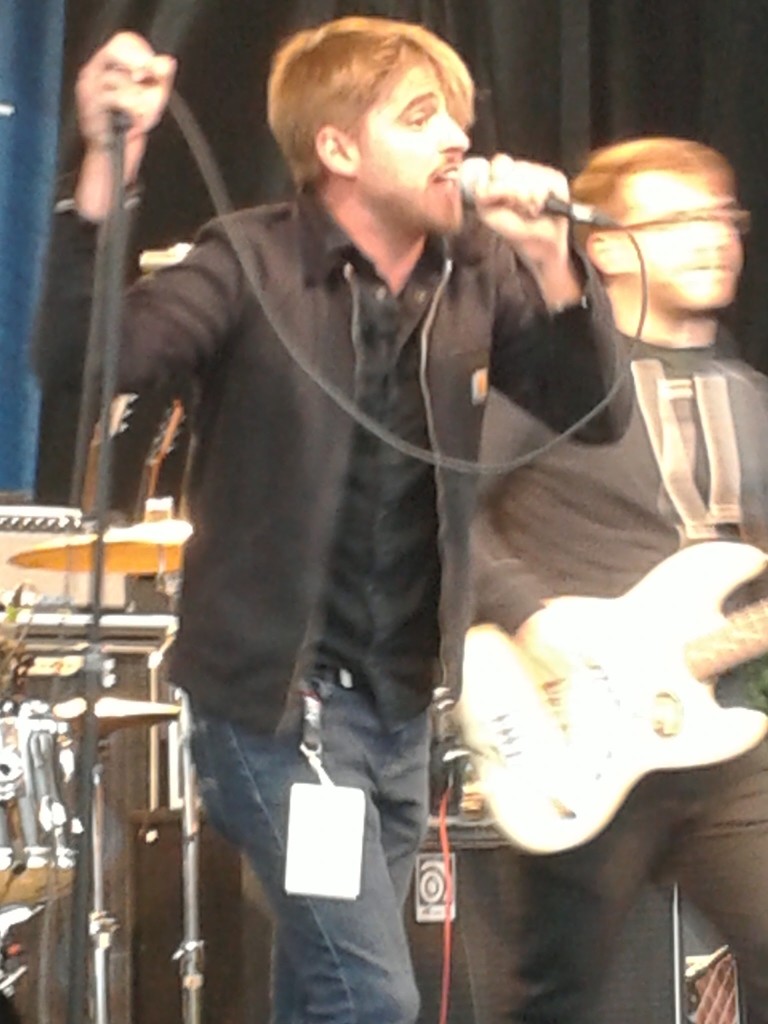 Next up was Scott Weiland and The Wildabouts.  I was really wondering what was going to happen with this set, as I’m sure many people were.  I wouldn’t say it was my favorite of the weekend by no means, but I did still quite enjoy their set.  They alternated between their original material and Scott’s old Stone Temple Pilots tunes.  I think my favorite of their original tunes was Amethyst- check it out it’s a good one.  They also played Vaseline, and Unglued and a few others.  The Bassist Tommy Black was great, and I even caught the new Australian guitar player Nick Maybury sneaking a few pics of the crowd before their set! 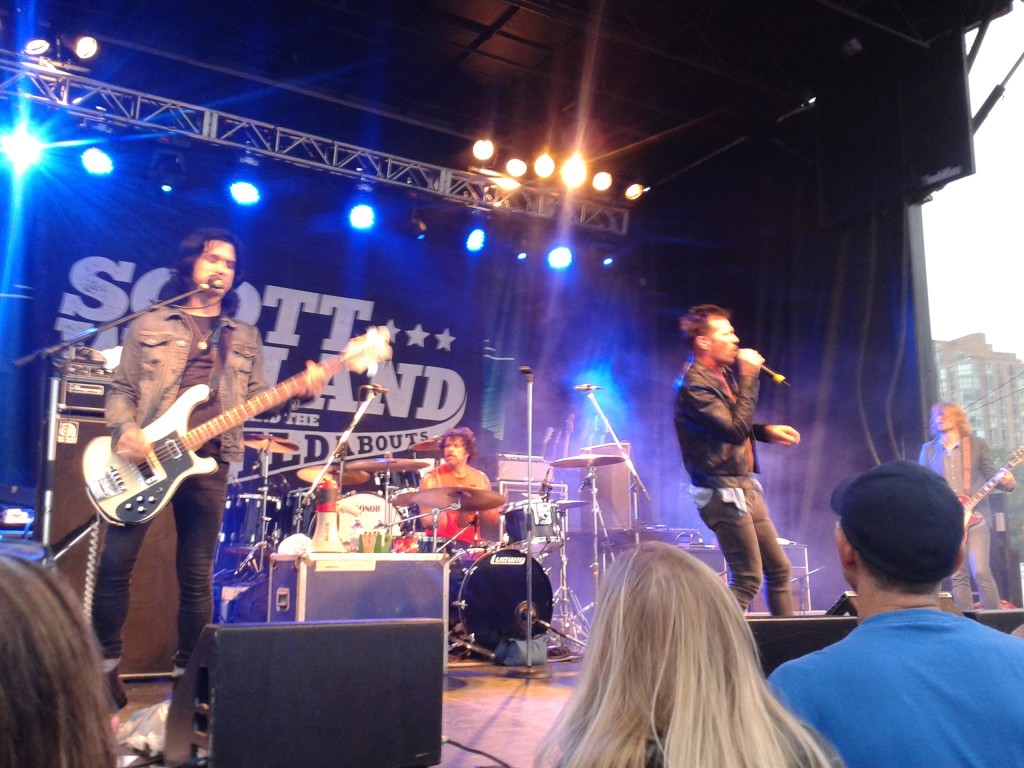 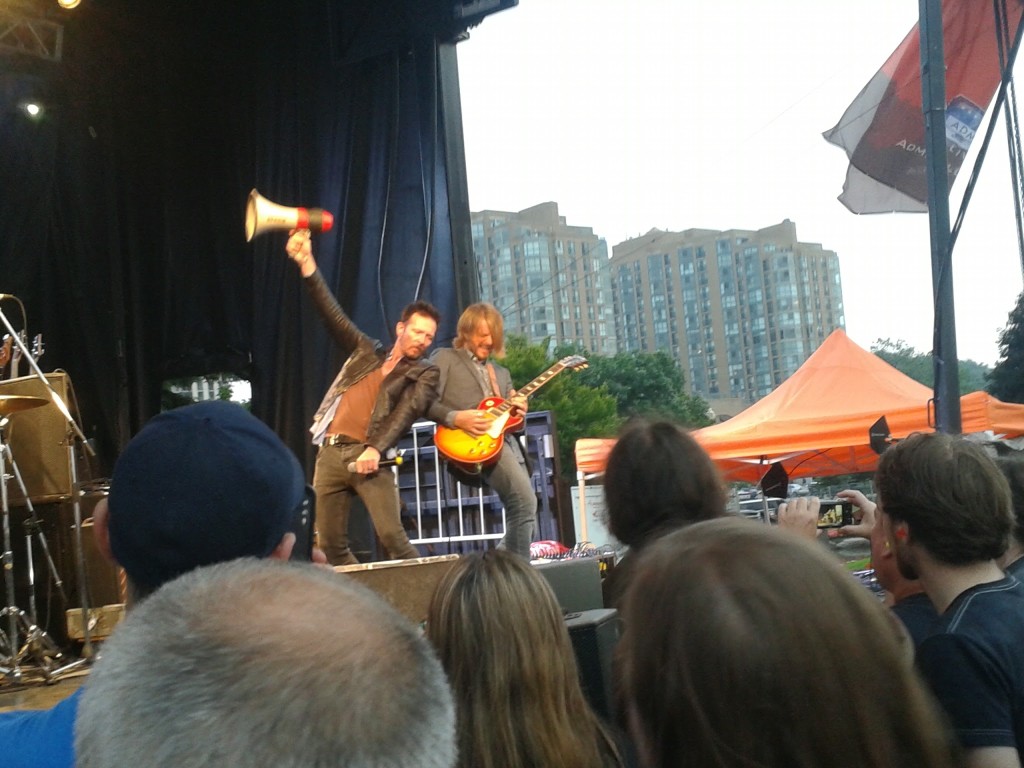 A highlight for me was after this set I got to meet up with the Alpaca’s, and picked up copies of their EP’s.  Really nice guys! 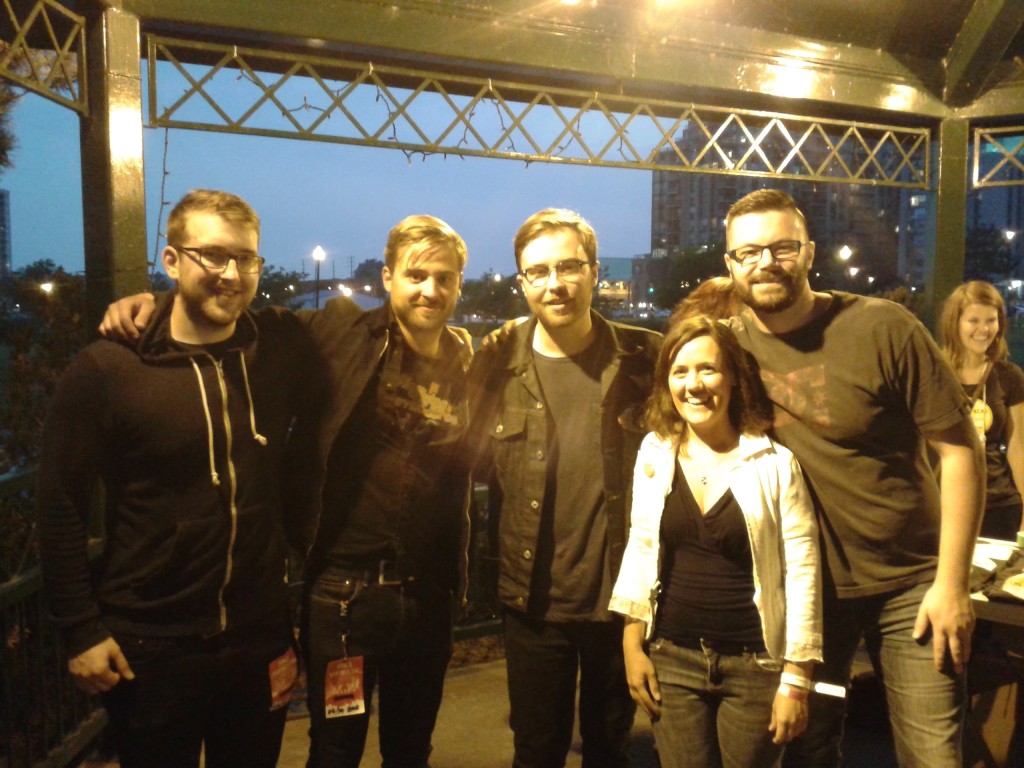 Last of the evening was Big Wreck, I have seen them before and each and every time they really impress me.  Ian Thornley’s voice is always bang on, and man can these guys play.  The bass player was on it that night, and it was just wicked.  They also seemed to play a mixture of new and old songs, but the audience seemed to be able to sing along to all of it.  Hearing the crowd sing the lyrics back so loudly was beautiful and energetic.  I can’t imagine what it must feel like on stage when that happens.  They did a one song encore “Highway To Hell” by ACDC and wow did it blow me away! The guitarist Paulo Neta sang the vocals and he was beyond awesome.

They ended the night shortly after 10:30pm.  Leaving us ready for the next day.

I wasn’t really sure what to expect for this concert since I have never been an avid follower of the acts.  This was one of the hottest days in Ontario this summer so far.  I’m glad the stage was half turned and facing a bit toward the lake, as this seemed to keep the heat down for the remaining hours of sunlight!  My biggest observation upon entering for day 2 was that the crowed was noticeably younger than the night before, since the bands were newer as well.

The first band on the stage just as most were starting to enter the park was called Final Thought.  I had actually never heard of this band, or their music.  They were a bit rushed getting set up and ready to play, but needless to say they did a fantastic job.  I thought they were really great, and I will be checking them out now for sure online. 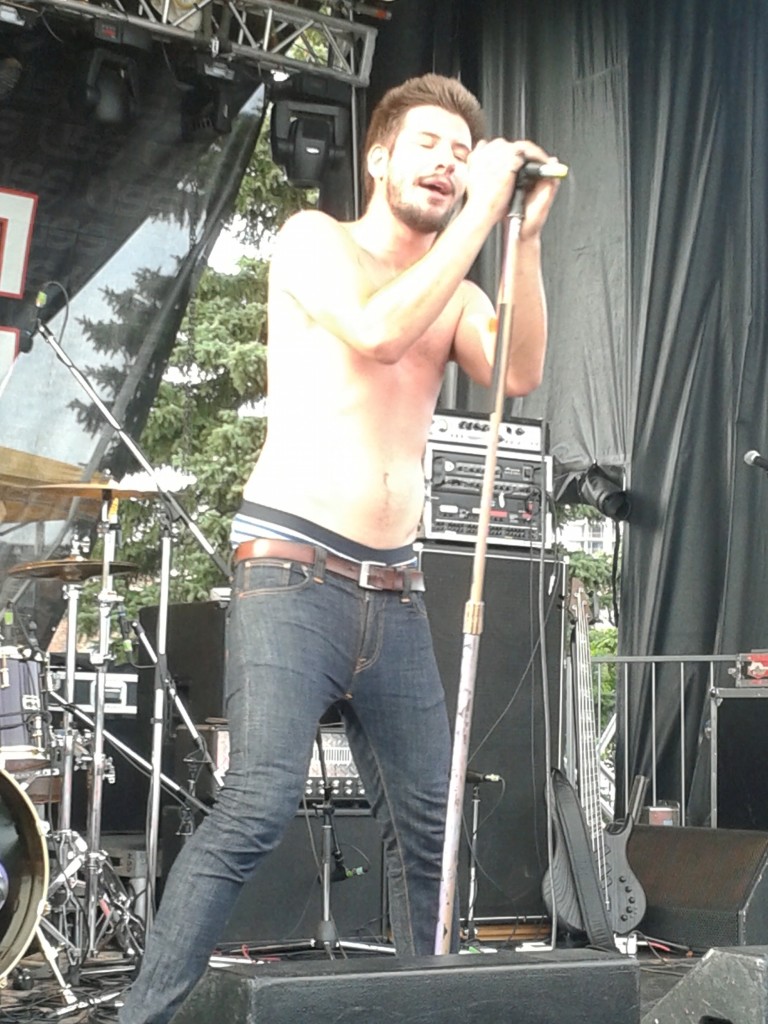 Next up was a band called Stereo Kid, this name sounds a bit familiar to me.  I don’t think I have seen them before, but I have for sure heard of them.  Their sound was a bit like Sublime, maybe sometimes on the ska side of things.  This band had totally amazing energy, and crowd engagement.  The Bassist even had a broken foot/ankle and was up there rockin’ out with the guys! They even had a song near the end of their set to get some more audience involvement, and got us all to sing along. 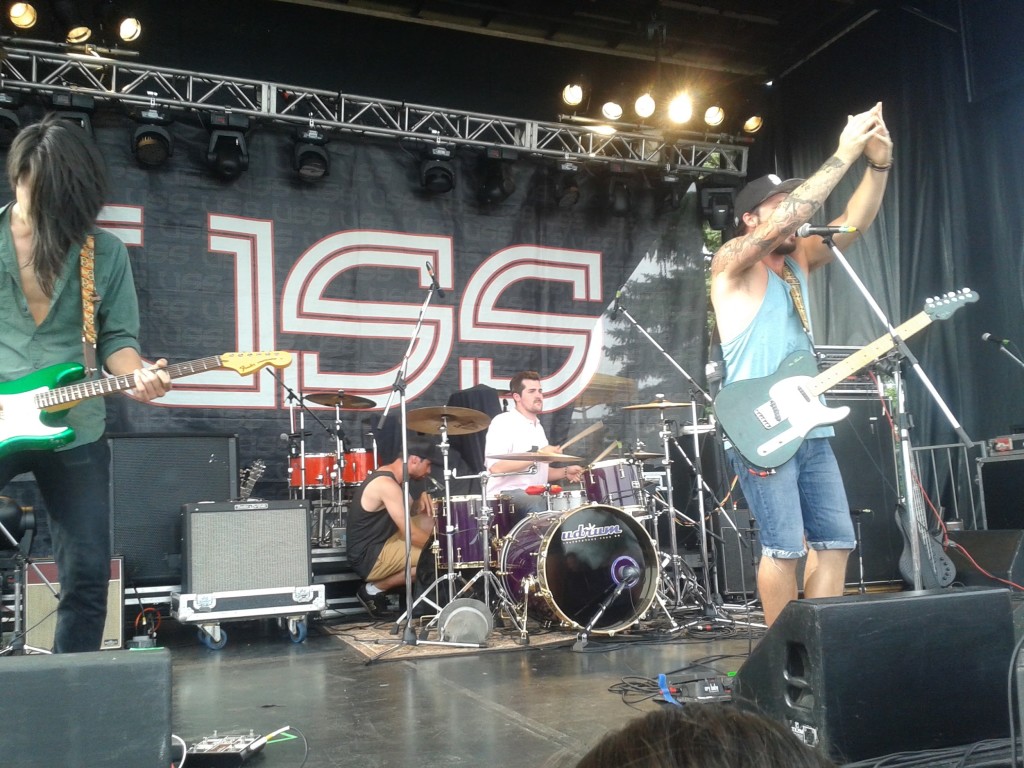 JJ and the Pillars were up next, and since hearing them on 102.1’s next big thing contest last year- I have been eager to seem them live.  They had a bit of technical trouble before they began with an acoustic guitar, but they sorted it out and began the show.  Their sound was good, and their style falls along the lines of music I really enjoy to listen to.  Their set was close to an hour long, so we got to hear a good mix of their work, songs such as Build a Man, Slip Away, The Pit, and others.  Before playing the song that won them the next big thing, Wolves (which you may have heard on the radio), they got the audience to howl like wolves! JJ’s banter on stage was great, and he had me laughing a few times during the set. 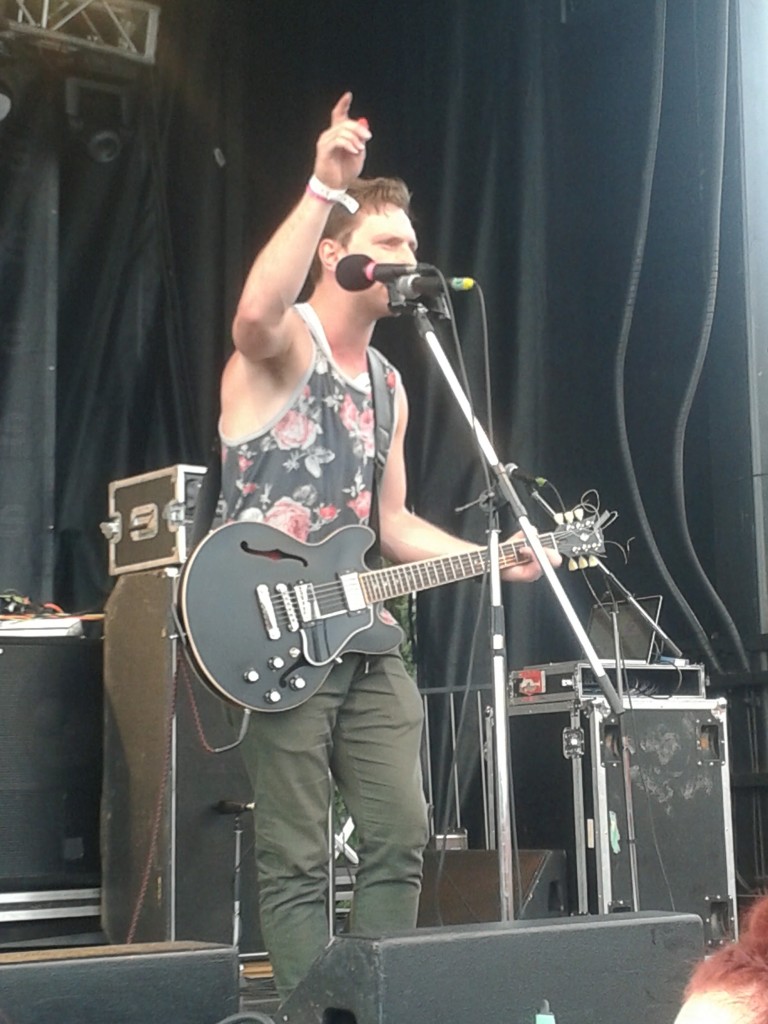 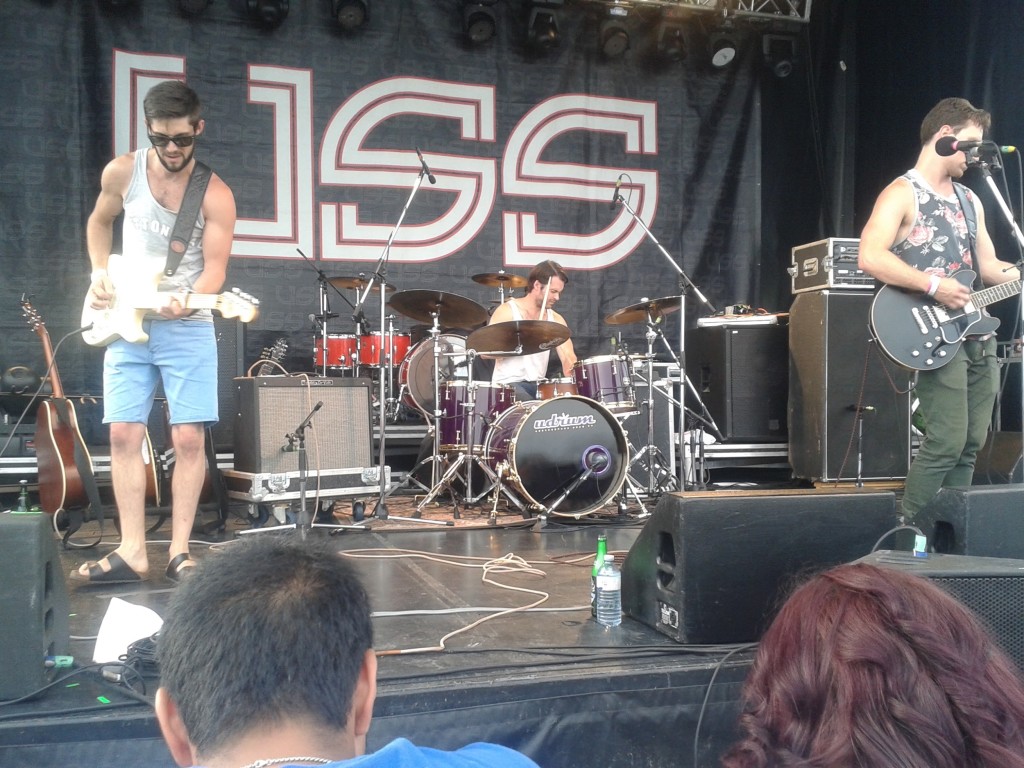 Next came Down with Webster, I have heard their stuff on the radio but that really was the extent of my knowledge of this band.  I wasn’t sure I was going to enjoy them before I got to the show, but there seemed to be MANY fans and supporters who were there solely to see them.  They opened up with “One in a Million” (which of course I have heard). After they played I realized why, wow! I was blown away, they sounded just amazing.  I couldn’t believe the energy these guys pumped out into the crowd, and I can easily see why so many people are in love with them.  It’s a mix between rock and hip hop, so it really does appeal to many fans. They played a lot of their hits, so I did recognize quite a few of the songs being played.  I found sometimes the bass was a little bit too loud- to the point where I had wished I brought earplugs, but I still thoroughly enjoyed their set.  At one point they asked the audience to turn on the flash – on their cell phones and wave back and forth like the old days with lighters, and everyone participated. 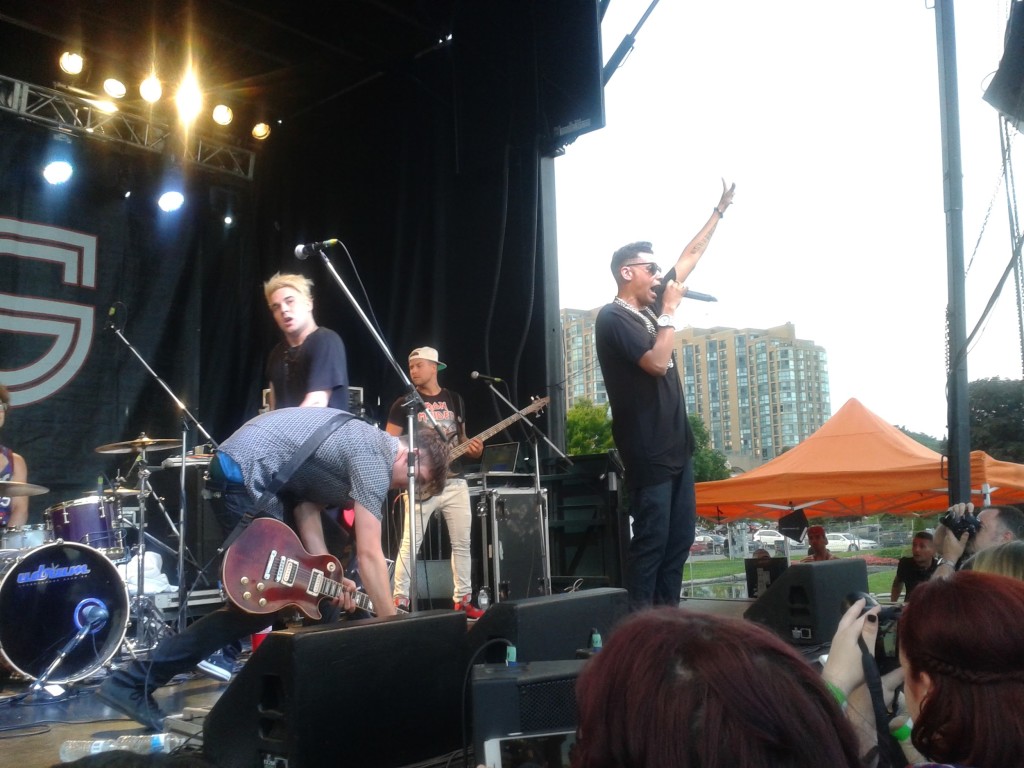 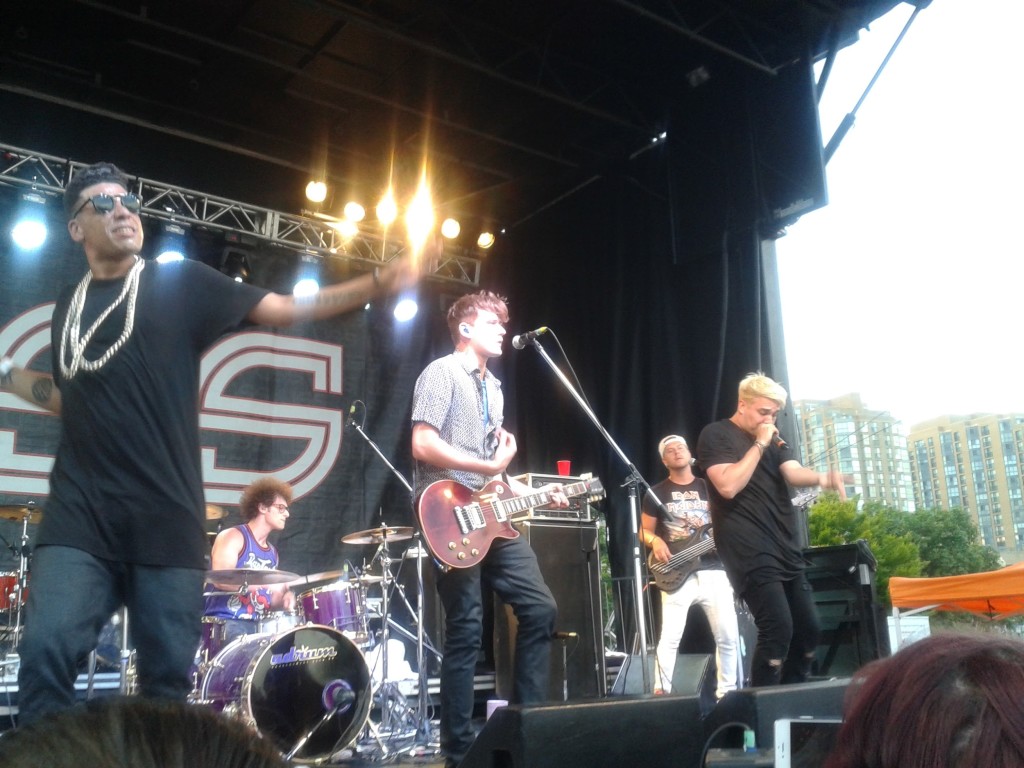 USS is a band I have heard a lot about over the radio, and what I have heard I have always really enjoyed.  The band consists of a DJ, and vocalist playing acoustic guitar and a drummer, a little different from the average band. They say their Genre is “Strum N’ Bass.  They opened their set with “Yo Hello Hooray”.  Their set lasted probably around an hour and a half.  They played almost all of their popular singles, and a few songs that people like me may not have heard. Such as “Pornostartrek”.  This band brought out the craziness in the audience, it was I would say INSANE in the audience.  I was close to the front, and unfortunately I was beside some people who were maybe a little bit TOO excited.  I got bumped into, and drinks spilled on me several times (which had not happened during any other band performance at this festival).  Eventually the people beside me got the hint that I didn’t appreciate being smashed into.  Early on in their set Human Kebab decided to go crowd surfing ! Part way through the show Human asked where the best place in Barrie was to get stationary, and took of his jacket to a #IloveGT tshirt, and claimed Giant Tiger was the place! They sang a little ditty to the people on the other side of the barricade who didn’t have legal age wristbands, which was entertaining to say the least.   The concert was great, and they also did come back out to do an encore of a few songs at the end.  It was over just before 11pm (probably because of the sound bylaws!).  I would most definitely go and see USS again, but I might stay away from the front row next time! 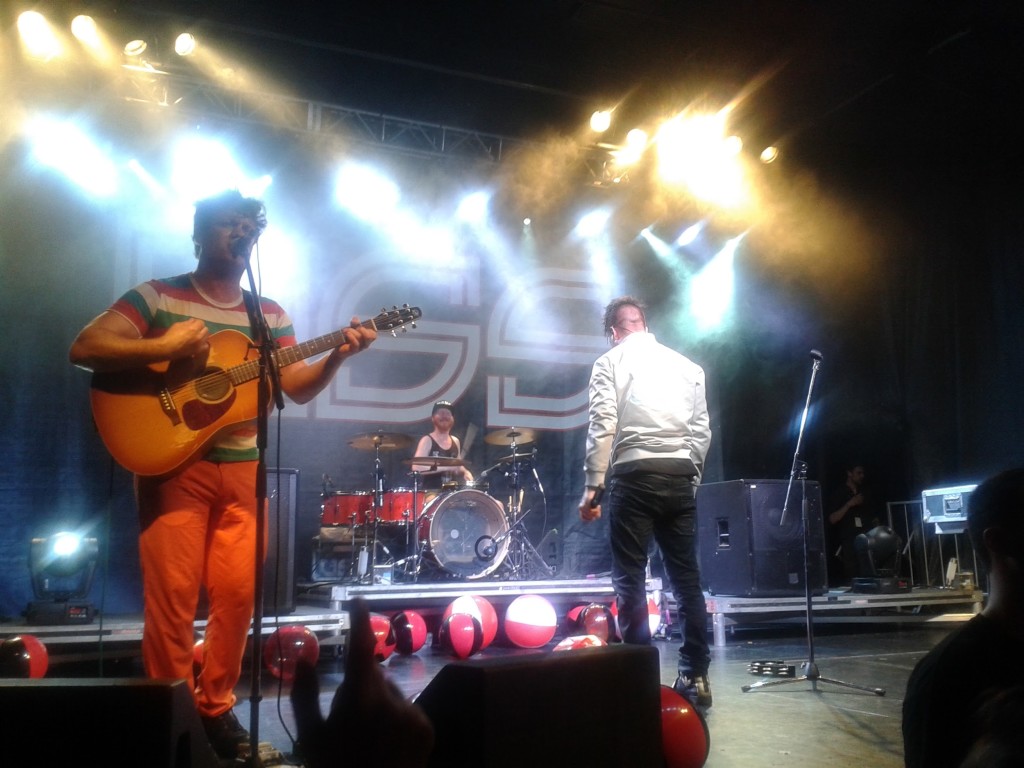 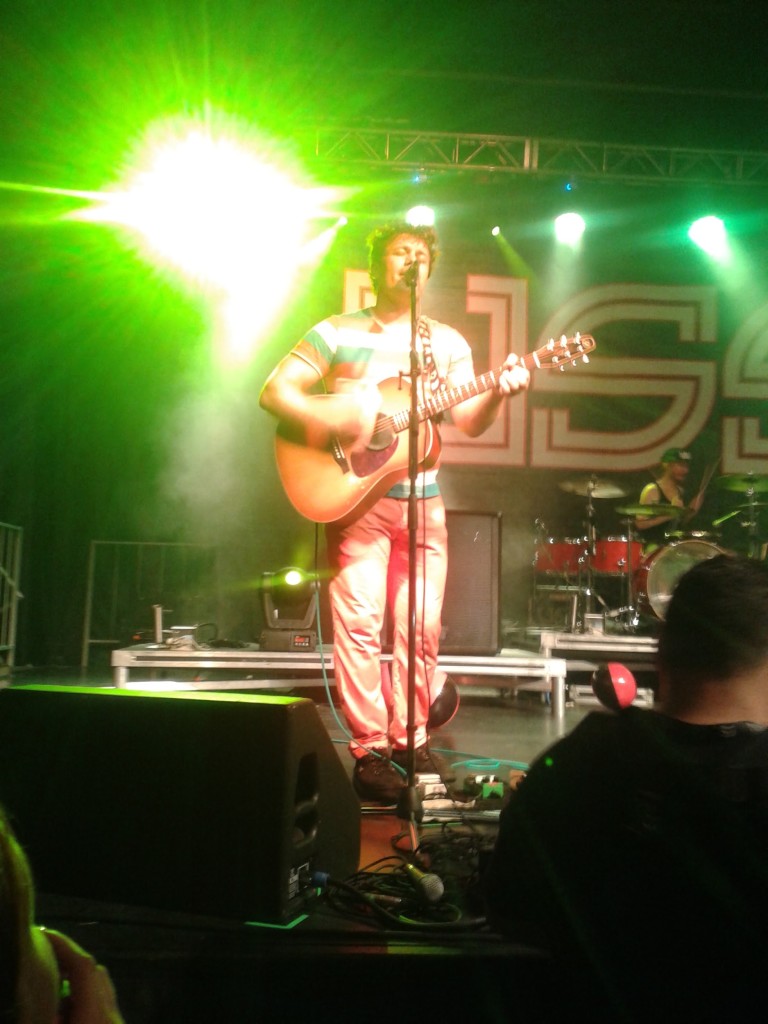