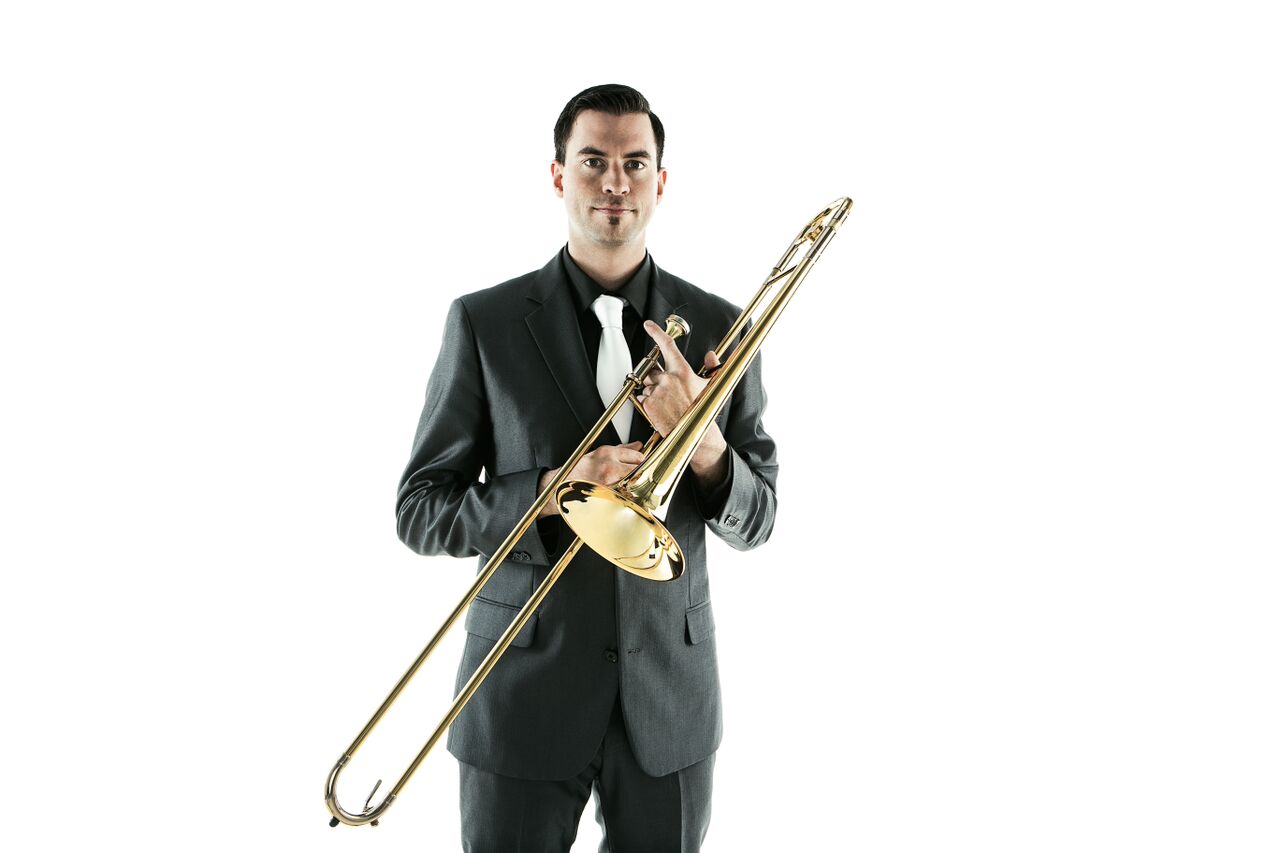 Victoria, BC based, Nick La Riviere is a multi-talented artist, composer, arranger. He will be releasing his sophomore album, “Another Time Around” on July 24th, you can see our review HERE! We had the chance to ask Nick a few questions about his musical background, his new album, and upcoming shows in the following email interview, so be sure to keep reading to find out more about this extremely talented Canadian artist!

When did you know you wanted to pursue music seriously?

I’ve always wanted to be a musician, even before I could play an instrument.  When I was a kid my parents had a cheap electric piano that I would bang away on not knowing what I was doing.  I felt like it should sound great and didn’t understand why it didn’t yet.  We also had a basic acoustic guitar.  One day I thought I’d smash it to pieces – just like the rock stars do.  My parents didn’t get me another guitar after that.  I joined the school band in grade 5 and started learning the trombone. I also sang in a choir and took piano lessons, and I’ve had a lot of music in my life ever since.  I’ve never considered doing anything else.

The people that have influenced me most have always been the musicians around me.  When I was in high school there was Hugh Fraser, another trombonist, performing often in town.   I liked his wild energetic style – not the laid back mellow music a lot of the jazz players play, but fast and sometimes furious.  He started a college level jazz program at the Victoria Conservatory of Music, and I was one of the first people to take it.  In fact, it started quite small, and I was the only person left in the program at the end of the year, that’s when I decided I’d better move on to a bigger school.  I was also influenced by the famous jazz trombone players – JJ Johnson, Andy Martin, Curtis Fuller.  Of course it hasn’t been all jazz players who have influenced me, and most of my gigs have been with bands playing other styles of music.   Celtic, cuban, funk, folk, pop, klezmer, ska, R&B.. Which leads me to influences like Sam Cooke, Paul Simon, Trombone Shorty, Jamiroquai, Ben Folds, Dr John. nd Steve Turre for the conch shells. A pretty wide range of people.

You will be releasing your 2nd album, “Another Time Around” on July 24, how has your sound changed since your first release in 2009?

My first album was all jazz.  It was energetic and featured trombone, two violins, cello, piano, bass, and drums.  I’m proud of that album, and it was certainly good music to perform, but I wanted to branch out in to music that’s more accessible and fun.  This album features me doing a lot of singing, and the non-jazz influence is a lot more apparent. I also wanted the album to be all original – the last album was a little under half.  There’s also a bigger sound on this album, lots of layers – backup vocals, multiple trombones, etc.  I’m able to recreate some of that live by using a programmable harmonizer with my trombone, which allows me to program in entire arrangements and sound like a 3 horn section.

Your first single from the album is a track called “WooHoo” which is very unique in itself, is this any indication of what we can expect from the rest of the album?

I feel like the style of Woohoo was partially influenced by the piano-driven rock of Ben Folds.  The other tracks on the album have some similar sounds, but some are more clearly influenced by other artists, especially the title track, Another Time Around.  People instantly recognize that as influenced by Paul Simon’s Graceland album.  Because of all the different music I play, and all the people I listen to, this album is all about variety.  Hopefully there’s nothing so different that a listener who likes the style of one track might not like another, but it’s at least diverse enough that I can’t be said to only have ‘one sound’.

How has the single been received by the fans?

So far, so good. And I’ve got a music video for ‘Woohoo’ coming out for it in the next couple of weeks that I’m very excited about. We just filmed last week, and it looks like it’s going to be pretty quirky and awesome.  So, be on the lookout for that!

The melodic/choral/stylistic inspiration usually comes from the music I play with other bands, or the music I’ve been listening to heavily around the time of writing.  The events in my life at the time usually lead to the lyrical ideas…especially break ups, gigs that don’t go well, unrequited love.. the usual.

Can you explain your writing process to us in regards to the new album?

Most of my songs start at the piano and trying to find a chord progression I like to write something around.  After a lot of terrible ideas at a melody and direction to take the song, I finally end up with one that sounds good enough to record and perform.

You have two album release shows coming up at Hermann’s Jazz Club in Victoria BC on July 24 & 25, can fans expect any other dates to be announced?

Yes, the band is also performing at Butchart Gardens on August 19th, and I’m also working on booking some shows off the island in Vancouver and the rest of BC.  More to come!  The best way to find out about my shows is by signing up for my mailing list at www.NickLaRiviere.com.  There’s also a gig schedule there, though it includes all the shows I play as a sideman with other groups.  They’re all good shows, but you won’t be hearing my originals there.

When can the rest of the Canada hope to see a live Nick La Riviere tour?

I’d love to line something up with the festival circuit next summer!  Stay tuned on my website for more!

Canadian Beats is all about Canadian music, so who are you current favourite Canadian bands/ artists?

Out of the big name acts, I’d say Tokyo Police Club – they’ve got a signature sound that makes them instantly identifiable.   But I think a lot of great music goes under the radar – or at least not in the top charting songs.  People like Michael Kaeshammer are creating some great recordings right now that may not be pop hits, but are still fantastic.  Another one to check out is Joby Baker.  His main gig is a producer of other people’s records (including mine), and he’s made some great sounding albums.  I had the pleasure of recording on his album Soul Sketches and it’s very cool, definitely something to check out.

I think it might have been Bryan Adams – Reckless on vinyl.

What band/ artist would you like to see in concert, but have yet to have the chance?

I would have said Tower of Power, but I got to see them at the Victoria Jazz Fest last week.  The Dirty Dozen Brass Band would be great to check out.  Also Jamiroquai if they do another tour, Fitz and the Tantrums, MGMT.. Anyone with a unique fun sound, and maybe a horn section.

I like covering songs people might not already know, songs that won’t define my band as a ‘cover’ band.  Lately I’ve had a lot of fun covering a song called Come on Now by a band in Seattle called the Westsound Union (aka Lucky Brown & the Funk Revolution – they use different names for different albums/projects).  It’s a band that most people here don’t know, but it’s a great up tempo funky tune with room for me to use my harmonizer on my trombone, and fun to sing.  The composer Joel Ricci, who’s stage name is Lucky Brown, is really friendly too, and helped me out over email with some lyrics I couldn’t figure out from the recording.

What instrument would you like to learn to play, that you haven’t already?

I’d love to be good enough at guitar to play some gigs, or at least sit on the beach and play a few tunes.  Maybe I shouldn’t have smashed that guitar when I was a kid.  But I already am too busy to keep up with all the instruments I can play to some degree already (trombone, conch shells, electric bass, some piano.. there are other instruments in my collection I’d work on if I had more time – a fully intact guitar, an upright bass, didgeridoo, various harmonicas..)

With my gig schedule I end up not having time for many extra activities apart from having a beer at the end of the day and spending time with my fiancé.. but I do enjoy taking my motorcycle for a spin whenever I’ve got the chance.

Orange is the New Black, but I say that only because I don’t watch too many current TV shows so I don’t know what else is out there.

Creating original music always feels more ‘risky’ than playing covers, though also more rewarding.  So thanks for giving me a chance to create something of my own and play it in front of an audience.  I appreciate your support, and hope to keep improving my writing and performing in albums to come.  As long as you keep coming out to the shows, I’ll be able to make that happen.