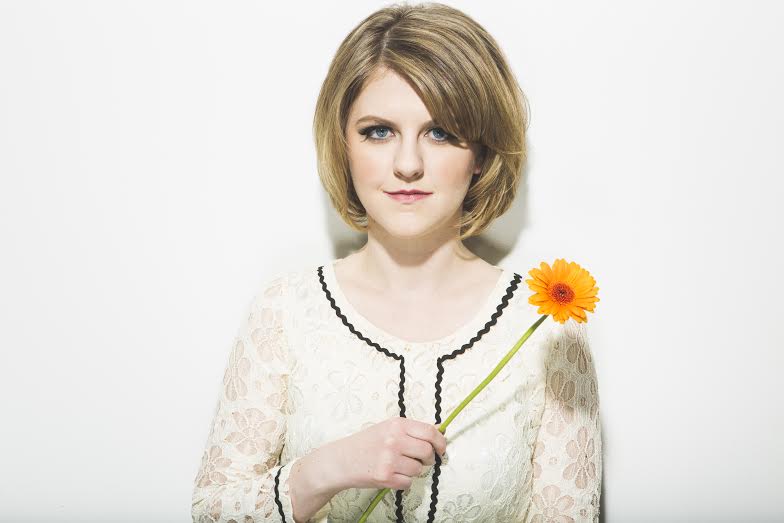 Toronto, ON based pop artist, Darrelle London has been busy, she has just released her album, “Tangerine & Blue” this past March and has done a few shows in Toronto since. We were able to ask Darrelle a few question about her background, her album and lots more, so be sure to continue reading to find out all you want to know about this talented Canadian pop artist.

How long have you known that you wanted to pursue music as a career path?

I started taking piano lessons when I was five, but it wasn’t until I was about thirteen and starting writing songs that I realized this was something I could be really passionate about.  After I went to undergrad and briefly considered law school, I decided that this nagging pull to explore a music career couldn’t be ignored.

My influences change, but the amazing classic pop songs by groups like the Beach Boys and the Beatles are always great to go back to for inspiration.  I’d say Alanis Morissette was the first female voice that ignited a spark in me. And since then, it’s been all over the map! Everything from Bright Eyes to Cold War Kids to Lily Allen.

You have released 3 albums now, how has your sound changed between the three?

Each album reflected what I was experiencing at the time of writing. The first one reflects a lot of relationship confusion and sass. The second one Is more about self-discovery and the latest one, Tangerine and Blue, really focuses on the ups and downs of life as an artist in 2015. Sonically, I’d say they all have elements of playfulness. But I think each one is also a bit more mature than the last.

It usually starts at the piano. I like to just noodle around a bit every day, and sometimes ideas will come to me, which I’ll then explore further. I’d say I write about half of my songs solo and half with other people. The most personal ones usually come from writing by myself, but writing with others helps me to explore new ideas and approaches.

Your newest album, “Tangerine and Blue” was released in March, how has the response been up until now?

I’ve been so and grateful for the response. I funded the album in part with a PledgeMusic pre-order campaign, so my supporters really showed up for this one. It was great to involve them in the early stages of making this album. It’s been so rewarding to hear their feedback. And I’ve also been fortunate to receive a lot of very kind feedback and reviews from Canadian press and media, as well as CBC and satellite radio.

You worked with Robyn Dell’Unto, Justin Rutledge & Emma-Lee on the new album, what was that experience like?

I really wanted to turn inwards towards my community of singer/songwriters on this album. All the co-writers and producers are fellow singer/songwriters whose work I admire. I loved co-writing with all of them. Emma-Lee is always a gem to work with and is full of great ideas. She co-wrote Future History, a little love tune that’s one of my favourites on the album. Justin is the only artist I hadn’t met or worked with before, but our song, Mardi Gras, flowed super easily, and is different from anything else I’d written. And I love working with Robyn. I think we really get each other’s humour and it comes out in the songs.

Who else would you like to collaborate with in the future?

What is your favourite track off the album?

Tangerine and Blue holds special meaning for me, because I wrote it as a love song to all my supporters. It’s very candid about the tough moments I’ve experienced as an artist, but also how my supporters always pick me back up.

You recently played a show at the Rivoli in Toronto, when else can fans see you perform this summer?

Well, I’m actually winding things down in terms of performing until next Spring. I’m expecting a baby in the Fall and I’ve decided to focus on things this summer that don’t involve hauling gear all over Canada! We just launched a radio campaign for my single Viral, so I’ll be doing radio visits and that sort of thing. But I plan to be very active touring next spring and summer.

You have posted many covers on your YouTube channel, such as Meredith Brooks, Jesse J and even Rebecca Black, what is your all-time favourite cover to perform?

We still perform Rebecca Black’s Friday when a show falls on a Friday, which is fun. But I love playing Death Cab for Cutie’s I’ll Follow You into the Dark solo on piano.

I’m not very good at it, because I never know what to post. I struggle to find a balance between the personal and the professional. You need to share a bit of both to be engaging I think. Also, when are you bragging versus sharing good news and developments with fans? It’s all very tricky and I prefer to interact face to face at shows, but it definitely seems to be essential to have a social media presence these days.

If you were able to give a young Canadian artist some advice, what would that be?

I would say to try to find joy at every stage in your career development. It can be a frustrating journey with ups and downs and if you’re not enjoying yourself on stage and in the studio, throughout the process, then it’s not really worth it.

We like to include a portion of questions that may help your fans learn something new about you, so here goes:

Spice Girls Spice World Tour at the Molson Amphitheater. I was in Grade Seven. It was right after Ginger Spice quit, but the other girls totally picked up the slack!

Walking around the city in the evenings with a friend or my husband. I can walk for hours. The city comes alive so much in the summer, it’s nice to experience it in the few warm months we get.

What is your ultimate favourite ice cream flavour?

If you were to put together a festival lineup, which Canadian artists would you want to share the stage with?

Ooh I’d make it super eclectic. Like, Kardinal Offishall, Triumph, and Chris Hadfield. Something for everyone!

I think I express it to them a lot, but my supporters mean the world to me. This journey is a partnership between myself and them, and they totally get that. I’m so grateful to be able to connect with them by doing something I love. They’re the best!