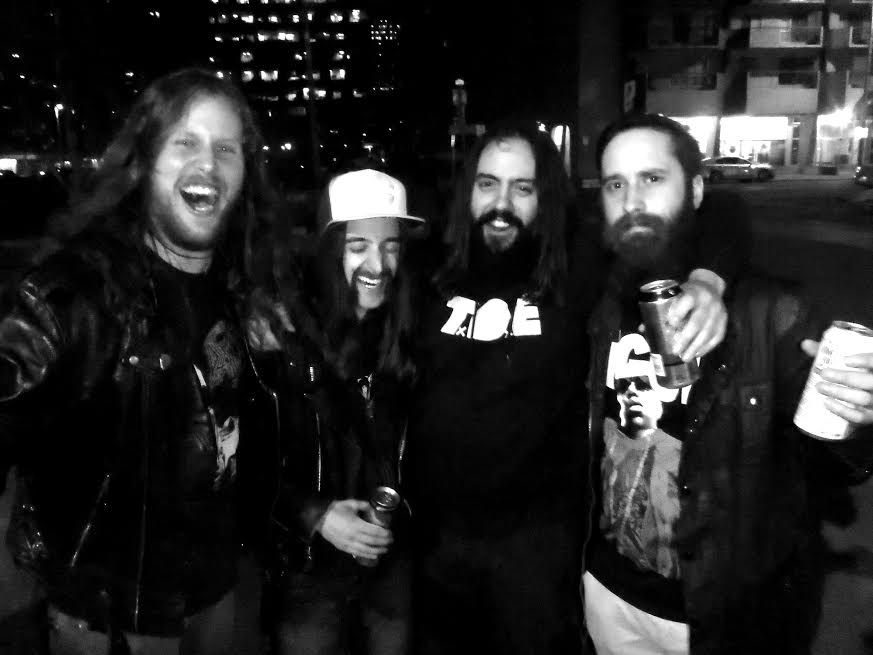 Metal band False Flag is about to crush fans once again with a new EP called Nest Of Vipers.  This will be the third offering by the down tuned super group proudly hailing from Calgary. Formed in 2012 by members of Meggido, False Flag is a heavy hitting, groovy as fuck four piece, and guess what? They are touring very soon. I caught up with the guys prior to the tour to chat about the band and the EP, and what may lurk on the horizon for False Flag.

Hey guys, how are you?

Doing very well thanks! Very stoked about getting this tour started. It’s been a couple years since any of us have toured and we’re excited to finally bring this band on the road.

Tell me about the band, there hasn’t been any line up shifts or anything right?

There was one at the starting of this year. We said farewell to our previous drummer Nick Purdy in January 2015, who left the band to spend time with his family. We then welcomed John Byskal (We Found The Body, Bloodpaw, Julius Sumner Miller) to the band. I feel like he was the final piece in making this the heaviest band, I’ve certainly ever been a part of playing with. I`m sure the other guys in the band would agree with me also.

What inspired you to create False Flag, and what made you decide to shift your energy away from Meggido?

Well Meggido sort of fell apart in early 2010. I then joined War Eagle Rising for a short while before putting Lordosis together, which I currently still play drums in. Lordosis played a lot of shows and went on a couple tours (one of which being a 14 date western Canadian tour) before taking a break.

False Flag was born out of my NEED to play the guitar again and this time I wanted to play an 8 string guitar. I think they sound great, especially since I`ve always been a huge fan of Meshuggah. You can really get that familiar and signature sound with one. You can also easily rip off Meshuggah too easily with one. Many bands are guilty of this and we try more now than ever to have our own sound with every new song. Our first EP (Orobas) was heavily influenced by Meshuggah (Especially the song “Crusader“) but on our new EP you can find only traces of their sound in us, within a wide range of influences now, compared to before.

What were some of your influences for Nest Of Vipers?

Your new EP, Nest Of Vipers, is available august 4 . Can you tell me a little bit about it?

‘Nest Of Vipers’ was recorded in Calgary, Alberta at Oracle studios (Which is run by our previous bass player, Garrett McElroy, who also plays in Afterearth.) It was recorded and engineered by Garrett and then mastered by Sacha Alan Laskow who plays in Every Hour Kills. The record sounds huge and we have had a few people say some nice things about it, including yourself.

We have it available for pre sale via our bandcamp page. (https://falseflagmusic.bandcamp.com/album/nest-of-vipers)

This time we really shook things up. We actually started recording the album before we finished writing it. I wrote three out of the four songs, with our other guitarist Mike Harach writing the fourth (`Reversion Of Sin’) .I also played drums on three of the four songs, with John coming in for one day to record a song he also had to learn on that same day (`Nest Of Vipers`) It was pretty intense, but I think that added to the overall sound of the songs themselves. The album actually sounds “urgent“ to me, in a good way. I started writing the vocals once the tracks were almost completely finished being recorded. I definitely work on pressure to write my lyrics. Writing is definitely not something that comes easily to me. I’m more of guitar player than a vocalist and lyricist, though I still enjoy writing lyrics that I get to scream at people.

I really find comfort in the fact that being a metal vocalist is one of the few hobbies that allows you to scream and get angry in a public place without getting arrested for it.

Do you write music with an audience in mind?

Definitely! When I’m working on a new riff, I usually have to picture it being played in front of an audience. I still write the riff to make me happy before anyone else though. I’d never write music to please an audience, but Id like to think I have a good idea of what a metal audience would like to hear at a live show, mostly Because I myself am merely a music fan and just write songs that I’d like to hear.

Who was the producer for Nest Of Vipers? Is the band still producing itself still?

We still produce ourselves but Garrett has tossed in a few ideas here and there that make the overall album better. Nothing that would be considered a writing credit but more for adding effects or samples. He also was very helpful in achieving the guitar sound that we always wanted.

How long did it take to record Nest Of Vipers?

It took maybe 6 days total to record the album but it was spread out over a few months. That definitely helped us since the album were still being written while we were recording the songs.

Are there any stories from the studio you can share with me?

I probably shouldn’t share this, but I recorded the lead guitar solo for `Nest Of Vipers` while I was black-out drunk. Had a few too many drinks in the studio that night but I still like the solo. I did want a `beer soaked` rock n’ roll solo, but I think I may have been a bit too drunk.

False Flag will be touring soon, what are you most looking forward to about touring?

I’m mostly looking forward to just being on tour itself. Its how I want to spend my vacation this summer. There’s definitely nothing more I dream about doing than touring relentlessly. Especially since it’s been a couple years since I’ve been on the road. I’m excited to play every show on the tour and meet every band we share the stage with and make some new fans.

Is there a city you are particularly excited to play?

I can’t really choose one, but I feel like the Edmonton show is going to be a crazy one, because we actually haven’t played there yet.  I’m hoping they all turn out crazy though.

Is there a band joining you on tour?

We are joined by our good buds in Statue Of Demur on this tour. They’re one of my favourite local bands and I’m stoked to share the stage with them every night for 6 shows around Alberta and Saskatchewan.

Can you walk me through an average day on tour?

Drive. Eat. Drive. Smoke. Drive. Eat. Smoke. Get into town. Find the liquor store. Wait for the show to start. Drink heavily while having a great show. Find someones backyard to tent out in. Repeat, while saying you won’t drink as much the next night (which probably isn’t true) I only go from past experience touring with Lordosis.

If you could only listen to a single album during this tour, what would it be?

What is your opinion on the Canadian metal scene?

Its hard for me to say since I’ve only had experience with the Western Canadian metal scene. Canadian metal seems to be doing great though. I see more and more Canadian bands touring the US and Europe with known bigger acts. Its pretty cool.

After touring what are your plans?

We’re going to immediately start writing our next album once we get off the road. We`ve got a couple shows here and there but mostly we`ll be spending time working on another full-length album.

Thanks for the interview! I’d also like to invite anyone and everyone to come party with us on tour. Check our facebook for dates!
http://www.facebook.com/falseflagmusic
http://www.twitter.com/falseflag333 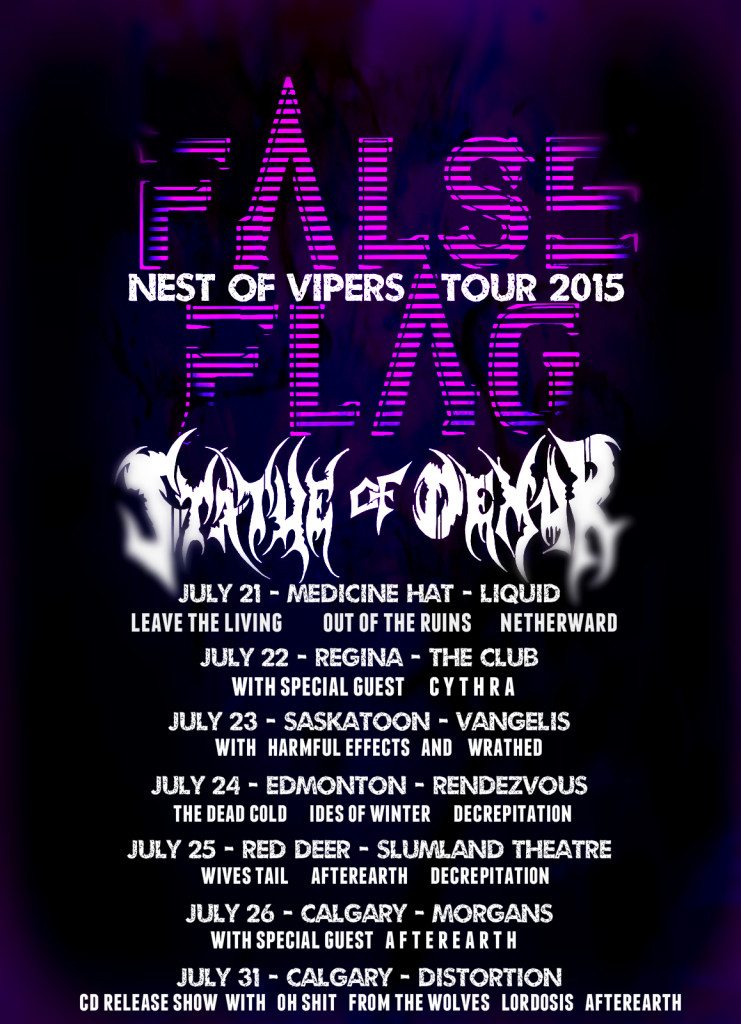