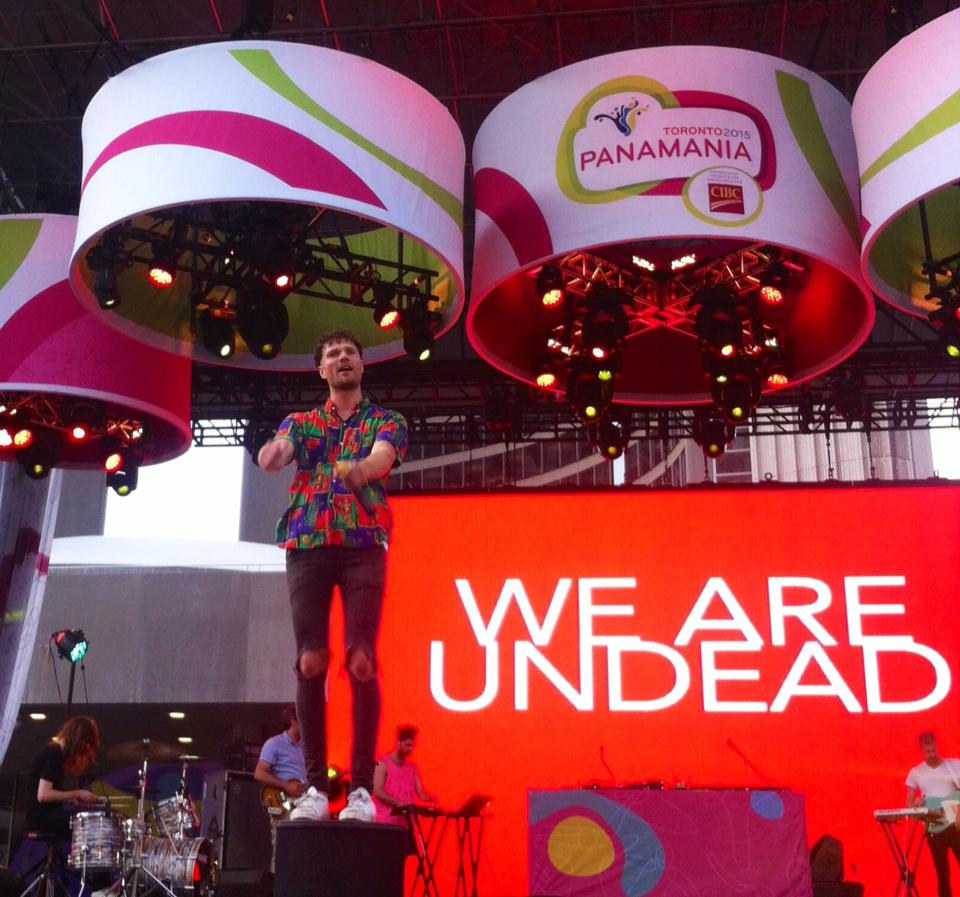 Who: Rich Aucoin
What: Panamania
Where: Nathan Phillips Square, Toronto

When I learned that Rich Aucoin was returning to Toronto to play a free show part of Panamania, I almost lost it. Having already seen him twice before I knew that I was in for an epic dance party full of confetti, sweat, cardio, and parachutes. Needless to say, I was super excited for the show and couldn’t wait to party with some fellow fans.

Rich Aucoin makes crazy electronic pop music with a twist and it’s awesome, but the great thing about his live shows is the sense of community he creates, and how much he cares about making sure his fans have a good time. At every show, you can find him dancing along in the crowd with his fans, urging them to dance with him and each other, and the fans join together as if we all know each other and are at the best house party ever. Regular Rich Aucoin shenanigans include confetti guns, balloons, fun visuals, and songs that command every cell in your being to dance uncontrollably. And of course, there’s the parachute. If you’ve never seen Rich Aucoin live before you may be a bit perplexed as to how the parachute works. Remember that big, colourful piece of cloth that you’d have at school as a kid and whenever you used it in gym class or recess it was the best day ever? Rich Aucoin throws dance parties under its colourful waves of wonder.

The show started with a galaxy depiction on the large screen behind the band and a speech urging the audience to pursue what they love, followed by a series of clips from viral YouTube videos, creating a carefree atmosphere for the rest of the night.  Opening the show was the lively number; Brian Wilson is A.L.I.V.E, which instantly brought up the energy. Rich Aucoin started on stage, with his band members who were all donned in ridiculous, yet stylish outfits and who looked like the most fun guys ever. However, a few moments into the song he swiftly stepped over the barricade and jumped into the audience to sing and dance amongst the crowd, passing the microphone to everyone near him so they could get a turn to sing their favourite song. At one point he even let a guy in the crowd hold the glitter-encrusted microphone as he rushed back on stage to his DJ booth, which probably made that fan’s night.

The rest of the set kept the party going, with no signs of stopping or slowing down. Wide dance circles were formed, the whole crowd was up and jumping the entire time, and so much confetti was thrown around that I was finding little strips in my purse for the rest of the night.

Each song proved to be a hit with the audience but there were some moments that stood out which are worth commenting on. One of those moments being the saxophone and trumpet solos that occurred amidst showers of confetti during Undead, along with the crowd enthusiastically chanting the chorus.

Another occurrence, which is pretty unique to Rich Aucoin’s shows, is how he brings the crowd together not only through dance but also through pulling everyone into the center to stack hands together as if we’re all a team rallying for a big game. He did this a couple of times, but during Let it Go, he paused for an interlude to give his fans a speech about releasing negativity and having a good time. As the music slowly started to build, the excitement grew and grew until the final chorus came back around and everyone threw their hands up to resume dancing and jumping around.

My absolute favourite songs of the night were Are You Experiencing and Want to Believe. Both of these songs are upbeat, lively numbers full of excited chants, electric beats, and have the ability to melt away anything negative and inspire nothing but good times.

I can honestly say that seeing Rich Aucoin live is something that everyone needs to do at least once. While his music is already wonderful, his live shows create such an amazing and unique experience that as a listener you get a deeper appreciation for his music, and have a twinge of feel-good nostalgia whenever you go back to re-listen to the songs.