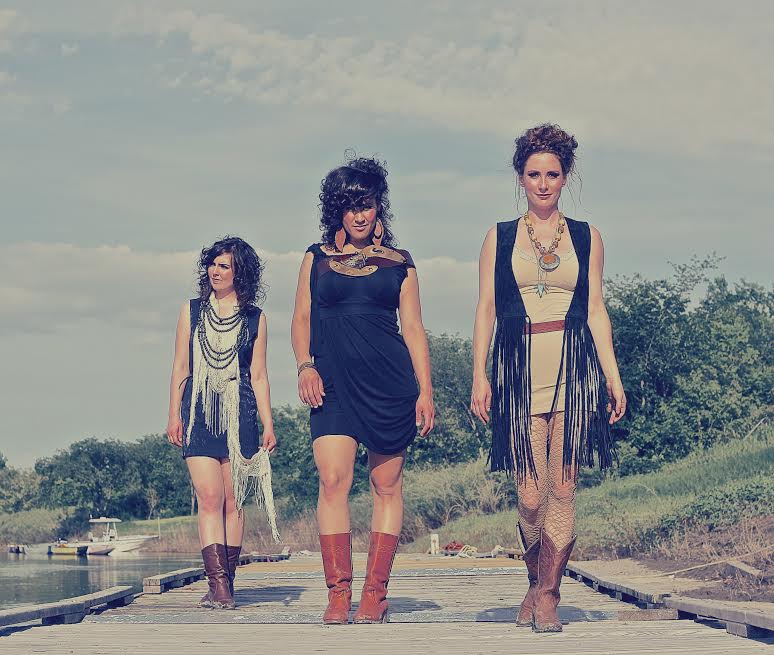 Winnipeg MB based folk/pop trio, Sweet Alibi is made up of Jess Rae Ayre, Amber Nielsen & Michelle Anderson. The three have been captivating audiences across Canada for the past few years, and are currently at it again, touring new material from their CFMA/ WCMA nominated release, “We’ve Got To”. The band also has a Pledge Music campaign on the go, so be sure to check that out: http://www.pledgemusic.com/projects/sweetalibi

The trio took some time out of their busy schedule to answer a few questions for us, about their background, their pledge campaign, and of course the upcoming album.

Jess and Michelle had met in junior high and enjoyed singing together. It wasn’t until years later that Michelle saw Jess singing in a blues band and
wanted to start a serious project. Jess suggested that we get together with her current drummers girlfriend (amber) and try to write some songs together. Not long after that we had our first show at the Standard, which is now The Handsome Daughter.

Why did you choose the name, Sweet Alibi?

We knew we wanted something with a “nice” word in it so we already had the word Sweet as a possibility. When we couldn’t all agree on a
name we started looking through the dictionary. We didn’t even get passed A, when we said “Sweet Alibi” out loud it just sort of clicked and we all liked it.

You are doing a pledge campaign to fund your upcoming album, can you tell us more about this?

You can pre-order the upcoming CD titled “Walking in the Dark” produced by Murray Pulver (The Brothers Landareth). We also have lots of
other things to offer such as homemade jewelry by Amber, homemade blush by Jess, or a painting or drawing by Michelle. You can also pick a song you would like to see us cover.

How is the pledge campaign going?

Good so far. We’ve already had a few requests for cover songs, my favorite being “Angels of Montgomery” by John Prine.

The album is to be released in November, can you give us any hints as to what we can expect from the album?

I think our writing has matured over the years, both lyrically and musically. There are some fun songs, and there are some really sad songs.
“Walking In The Dark” is the song we named the album after, and it is about Amber’s mom passing away last November.

You worked with Murray Pulver on the album, is there anyone else you’d like to work with in the future?

We were playing with the idea of working with Hawksley Workman at one point which would be awesome. I would love to keep that window
open for the future.

Can you describe your writing process to us?

Sometimes Jess or Amber will write a song, and we’ll all get together and add things to it/ rearrange it. Sometimes someone will have a guitar idea or a chorus idea and we’ll build a song around that.

We love playing across Canada with other musicians, and I think they inspire us the most. Bands like Samantha Martin and the Delta Sugar, Jaeda
Kelly, Melanie Brule, The Bros Landreth, Steve Brockly, The Crooked Brothers.

When can fans expect a tour from Sweet Alibi?

This summer! July-August. We’re touring from Northern Ontario all the way to Charlottetown P.E.I

If someone has yet to see Sweet Alibi in concert, what could be expected from a live show?

Lots of vocal harmonies and lots of stories of what our songs are about.

I think we all love Bahamas. Feist, Amelia Curran, and of course all the ones I listed above.

If you could only listen to one album for the rest of your life, which would you choose?

“Did you kiss the dog you loved when you were a little child? Will you lay in the arms of some sweet reverie a while?” -“A Town Called Amen”
by Jim White (and the rest of the lyrics of that song too)

If you were able to put together a festival, which other Canadian bands/ artists would you want to share the stage with?

All the bands listed above. We did actually get to share the stage with Buffy St Marie a while ago and she called me “Banjo Girl” and asked me to play with her, which was a huge honour.

I can’t say thank you enough to all the people who come out and support live music. Not only our music but other local bands as well. It’s what keeps us going.