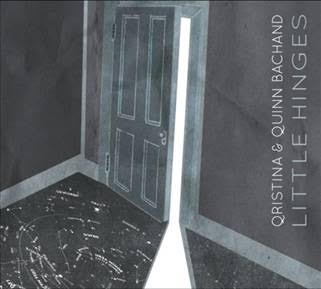 Qristina and Quinn Bachand are a brother and sister duo from Victoria, BC. The mostly play Folk music that they have created with their singing/songwriting talent. Qristina and Quinn Bachand are well known for their achievements in winning the Irish Music (Top Duo, Top Traditional Group), and recent nominations from the Canadian Folk Music and Western Canadian Music Awards.

Qristina and Quinn have released their newest album entitled ‘Little Hinges’. The album features fourteen tracks, one of which is the introduction for the album. The brother and sister duo have also released a new single and music video for the song ‘What You Do With What You’ve Got’, this is the third track on the album. I have listened to the album and was actually surprised by how good it was. I really liked that songs that has that sound you can only get when listening to Folk music. The two songs that really stuck out to me were ‘The Bachard Jigs’ (fourth track) and Never Goodbye (track twelve). Both songs have an amazing fiddle/violin melody that makes you want to dance along to them and is pleasant to listen to. Some songs are pure instrumental on the album and others have a mix of Qristina and Quinns vocals together that give that touch that will have anyone enjoying.