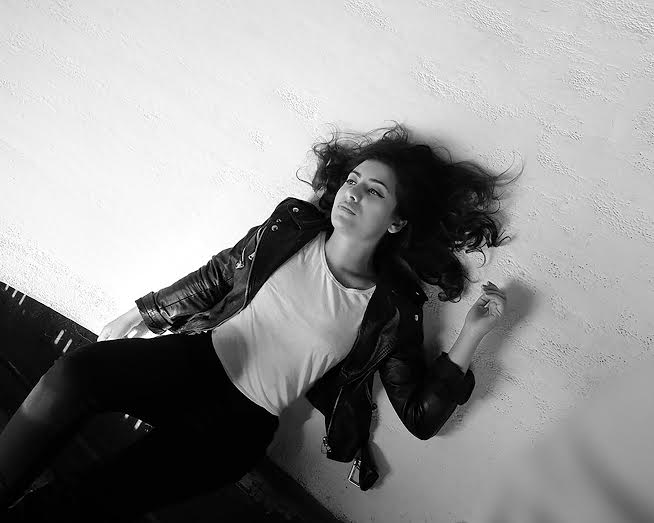 Calgary AB born, Brooklyn NY based artist, Nadia Kazmi has been hard at work, today marks the release of her new single/ video, “Dime Store Punks”, which you can see below. On top of this, she is preparing for the release of her EP, “LAMB” which will be released on August 28, 2015. Be sure to check back then for our review of the album, and until then, we’ve got you covered with the following interview!

You have released your single/ video for “Dime Store Punks”, what can you tell us about the video shoot?

Thanks for the opportunity, my pleasure. The video shoot was a lot of fun. I used a great production company A76 Productions in New York. They were right below the studio (Madpan Productions) where I was recording the EP and ended up doing a fantastic job of it. We shot the whole thing in one day right in their studio and I coordinated with the stylist using my own clothes, which I brought to the studio. Videos are a lot of work on everyone’s part and I prefer the music side of things but Duffy made it a fun experience. I ended up making friends and enjoying the experience. We were going for a classic indie look with a lot of black and white.

What made you choose this track as your single?

It has a fun vibe, it’s definitely a higher tempo and has an energy that made it the easy choice.

You are releasing your new EP, “Lamb” at the end of August.  What can you tell us about the writing process on this EP?

I used to be very lyrically driven and wrote the lyrics first initially. However, on this album I was writing some guitar licks and some lyrics, then bringing things together in ways I haven’t done in the past. Sometimes it was more difficult but I just went with it. My first instrument is voice and it’s the one I’m most comfortable with. Everything else is secondary and I play guitar/piano mostly only to write which I’m starting to change (slowly). Some of the songs are older but I went away to Nelson BC and sequestered myself for 10 days in order to finish writing. It was calming and serene at times but reflection can bring out a frenetic energy as well.

“Lamb” is a teaser for your third full-length album, which will be released in 2016, what made you decide to release an EP as a teaser?

Simply timing. I wanted to get these songs out there because I feel they’ve been with me a long time. I may or may not have some of these songs on the full-length when it comes out. Winter’s Queen is sure to be on the follow-up but besides that, I don’t know how many artists are using EPs to tease out songs from their follow-ups in this new age of music. Some still do, but the trend seems to be towards putting out shorter releases more often with fresh material and I have a whole new group of songs I’m working on now.

When did you realize you wanted to pursue music?

I think I always did but was told it wasn’t a practical choice so I went to University to study other things. It wasn’t until my first semester in Law School that I realized I couldn’t do anything else because my heart wasn’t meant for that kind of life.

Who have been your biggest musical influences so far?

I love every kind of music from old country to metal and have a special place in my heart for 60s/70s music. I would say there are many and they are diverse but they’re all left of center in some way. Definitely Leonard Cohen, who’s songs I covered on my last album (Strange Song: The Songs of Leonard Cohen), Neil Young and Crazy Horse, PJ Harvey, Nick Cave, Neko Case. My first album, Arrival, had some soul influence as well because I’ve been a die-hard Stevie Wonder fan for a long time but I like the rock side of things for my own sound so it came out as 70s soul/rock.

You haven’t released anything since 2008, how would you say your sound has changed since then?

Well, I released an album in 2010 of Leonard Cohen covers and toured to promote it but, yes, I haven’t released anything original since 2008. I’d say, I know who I am a little better and the songs are simpler in a way because they’re more direct. I like things dark and raw which I’ve come a lot closer to capturing on this effort.

You split your time between Calgary and New York.  How would you say the music scene differs between these two places?

Oh wow, a lot. Things are changing in Calgary but it’s definitely a lot more punk and folk/country in my experience. There’s room for alternative artists but it’s not as open and you have to know the right people, the scene is getting bigger but the gatekeepers are all the same. I’d say New York tends to be a lot of the same people as well but they’re open to allowing completely different acts and very strange artists into the scene. There’s a desire to encourage the oddities and many venues that cater to those kinds of bands.

Can fans expect any Canadian tour dates this summer?

Well, the EP comes out at the end of August so tour dates will mostly be in the fall. I’ll be playing shows in September in London (10th), Toronto (11th), Ottawa (12th), and Montreal (13th) Then, heading back down into the US towards NYC. Further dates in Alberta and BC are planned for October/November.

Canadian Beats is all about Canadian music. Please tell us who your current favourite Canadian bands/ artists are?

The classics: Leonard Cohen, Neil Young, Buffy St. Marie of course but lately, I’ve heard some great bands such as the Heavy Medicine Band in Ottawa as well as Bearshark which I really like. One of my best friends, Kwansa Shelley is currently the lead singer of Bran Van but her solo stuff is really great too.

Here at Canadian Beats we like to include a portion of questions that may help fans get to know something new about you, so here goes:

Ha, I was just a kid and I think it was Janet Jackson actually!

If you were able to do a duet with any other Canadian artist, who would you choose?

Leonard Cohen or Neil Young would be pretty cool.

Will you be attending any festivals this summer and if so which ones and who are you most excited to see perform live?

I attend at least a portion of the Calgary Folk Festival with my sister every year. Rhiannon Giddens is playing and I know some people in her band from NYC so I’m looking forward to seeing them,  also The Dead South, Copperhead, Adam Cohen and Lakestreet Drive.

I do not. It was a deliberate choice. Seems like everyone has one or several these days but I’m a commitment-phobe and there’s nothing more committed that inking the only skin you’ve got!

I love swimming in lakes in and around Alberta/BC or going to the mountains. I didn’t always have the appreciation for the Rockies that I now have. I’m not a big beach person because I don’t like being hot. New York summers are a test of my love for my friends out there 😉

Communicate with me. I actually respond! Find me on social media in whichever way you choose to distract yourself daily or I’ll see you on the road…