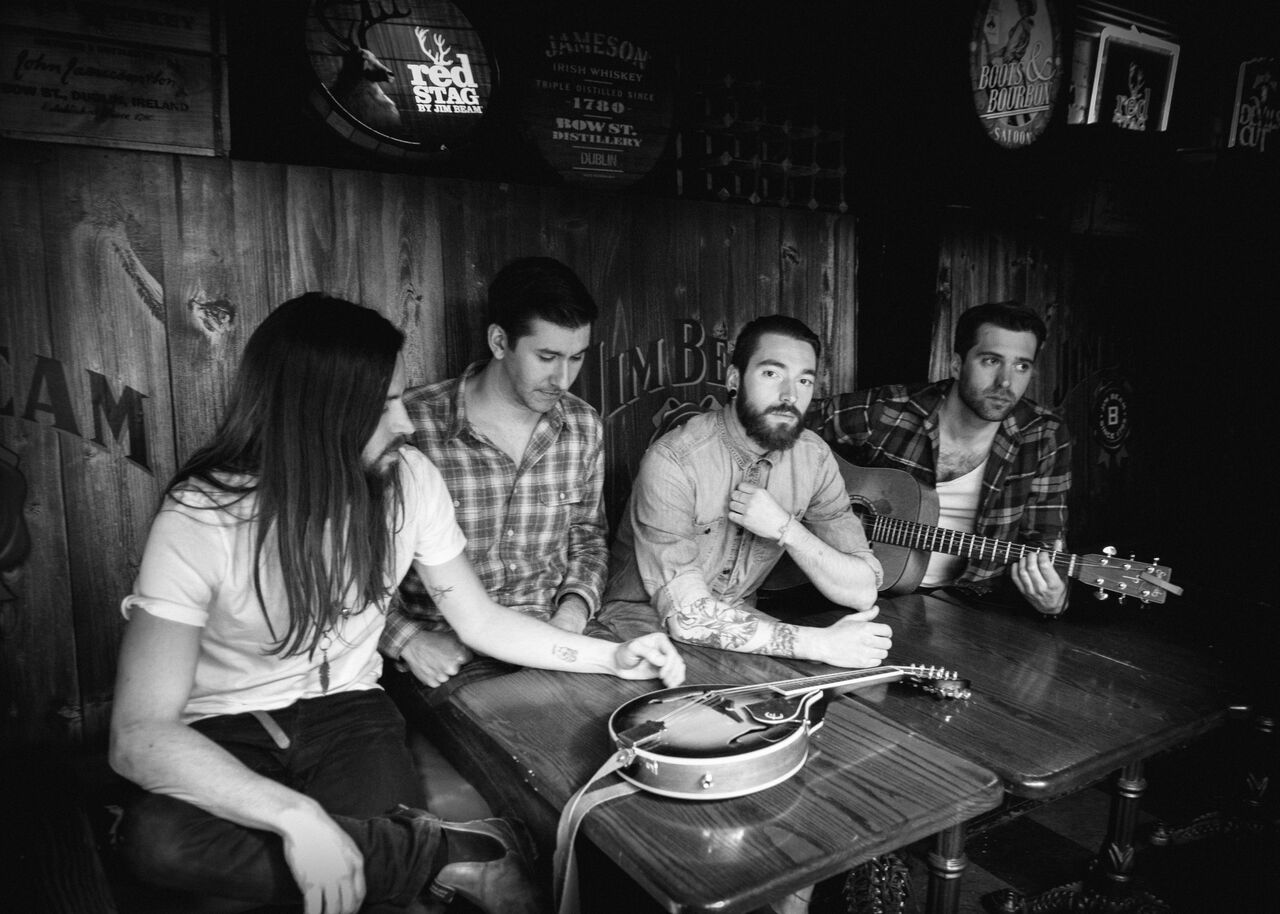 Johnson Crook is a alt/country band from Toronto.  Noel Johnson, Jared Craig, Trevor Crook and Nathan Crook came together in 2014 to make this band. Since then, they have released two singles and are looking forward to recording an EP. Stay tuned to see them at some festivals over the summer. We got the chance to interview these guys so if you’re interested in learning more, check it out!

Can you tell us what your EP will be like?

It’s hard to say what the EP it will be like at this point since we have yet to record it. We will be working with a new producer, Bill Bell, to record a new single over the summer, and then go from there. We do know what we’re after though. Overall we’re going for a “live” sound with lots of raw emotion and energy. We are putting together our best songs that we’ve written over the past year…a little bit of roots/folk with some rock thrown in there. We want people to listen and feel like they’re experiencing something new with a little bit of a throwback vibe to bands of the 70’s that explore layered harmonies like Crosby, Stills and Nash or The Band.

Do you have any more songs written for it?

Yes we do! There are currently 20 or so. Obviously not all of them can go on the album, but we are always writing, whether it be together or with other musician friends from the local community.

You say your intention wasn’t to write country music. Do you see yourself going back to your original plan?

Actually, we have no plan. We started this project last August when a one time performance together in May turned into regular jamming, then casual songwriting. When the songs and our harmonies started coming together so effortlessly, that’s when we decided to move forward as a band. The beauty of what we are playing now is that we had no preconceived notions of how we wanted it to sound; we can do anything we want!

Why did you decide to name the band the way you did?

We originally called ourselves Noel Johnson and the Crook Brothers due to time constraints for a show. Not having worked together before, that name was just the facts! We knew we needed a permanent name, and brainstorming, we went back and forth with easily 100 names without agreement. In the end, Johnson Crook just felt right. It sounded good, flowed well, and with it, we can still make a complete sentence on Twitter!

What shows do you have booked for the summer?

We just finished up our three month-long residency at The Cameron House in Toronto. Coming up, we have a monthly show at Castro’s Lounge. That place is a hub for great live music, especially roots/folk bands in the East end of the city. We are headlining a show at the legendary Horseshoe Tavern at the end of July. The big show for us this summer is the Boots & Hearts Music Festival in August. It is one of the biggest country music festivals in Canada, with a crowd of over 35,000 people. We will be one of eight bands playing their Emerging Artist Showcase. For more info on our schedule and tour dates, everyone can visit our website at johnsoncrook.com.

What can fans expect for your live performances?

People can expect to have a great time! We put a lot of energy into every show because we truly like every song that we play. Most of our show is original music, but we’ll add a few covers that we personally enjoy, although we still do our own versions of them. We put a lot of effort into crafting our sets so that we can lead our audience on an emotional journey throughout the night. From a cappella four part harmonies, acoustic ballads with bowed upright bass and mandolin, to full rock band complete with blazing guitar solos, we deliver a very dynamic show. Some shows are stripped down acoustic formats, and others are totally electric. We try to give people as much as we can! Most importantly we work very hard so that everything we put into a recording, we can do live. Check out our video for Minnedosa, Manitoba on YouTube. That’s live and done in one take!

How would you describe your experience as a band so far?

The band experience has been great. Professionally, we have been making huge strides in crafting our music and sound, but also in the caliber of shows and venues that we’re booking. We’ve had tremendous support from Coalition Music and Canada’s Music Incubator from the beginning and can’t say enough how much their influence and especially that of Vel Omazic has pushed us ahead. Personally, we’re like a family. None of our actual families live in Toronto so we’ve made our own. We’ll get together to hangout outside of music, take turns cooking dinner together with our girlfriends, dog sit for one another; it’s great!

If you could tour with any Canadian band or artist, who would it be and why?

Touring Partner: Honestly, as Canadian bands go, we would love to tour with ‘Blue Rodeo’.

The next few questions fun for the fans. It is a tradition here at Canadian Beats.

If you were a character in a TV show who would you be most like and why?

If we had to pick for the band I think we would be the Mighty Morphin’ Power Rangers. Individually we all had our own projects before Johnson Crook and were all doing well (Zords). However, when we combined our efforts into one, we are so much stronger together (Megazord!)

What is your favourite concert you’ve attended as a fan?

What is your favourite throwback song?

Thanks for all your support this far! We wouldn’t have made it anywhere without you!