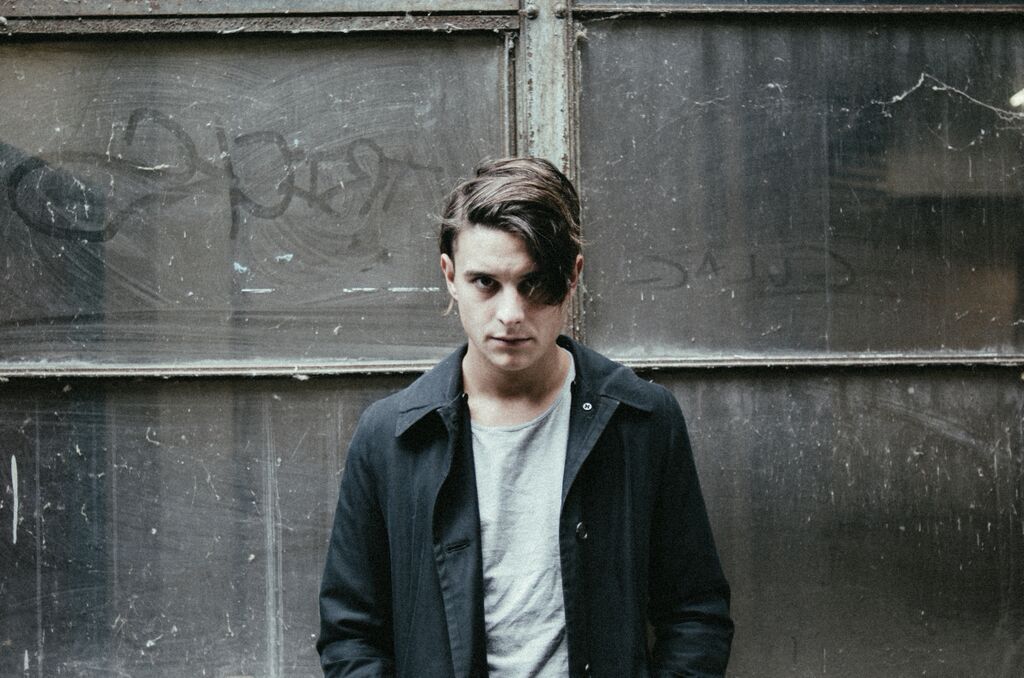 Elliot Maginot is a singer/songwriter from Montréal, Québec.  He seems to have fallen into music almost accidentally, recording some of his first works on a simple audio recorder.  His music has a magical, dreamlike state; that makes you feel an ache in your heart. His first EP was done as a home recording in 2013.  This year; in February,  his first full length album was released Young/Old/Everything.In.Between. Elliot has several shows planned this summer so be sure to see if he is coming to a city near you!

How did you learn to play guitar?

I just picked one up one day and started to play. I wouldn’t say it’s an easy instrument to be good at but it’s pretty easy to make people believe you are. I started to teach myself more seriously, because I didn’t have enough skills or knowledge to actually play the songs I was composing…

Did you always know you could sing? Or was it something that evolved over time?

I got into singing pretty late in my life. It’s a pretty hard thing to do when there are people around. I mean, even now, if I’m not on a stage, I only sing if I’m sure no one can hear me. There something about it that makes you feel very naked and vulnerable.

Who are your other band members? How long have you known them?

So there is Jesse Mac Cormack on synths, bass and guitar. I’ve known him for a while now. He’s pretty well known in the Montreal indie scene and I’ve always been a big fan of his work. Four years ago, I realized we were neighbors and we’ve been friends ever since.

Jean-Philippe Hébert plays guitar and bass. I’ve known him for maybe 4 years or so. He used to date my best friend’s sister, so that’s how we met. He’s also played with pretty much every good singer-songwriter in Montreal.

And finally there’s Mathieu Leguerrier on drums and back vocal. Funny enough I met him on craigslist two years ago. He’s a very creative drummer and an amazing singer! He’s also involved in other great projects including a solo project called Afrakite!

I hear some influences from bands like The Cure in your music. Who do you think has influenced your sound?

I like sad and nostalgic music a lot but my background is also deeply rooted in folk music. I’m a big words lover as well. So I guess a lot of artists have influenced me, including Dylan, Cohen, Nick Drake, Bon Iver, Sigur Ros, The tallest Man on Earth, and Joni Mitchell.

You have one song in French on your album, do you usually write mostly in English? Do you plan to write some more in French in the future?

Of course! I mean, my only criteria for releasing a song is: do I like it? Language is not an issue at all for me. I have the privilege to live in a city where basically every one (of my generation, at least) speaks both English and French. So far It’s been easier for me to write in English because… god knows why, but it’s not a choice… it just happens.  I’m a proud francophone but I also feel blessed that people from everywhere around the world can understand my lyrics…

I really enjoy the song Monsters at War, can you tell us a bit more about this song?

That song is very special for a lot of reasons. It’s the first song I ever wrote, and it seems to be a favorite for a lot of people. When I listen to it now, I find the lyrics to be very naïve but maybe that’s why people relate to it so much. It’s hard for a songwriter to explain what their songs are about (at least it is for me) without sounding very dramatic or self centered but in a nutshell, this song is about dealing with mental health issues and the feeling of ‘’me against the world’’ feeling it can create.

I see that you have decided to keep your name hidden, and chosen a pseudonym name.  Why is that?

Just because I could, really. When I started this project, I had no interests in being the person I was or leading the life I was leading. Music has always been a mean of escape.  I just created a parallel life where I could be who I wanted.

Do you have a song that is a favorite of yours to play live?

That would be ‘’Still Alive’’. It’s a very bouncy song (for an Elliot Maginot song…) and I just feel at the right place at the right moment whenever I play it.

Your lyrics are just beautiful, have you always written poetry?

Words and literature have always been a big part of my life. I guess that’s why it took so long before I dared writing my own texts and lyrics. Writing lyrics that I consider meaningful is probably my greatest struggle, but it’s also my greatest satisfaction when I succeed.

We like to ask a few questions at Canadian Beats that let our readers learn more about you.

If you could collaborate with anyone on a song who would it be with?

What is your favorite song by another artist?

Right now I’m thinking ‘Case of you’ by Joni Mitchell

Is there a venue anywhere in the world that you aspire to play on?

The White House. Heard it’s pretty hard to get the gig.

What is something quirky about you?

A lot of things are quirky about me…

Do you have a favorite snack food?

I get by on fresh water and love.