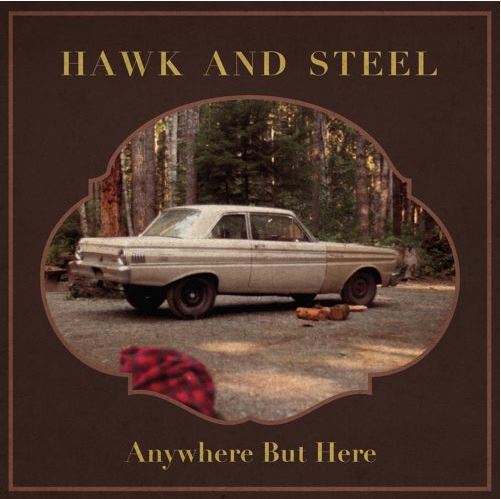 Hawk and Steel is a Alternative country band from Victoria, BC. Hawk and Steel took a couple years from their first album, ‘Danger Road’ released in 2012 to find the desired sound and genre they wanted. The band consists of four members Peter Gardner, Ian Johnson, Rob Walsh, and Marshall Wildman. Hawk and Steel’s newest album ‘Anywhere But Here’ includes some of the bands close friends as well.

‘Anywhere But Here’ is Hawk and Steel’s second full length album. The album features 13 tracks all showcasing that desired sound the band switched to when creating ‘Anywhere But Here’. Hawk and Steel has put a lot of work into creating this album and also features their close friends Marc Jenkins, Julia Knight, and Nathan Shubert. After listening to the full album a couple of times I was able to pick out my top songs from it, ‘David And Katie’ (track one) and ‘Fire In The Wind’ (track four). ‘David And Katie’ is a song about how life can change so quickly. I like the story the song tells and enjoyed listening to it. ‘Fire In The Wind’ is a beautiful  acoustic song which features vocals from Julia Knight. If you want a country band that sounds amazing and like nothing else you have heard I suggest you take a listen to Hawk and Steel.