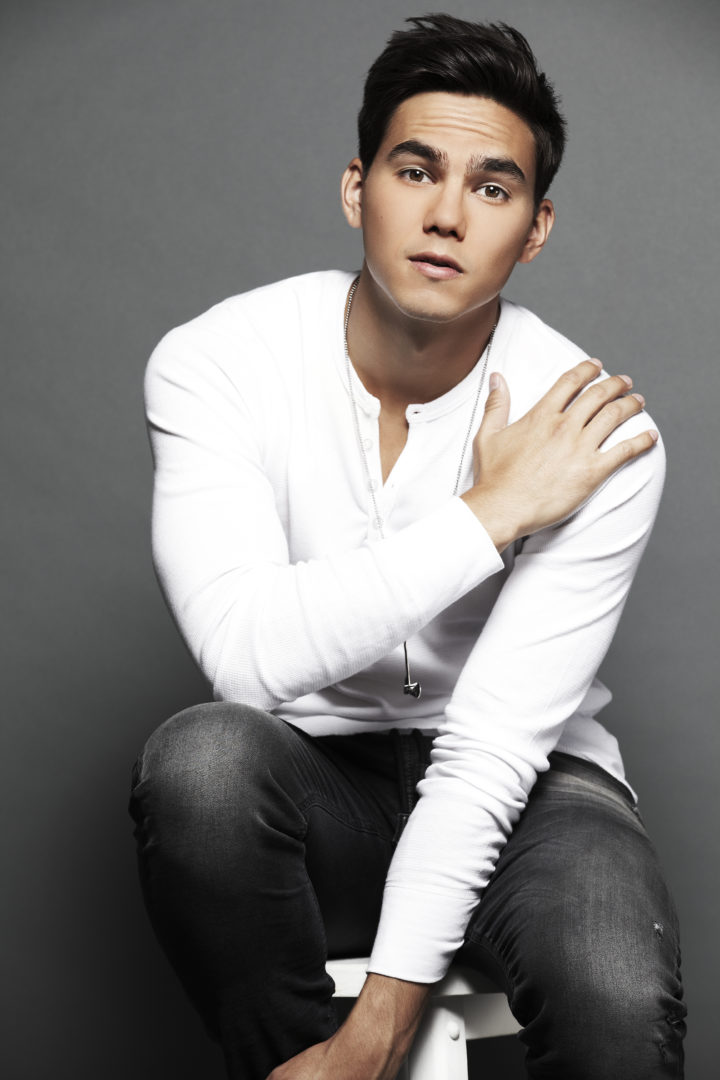 Tyler Shaw is becoming a Canadian pop sensation ever since winning the Much Music Coca Cola covers contest in 2012.

Tyler has been very busy recently releasing his single “House of Cards” and getting ready to release a full length album, all the while planning to go out on tour with Kelly Clarkson and Nick Jonas for the Canadian leg of their tour in the fall. We were lucky enough to catch up with Tyler via telephone interview to chat about music, touring and what makes him tick. Check out what he had to say below.

You have a big tour coming up here in the fall with Kelly Clarkson and Nick Jonas, what are you most excited for?

Honestly just everything, the experience, meeting her! I actually have a plan I wanna go up to Nick Jonas and kinda challenge him to an arm wrestle see how that kinda goes out. But I’m excited for the whole shenanigans of it, the traveling, just the whole experience. Playing in front of a giant crowd like that with that kind of atmosphere.

Who do you think would win in the arm wrestle between you and Nick Jonas?

Oh I don’t know (laughs) I really don’t know. I’m going to start hitting the gym though, he’s a good looking buff guy so I’m sure I need to train!(laughs)

You got your start after winning the Coca Cola Much Music covers contest, what is your fondest memory of that whole experience?

Being caught by surprise, because I entered the contest kinda like okay I’ll give it a shot. Not a lot of people know this but a few months before that I actually auditioned for Canada’s got Talent, but I didn’t get chosen so I kinda like got down on myself or whatever so my roommate found this contest and showed it to me so I entered it thinking I probably won’t even make it. But they called me a few weeks later “you made top ten” and so on and I ended up winning the whole thing. And I was like holy cow that was a turn of events.

You have done quite a few covers over time, what is your favourite cover that you have ever done?

Last summer I did do “I Want it That Way” by the Backstreet Boys, it’s not online but I did play it at my live show so that was a fun one!

At the beginning I was actually trying to be a professional soccer player so maybe I’d be pursuing that dream.

You just recently released the video for House of Cards, it’s like a mini movie, so have you ever thought about getting into acting on the side?

I have actually! My brother is an actor and he’s always like “hey Tyler let’s do this and that” and I haven’t really thought about it seriously, but after being in “House of Cards” you know kinda like a small movie trailer thing, I love it! I really do! It’s a fun thing to do. So maybe down the road once I get this music thing more, more in depth in my career then who knows I’ll try the acting thing.

You are very active on social media with your Facebook and Twitter, how important do you think that is in the music industry today?

It’s gotta be number one honestly! If you don’t have a fan base then you don’t have much because the fans keep you alive and they keep the passion going and keep everything running smoothly. It’s kinda good I love doing it. Fans want to know what you’re up to 24/7 so to let them into your life like that I have no problem with that. Of course there’s a fine line between your career and your personal life, but they want to know everything so you let them in as much as you can. But yeah like I said, it’s number one for sure.

So speaking of fans, you have a pretty impressive fan base, what’s your craziest fan encounter thus far?

Echo Beach in Toronto two summers ago. After the show I went backstage and I had to go out to the front to go to my merch booth, there was a barricade between my fans and I and they were just up against the fence like yelling and screaming it was insane! And security had to make like a ring around me to like keep me safe so I could walk over to the merch booth. It was really really cool.

You do quite a bit of work with Free the Children, what made you decide to get involved?

Honestly, back in grade 8 I heard about Craig Kielburger and what he did for his class and I was like oh my god that’s so cool! And ironically I won this contest and Coca Cola had a relationship with Free the Children so they set me up with them. I was like wow this is perfect! So you know I love their message, I love what they are all about and I was very excited to start working with them. They have been amazing keeping me involved and stuff so yeah they are good people.

You did a trip to Kenya with them, what was the biggest thing you took away from that trip?

They are the happiest people alive with next to nothing it’s incredible. We definitely take things for granted out here in North America. They have roofs with tin on them, mud walls and a soccer ball made of string and garbage, but they are smiling all the time, dancing and having fun it’s crazy!

If you had to describe your music in three or four words, what would you call it?

It was definitely a hobby playing opening mic nights every now and then, I didn’t really take it seriously until I entered the covers contest and I was like oh maybe I have something and then Sony ended up signing me and I was like okay this is serious stuff so I started getting super serious about it.

How did it make you feel to hear your song on the radio for the first time?

I think I almost cried it was pretty cool. I don’t remember what my facial expression was like but it was definitely something.

Here at Canadian Beats we like to include a “just for fun” portion to help your fans get to know you better, here we go..

If you had to name three things non music related that you can’t live without what would they be?

Soccer ball, stuffed animal of some sort and a deck of cards.

What is one thing your fans would be surprised to learn about you?

I love the northern lights, I’m all about space. I’m very nerdy like that I love planets and I love stars and all that kinda stuff, so maybe that.

oh boy! I don’t know, to be honest with you that’s a tough one. I don’t get embarrassed that much, that easily. I can’t think of any honestly.

How do you handle slip ups on stage?

I don’t handle them very well. If I do slip up forget a lyric or something I’ll try and play it cool but it will probably come off as like a (gargle sound) but you know, you try to do your best (laughs)

What kinds of things can we find you doing on your days off?

Going for runs, exercising, going for walks. If there’s a lake nearby or a trail. Just going outside, I really love the outdoors coming from BC I love the woods, I love the trees, I love the wilderness.

If you could do a duet with any Canadian artist or group who would you choose and why?

Ummm It would be weird but kinda fun to do with uh Hedley, that would be kinda weird but interesting! You never know!

What advice would you give anyone wanting to make a career in music?

Honestly I’m not going to be sweet about it or lie but it is a tough industry and you do need talent but you need a bit of luck to, right place, right time kinda thing. But if you stick it out, believe me when I say this when I first started out I was awful! Ask anyone I went to high school with I was really bad but I just kept with it and you know with encouragement from my family and friends I got better and better. So if you stick with it, never give up kinda thing and you never know.

If you could pin it down to any one artist, who inspired you to get into music?

Growing up I had a few stages in my life where I had like musical influences so like my early stages I was into like Rage Against the Machine, Sum 41 and Green Day you know rock bands. And then something happened, I don’t know what, but I started to listen to John Mayer, Jack Johnston, Michael Buble, you know easy listening type stuff. So collectively all of those groups have some influence in my music.

What do you think sets you apart from other artists out there?

My personality! I don’t feel like one person is the same as the other. So I think if you get to meet me you would see oh he’s definitely not like this guy or that guy. I like to think I have my own personality and I’m my own person and I hope that comes across in my music.

If you could spend the day with anyone dead or alive who would it be and what would you do?

I think I’d grab an ice cream cone and go to a bowling alley with Elvis. And yeah let’s just leave it at that (laughs)

And finally, do you have anything you would like to say to your fans?

I LOVE you guys so much! I wouldn’t be here without you! I hope to see you soon! Xoxo!